The Afterlife of Political Posters 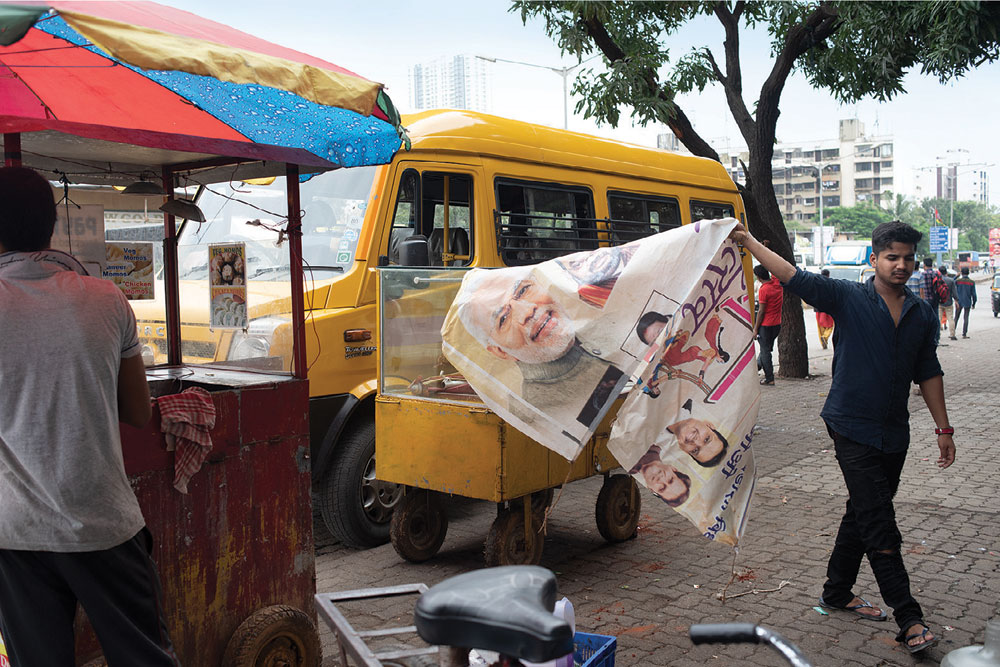 
THE POLITICAL POSTER is a ubiquitous feature of Indian life. It fills up our skies and crowds our public spaces. Its protagonists may keep changing (or not), and their ideologies may differ. But their format and content—a smiling countenance to soften a pitted history, arms folded in greeting—consistently remains the same. With one election or another always imminent, it also becomes something of a permanent fixture like a tree of flex and vinyl.

But what goes up has to come down. So, what happens to these hoardings at the end of election campaigns?

For a handful of individuals, such as the photojournalist covering an election, the political hoarding dominates his/her visual psyche. Peering through their viewfinders, an election can sometimes occur like a vulgar spectacle of flex and vinyl. Ritesh Uttamchandani, a photojournalist, who has worked among other places at Open magazine, had some of these questions on his mind, when he began to notice the rich afterlife of these entities.

It began in 2004, when at the workshop of idol makers in Mumbai’s Chinchpokli area, he noticed an incomplete idol of the goddess Durga wrapped in the poster of a Congress election rally. It had been done to help the structure retain its moisture and to stop it from cracking, but it looked as if, Uttamchandani says, it was a model in a soap ad or an actor in a Bollywood song. Over the years, as he made his way through the city hopping from one assignment to another, this ingenious use of posters would pop up again and again, whether it was to wrap an idol, to provide some shade, a place for hawkers to sell their wares, or just became as a shelter for a homeless person to catch a wink on. 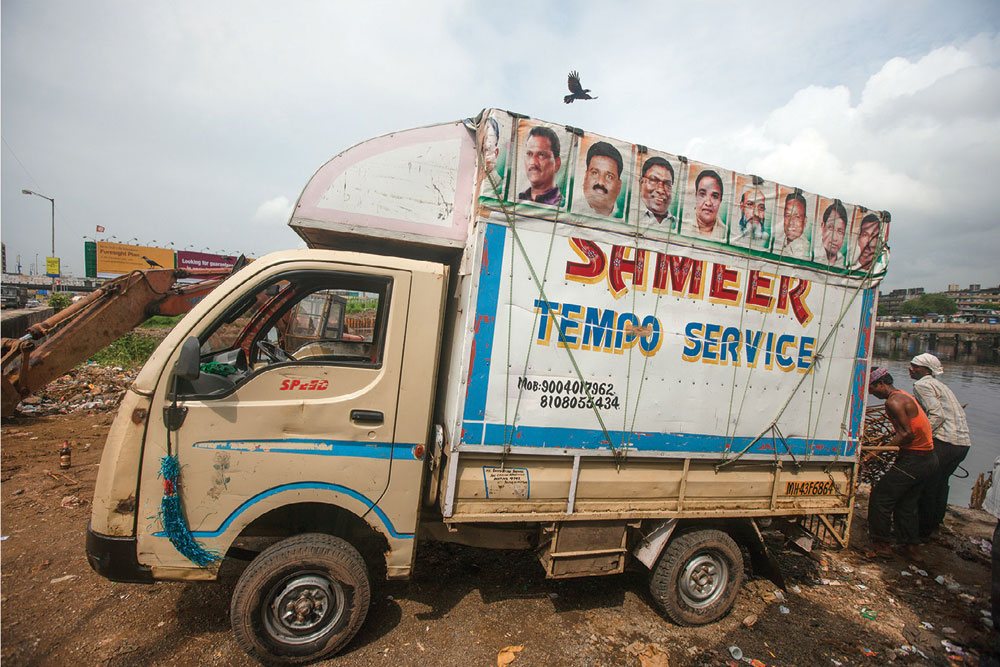 A collection of 21 of these photographs are now part of Uttamchandani’s first solo exhibition titled A Lease of Life at the Cymroza Art Gallery in Mumbai. Another element—parts of Uttamchandani’s 2018 photo-book The Red Cat and Other Stories about Mumbai—forms a second layer of the exhibition.

The pictures at the exhibition are not pretty photographs in the traditional sense of the term; and they are certainly not those that typically adorn art galleries. They are neither staged nor contain romanticised visuals of Mumbai. They carry instead a photojournalist’s aesthetic. The type of visuals your eyes might notice in passing, but your mind barely registers. Until someone like Uttamchandani brings them to notice. Some of them capture moments of real tenderness. Like the visual of a young boy seated at a thela, a politician’s face visible under the vegetables, as he rests his head and his palms on a kilogram
of weight.

Almost every picture at the exhibition also evokes a wry sense of humour. Sometimes the guts of fish are being spilled on to these posters, and sometimes they are being held by clothespins at a fruit stall. In one visual, the dismal future of a brand new hoarding looks certain when below it, a group of women hawkers stand with an old hoarding wrapped around their stall.

In his photos, there is a comic contrast between politics as an event and the city’s mundane everyday. How after a profligate night of political spectacle, the city awakes the next morning like after a bad acid trip and transforms what remains of the night before into something more useful.

The art critic and poet Ranjit Hoskote who has curated the exhibition writes in his curator’s note, “A Lease of Life presents a suite of photographs dedicated to the afterlives of political posters, recrafted to serve as awnings for informal businesses, backdrops to tea stalls, working surfaces in fish markets, and mattresses for pavement dwellers. Prized for their sturdiness, these flex or vinyl sheets retain their original imagery, which is now thrust into unexpected, delightfully bizarre relationships with everyday objects.” 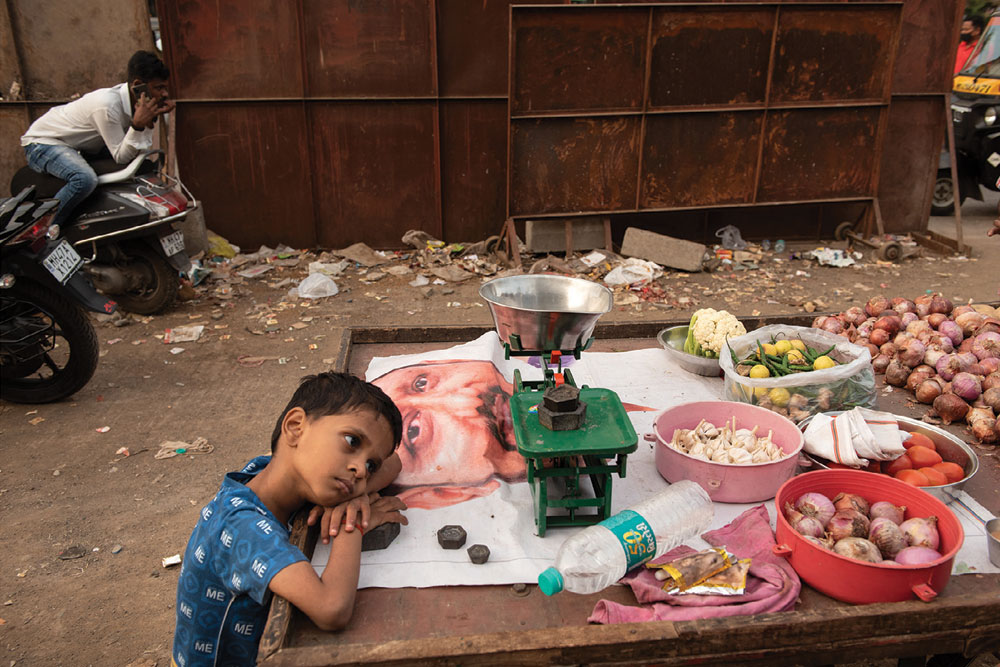 Uttamchandani’s works have always carried a deep empathy towards his subjects, something Hoskote also mentions in his note. Once while on an assignment to photograph a brothel, searching for a humane way of telling a story instead of resorting to cliches, he took a series of photographs of the ceilings of brothels. This would be the only thing the sex workers see every day without fail, he writes on his website. Uttamchandani lay on the beds of these workers, or sometimes placed a camera with a self-timer, to take very moving pictures. Some ceilings contained pictures of a family member, and some had photos of them with a Bollywood hero photoshopped into it. On another occasion, trying to find a picture of a Mumbai local that would be different from the rest, he dangerously climbed atop the roof of a train to take a picture of those who travelled atop them. One sees many of these attempts to do away with cliches and romanticised visuals of Mumbai in Uttamchandani’s current exhibition.

While the first picture in this series goes back to 2004, he began to photograph most of them only after 2009. Once while covering the annual Queer Pride march in Mumbai, he noticed the picture of a fruit-stall using a poster. But after completing his assignment, when he returned to the spot, it had disappeared. “It was just there and then gone,” he says, pointing out the temporary nature of many of these establishments that used such hoardings. Yet many days later, a friend called telling him that she had just spotted a fruit-stall using a similar poster in another part of the city, and he rushed to the location.

Uttamchandani also built contacts with contractors in charge of putting up these hoardings. He would pester them with requests to inform him whenever they were about to mount them. But they would invariably put them up without informing him. “They probably thought I was some crazy guy, or some official, and that they might get into trouble,” he says.

He would however stay back after election meetings and rallies to observe what happened to these posters right after. He would find people waiting patiently for the proceedings to wind down so they could take a poster home. Once a rickshaw driver appeared out of nowhere, and with a few deft moves, packed up a giant poster into his vehicle and drove away. Then, a group of policemen stole a handful. Uttamchandani also found that something of an informal economy exists around these posters, with many of them available for sale after their intended purpose is served.

Politicians make several promises during their campaign trails, and invariably fail to keep them. At least with these banners, some unexpected assurances remain.

(A Lease of Life by Ritesh Uttamchandani runs at Cymroza Art Gallery, Mumbai, till February 28th)