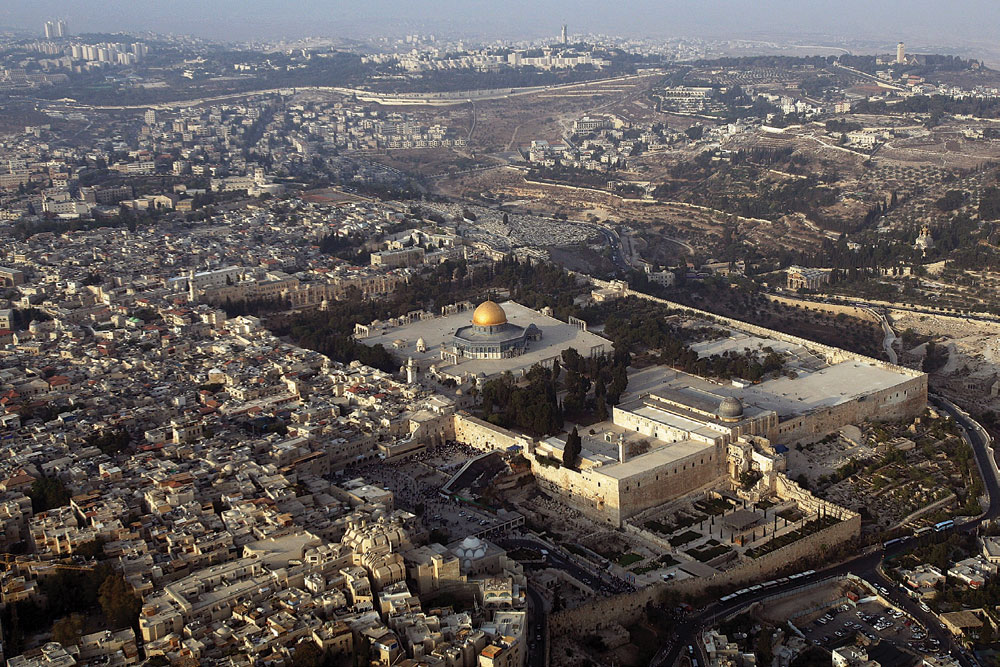 
BEFORE ALLAH ASKED Muhammad to turn towards the Kaaba in Mecca, the Prophet had directed his followers to face the Temple Mount in Jerusalem in prayer. That was in the early days of Islam. The Prophet made his journey to Jerusalem in a single night and ascended to heaven at the spot where the Foundation Stone lies inside the Dome of the Rock today. Jerusalem is not as holy in Islam as Mecca, but it is holy enough—the third holiest, in fact. Here stand the Haram esh-Sharif (al-Haram al-Sharif) or the Noble Sanctuary, and the Farthest Mosque, al-Masjid al-Aqsa, or Al Aqsa. The Hadith testifies to Al Aqsa’s location in Jerusalem.

The compound that houses the Dome of the Rock and Al Aqsa, as well as the Western Wall—the remnant of the Second Temple—is a plateau with the Mount of Olives to the east, the Jewish Quarter to the west and the Muslim Quarter to the north and west, in the Old City of Jerusalem. This Jebusite threshing floor was bought by David for 50 pieces of silver to build a sanctuary and erect an altar to YWHW. It was the site of Solomon’s Temple, of which no archaeological evidence remains, and that of the Second Temple, the construction of which began under Cyrus the Great and was expanded and renovated by Herod. The Temple Mount is the holiest site for Jews, where stood the Holy of Holies. But ‘Temple Mount’ appears to have gained currency only after the destruction of the Second Temple in 70CE.

When Israel united Jerusalem, or occupied East Jerusalem, after the Six-Day War of 1967, Shlomo Goren, the Chief Rabbi of the Israel Defense Forces had led his soldiers on to the Temple Mount to celebrate. Within hours, the Chief Rabbis of Israel broadcast a warning that Jews were not allowed to enter or pray at the site. (There’s religious logic to this: since the Divine Presence never departed, it is sacrilegious for Jews to walk on the Temple Mount till the Temple is rebuilt.) The status quo, with overall sovereignty and security remaining in the hands of Israel but the Haram esh-Sharif itself with the Islamic Waqf of Jerusalem under Jordanian custodianship, has been disturbed many times, by both Jews and Arabs, with militant Jews demanding to pray at the site while Ramzan gatherings at Al Aqsa have often turned into battles with the police. When Hamas fired rockets at Jerusalem this week, it broke what Israeli defence correspondent Amos Harel calls ‘the unwritten rules’. Jerusalem was not to be targeted.

A stone’s throw from this shared and contested history are the Christian and Armenian Quarters, the former the site of the Church of the Holy Sepulchre, technically the holiest in Christianity despite Rome upstaging Jerusalem. The New Testament identifies Herod’s temple with many events in the life of Christ. The Temple Mount was venerated by Christians till the destruction of the Second Temple which, taken as a fulfilment of Christ’s prophecy (Matthew: “Not one stone will be left here upon another; all will be thrown down”) and the triumph of the New Covenant, shifted Christian attention away.

Jerusalem—Yerushalayim to Jews, Al Quds to Muslims—cannot be abandoned, nor monopolised, by any of the Abrahamic faiths. The Foundation Stone, from which the Prophet ascended to heaven, is, in Judaism, the entity from which the world was created and expanded into its present dimensions. According to the Book of Chronicles, the Temple Mount is also Mount Moriah where Abraham had brought Isaac to sacrifice him (although now it is widely believed to be located elsewhere). Maybe there is an irony of faith why the Israeli-Palestinian conflict has kept the Temple Mount at its heart. Judaism located the divine presence here; Islam noted its sanctity and revered it but as one among others; Christianity, to go by Christ’s admonition of the Samaritan woman, should not ideally fixate on place (John: “The hour is coming when neither on this mountain nor in Jerusalem will you worship the Father…God is spirit, and those who worship him must worship in spirit and truth”).

Jerusalem is the horns of a dilemma. How do you divide what cannot be divided? How do you ensure every entitled side shares what belongs to all? Perhaps no one thought a synagogue would be torched in Israel in the 21st century. Perhaps one would have hoped death tolls in Gaza would be markedly lower by now. But an old conflict, when allowed to fester, will bite back. And what should unite will only cause misery and death.