The santoor maestro epitomises the dictum that music has no religion 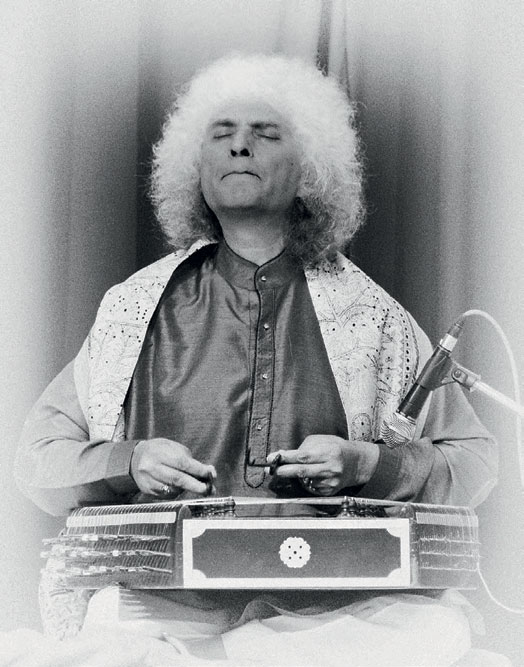 
FEW ARE ABLE to bridge the gap between the esoteric classical arts and their more popular ver­sion. Birju Maharaj did so in dance, Ravi Shankar did so with the sitar. Shiv Kumar Sharma was unique in that he was able to introduce a third element—folk—and bring it to the attention of the connoisseurs as well as more mainstream audiences who learnt to identify Yash Chopra’s lush romances with the mellow strains of Kashmir’s Sufiyana instrument.

A gifted child who played the tabla on SD Burman’s immortal song, ‘Mose chhal kiye jaaye’, from Vijay Anand’s Guide (1965), Sharma turned his at­tention to the santoor, rescuing it from obscurity, updating it, and performing classical music with it. He did it at the behest of his father and guru, Uma Dutt Sharma, who believed his name would become synony­mous with the santoor.

It did, but it took years of sadhana (practice) and align­ment of mann (thought), vachan (speech) and karam (action). Sharma believed music was a spiritual journey. “Musicians simply cannot be made in one lifetime,” he once said to Ina Puri in the book Shiv Kumar Sharma: The Man & His Music (2014). Indeed, the first time he played the santoor was for radio in 1952, which means his com­mitment to the instrument spanned 70 years. It survived many distractions. KA Abbas wanted him to be one of the heroes in Saat Hin­dustani (1969), along with Amitabh Bachchan. He refused. V Shantaram wanted him to compose for his film when he was a mere 17-year-old. He refused, citing his school-leav­ing exams. As part of the popular duo, Shiv-Hari (flautist Hariprasad Chaurasia), he was busy composing film music almost exclusively for Yash Chopra who understood their rhythm. But the two men called it a day at the height of their success because it interfered with their classical prac­tice. Sharma always listened to the antardhwani, the voice within, also the name of the documentary by Jabbar Patel.

Talent alone is never enough. It needs to be matched with concentration. Inspiration he had in plenty, whether it was his Himachali mother’s folk songs as she did her daily chores or the symphonies he listened to on Radio Delhi as a schoolboy. His work in Mumbai, playing the tabla and then the santoor on a series of bewitching songs that defined Kashmir to the rest of India, from Shammi Kapoor serenad­ing Sharmila Tagore with ‘Taareef karoon kya uski jisne tumhen banaaya’ in Kashmir Ki Kali (1964) to Shashi Kapoor singing ‘Pardesiyon se na akhiya milana’ in Jab Kab Phool Khile (1965). He ensured the santoor found a permanent place in the pantheon of musical instruments, its soothing sound mirroring the water of the Lidder flowing over rocks in Pahalgam and the sound of the wind in the pine trees on the horse-ride to Gulmarg.

Sharma was an ambassador of Jammu and Kashmir in the cultural heart of the country, Mumbai, his adopted home since 1960. And he represented the best of Kashmiriyat—a Hin­du born in Jammu who updated a Sufiyana instrument from the Valley and took it to the world, proving yet again that music has neither a region nor a religion. His music had elevated him above the joys and sorrows of success and failure. He believed one had to do everything in life, flourish and achieve success, but in a detached manner. His spirit, like his mane of silvery curls, always defied gravity. Like the finest of artists, he was of this world and yet apart, carrying the lightness of his greatness like one of his favourite Kashmiri shawls.

His concern was that the santoor would end with him, and that is why he took to teaching, not merely his son, Rahul, but others as well. “It’s not like you get a degree and a PhD and then you’re given a job for life, and after that, a pension. This profession is not like that,” he once said. You have to prove yourself every day and keep learn­ing and keep adding something different to your music.” Not only will his music live on, so will the santoor itself.