Rajinikanth keeps his promise and enters politics. How does it change the dynamics of the battle for Tamil Nadu 2021? 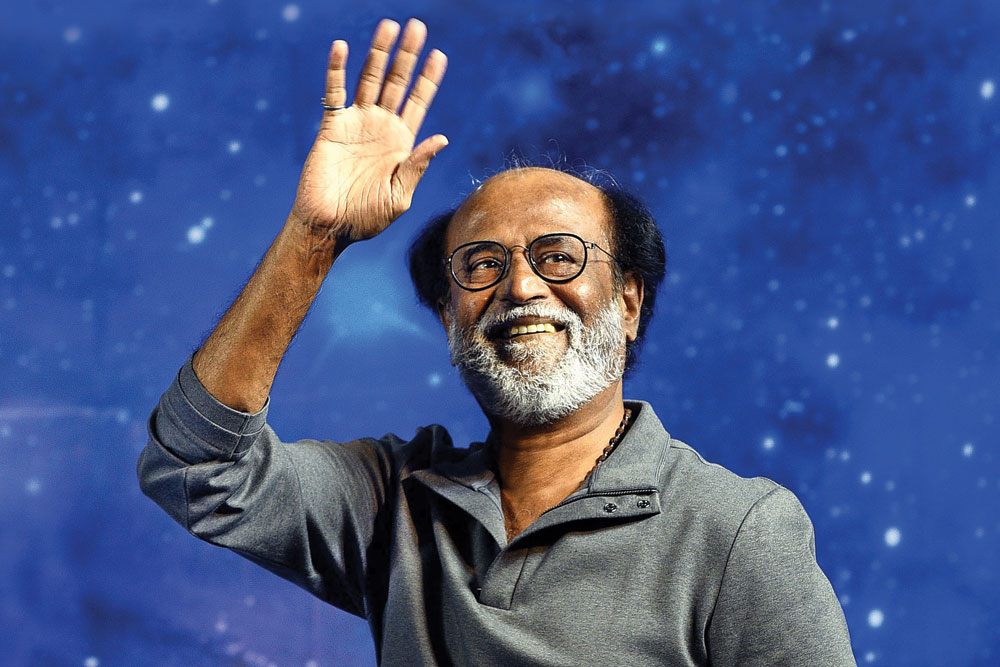 
THERE IS NO history of a man who is too greedy or a woman who is too haughty ever having lived well.” The dialogue from Padayappa (1999) does not translate well. To fans of superstar Rajinikanth, it seemed a deliberate political statement against the Manichean duality of Tamil politics, where power constantly shifted back and forth between M Karunanidhi and J Jayalalithaa. But if Rajinikanth was suggesting that the Tamil people could use a leader with no intellectual vanity or personal ambition, he himself was not ready for the meta-responsibility, at least not yet. Only after the All India Anna Dravida Munnetra Kazhagam (AIADMK) leader Jayalalithaa’s death in 2016 and amidst DMK patriarch Karunanidhi’s illness did he propose to launch a party and contest all 234 constituencies in the state. It has taken him three long years to act on that promise. After launching the balloon in December 2017, the 70-year-old actor finally dropped the payload on December 3rd, 2020, ending the suspense about his political foray. “It is now or never,” he admitted, even as he exulted that the new party, to be launched in January, “… will win the Assembly polls and give honest, transparent, corruption-free, spiritual, secular politics without caste, creed or religion.” The quixotic announcement had the desired effect—it rattled politicians into crunching their numbers, forced TV panelists to explain his orotund claims of the “wonder and miracle” that he was about to perform, and got his fanclub network, the Rajini Makkal Mandram (RMM), to clink glasses in celebration. But did he have a plan? How would he face elections within five months of launching a party? What about fundraising, training and organising cadres, coming up with a manifesto, and campaigning in the shadow of Covid-19? “We don’t think we are running out of time. Five months is plenty for someone like Rajinikanth who already has a large support base,” says his political advisor Tamilaruvi Manian, speaking exclusively to Open. “And he is wise; he did something last year—he made RMM concentrate on forming booth committees. So now, in each constituency, we have committees ready to spring into action across 250-300 booths. No party in the state other than AIADMK and DMK have that kind of ground level presence.” An RMM member from Tiruchirappalli who runs a convenience store echoes Manian’s optimism. “Rajinikanth’s campaign had begun the day the media started discussing his entry into politics. When (Chief Minister) Edappadi Palanisamy or (Deputy Chief Minister) O Paneerselvam visits a flood-affected area, it makes headlines. When (DMK’s chief ministerial candidate) MK Stalin addresses a farmers’ protest, it makes news. But Superstar only has to step out of his home to make news. The dynamics are different for Rajini.”

AS TAMIL NADU’S most loved film icon, Rajinikanth does inhabit a space where facts and obsessions meld—a space that had fallen vacant after the death of Jayalalithaa. Since the 1960s, DMK and AIADMK have relied as much on personality cults as on ideology to build intense loyalties among voters that have lasted generations. The crucial difference between Rajinikanth and MG Ramachandran, who had been anointed god on earth and voted to power in 1977 after splitting from DMK to form his own party, is that while MGR promised to personally lead Tamil Nadu through a golden age—as did his successor Jayalalithaa—Rajinikanth is an advocate for change, without positioning himself as the change. By declining to be the chief ministerial candidate, he is refusing to star in the most awaited production of his life. He is yet to clarify if he will contest the polls or forge alliances. “Not being the party’s chief ministerial candidate is his decision but RMM does not accept it, neither will voters. I think, in due course, we may be able to persuade him to change his mind,” says Manian, the Tamil politician, orator and founder of a Gandhian forum who is set to assume the role of party supervisor. Manian was by Rajinikanth’s side when he made the announcement, as was a mysterious figure, whom the star introduced as Dr R Arjuna Murthy, the chief co-ordinator of the party. Murthy, who briefly served as head of Tamil Nadu BJP’s Intellectual Cell before joining Rajinikanth, is said to be a longtime friend and confidant of the movie star. Manian, who has advised Rajinikanth on political matters for years, tells Open that this was the first time he had heard of Murthy. A businessman, Murthy was reported to have served as a former Union minister and DMK leader Murasoli Maran’s assistant—a claim now refuted by his son, Lok Sabha MP Dayanidhi Maran. While sources in DMK reveal he is distantly related to the party’s first family—his daughter was married to a cousin of Stalin’s son-in-law—it is clear that Murthy is a man both BJP and DMK are eager to wash their hands of. “He is a man capable of spinning fantastic tales for hours on end,” says a DMK leader. “I wouldn’t be surprised if he was instrumental in sweet-talking Rajinikanth into entering the poll fray—something BJP and his advisors had failed to do.”


So what’s in it for Rajinikanth? “One thing I can say clearly. We will have no truck with AIADMK or DMK. Rajinikanth believes that the system has to be changed. And it degenerated because of these parties,” says Manian. Su Thirunavukkarasar, the Congress MP from Tiruchirappalli and a friend of Rajinikanth’s, says that rather than political pressure from BJP or a desire to leave behind a legacy beyond his films, the superstar seems to have acted on “a compulsion to stay true to his word”. “He promised his fans he would come, and now he has. It is certainly a risk, but then, he has nothing to lose and everything to gain.” Right off the bat, Thirunavukkarasar, who made his political debut in AIADMK’s maiden Assembly election in 1977, winning the Aranthangi seat, rules out a comparison with MGR. “While MGR believed in his mass appeal, it was incredibly brave of him to break away from DMK in 1972, just a year after M Karunanidhi had proved his mettle as the next big Dravidian leader and heir to CN Annadurai’s legacy. Barely 15 MLAs out of 200-plus stood by MGR. Not a single district president of DMK joined him. He built the party from scratch, with a small but resourceful team of people including organisers like RM Veerappan and SD Somasundaram and Nanjil Manoharan who was an orator. With Kamal Haasan and Rajinikanth, they may be able to attract cadres from other parties easily, but I feel that they run the risk of being self-referential. There are no big leaders in their camps telling people what they bring to the table,” Thirunavukkarasar says. Even gods need their prophets and moralists, and Rajinikanth cannot rely on his filmography alone to act as teacher, storyteller and propagandist.

More importantly, is the superstar willing to play a cameo in someone else’s hit? Having said that he wouldn’t enter politics to play the spoiler’s role, he finds himself in a multi-cornered contest featuring Stalin, Palanisamy, Seeman of the Naam Thamilar Katchi, Kamal Haasan and others. Pundits venture that he may capture a little of everyone’s vote share and end up a lodestar for lost souls. “At a time when Tamil society has been depoliticised and younger voters aren’t committed to a party, there are bound to be neck-and-neck fights in certain constituencies, and this is where Rajinikanth could weaken both AIADMK and DMK,” says Manushyaputhiran, a Dravidian intellectual and DMK spokesperson. If DMK has not formally reacted to Rajinikanth’s foray into politics, it is because they don’t consider him a threat, he says. “Change is the one thing he keeps talking about. Even if you say that a section of society is tired of traditional parties, how can one individual change it? Will people buy into such a theory?” 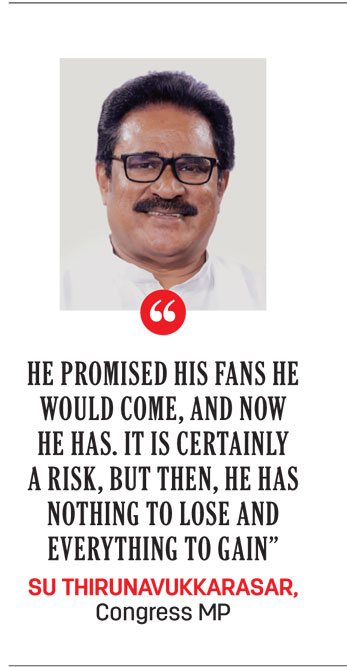 WHILE AIADMK AND DMK each have a core votebank, attempts to get fence-sitters to back a third front have largely failed. Actor Vijaykanth’s Desiya Murpokku Dravida Kazhagam (DMDK) had garnered 8.38 per cent of the total votes polled in his 2006 debut election, but went on to ally with AIADMK in the 2011 elections. In the 2016 Assembly polls—the last time Karunanidhi and Jayalalithaa led their respective parties—DMDK stitched together an alliance with the Left parties and Vaiko’s Marumalarchi Dravida Munnetra Kazhagam (MDMK), and saw its vote share dip to 2.4 per cent. In fact, the one big takeaway from the 2016 elections was that the two Dravidian majors had gained in strength from 2011 to 2016—AIADMK from 38.4 per cent to 40.8 per cent and DMK (and allies) from 22.4 per cent to 39.7 per cent (41.05 per cent in the 176 seats it contested)—and the smaller parties weakened. In subsequent polls in the state, even without Karunanidhi and Jayalalithaa leading the charge, DMK scored a resounding win, netting 38 of 39 parliamentary seats in the 2019 General Election, and AIADMK, which went solo in the by-elections to 22 Assembly constituencies, managed to win nine. Is the argument for a third force then a moot point? 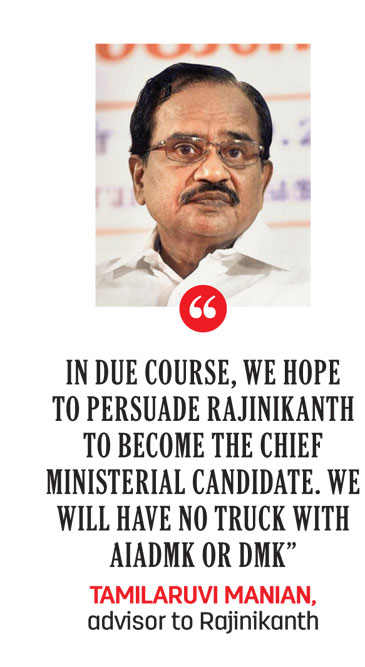 “Rajinikanth’s real strength is that he doesn’t hide anything from the public. His strengths and weaknesses are on full display,” says Manian. The star’s health (the reason he is said to have waited out the pandemic to launch his party), his commitment to spirituality, his admiration for Prime Minister Narendra Modi—and for LK Advani before him—have made him an easy target. “He is not perturbed. He refers to Mahatma Gandhi’s concept of spiritual politics—respecting all religions and doing no wrong—and practises the teachings of the Gita, which advocates detachment. He believes he should do everything he can to bring change, while harbouring no expectations,” Manian says.

AIADMK has extended a friendly hand to Rajinikanth, but he would have to stand alone to project himself as an alternative to the knaves, traitors and profiteers who populate the political ranks in Tamil Nadu. He must also exercise extreme caution with BJP, which is seen as a force of regress by a majority of Tamils, especially given his statements in favour of the Centre’s decisions in the past— be it the revocation of Jammu & Kashmir’s special status or the passing of the Citizenship (Amendment) Act. It is no secret that within AIADMK, which will face the elections in alliance with BJP, the latter’s nationalist policies are a constant background anxiety. “National parties that have found they cannot penetrate Tamil Nadu have neglected the state’s development, and we have prospered despite that,” says C Ponnaiyan, a senior AIADMK leader. “BJP, unless they change their policies, cannot take root in Tamil Nadu overnight. This is the understanding under which we are in alliance with them. One cannot expect a cinestar to understand the nuances of such a relationship.” Rajinikanth’s cardinal virtue is his ability to connect with the masses. To achieve a reasonable measure of success in a high-stakes election that will determine the future of both the major Dravidian parties, he must in all honesty grasp the Tamil mind, with all its thorny issues, instead of trying to be a catch-all.