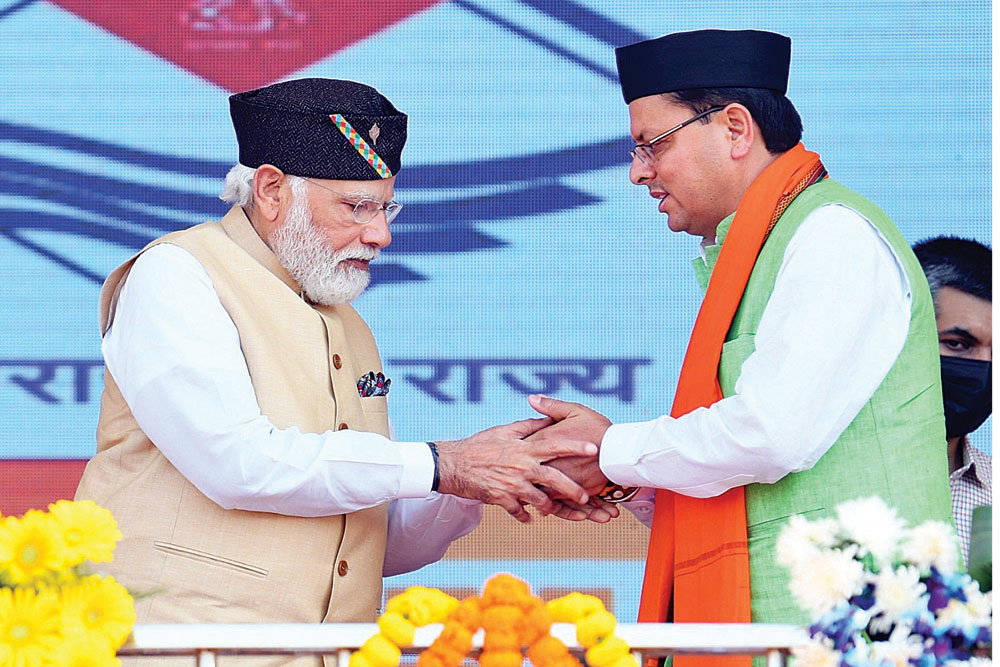 
WHEN SHAYARA BANO opened the newspaper on the morning of March 25 at her parents’ home near Kashipur in Uttarakhand, she was in for a pleasant surprise. On the front page was a story that the Pushkar Singh Dhami government was setting up a panel of experts to draft the framework of a uniform civil code (UCC) that would negate religion-specific personal laws in the state. Her mind raced down memory lane—being abandoned by her husband, the talaq nama that came by Speed Post from Allahabad, the fight against triple talaq.

Nearly six years later, Bano, 42, is dealing with stories of Muslim women similar to hers, as vice chairperson in the state women’s commission with minister of state (MoS) status, a position given to her after she joined the Bharatiya Janata Party (BJP) in 2020. “Though there is a law now against triple talaq, it has still not entirely sunk in. A uniform civil code will ensure gender justice and free women from practices under personal law that have come in the way of the emancipation of Muslim women,” she says. It was after her petition challenging instantaneous triple talaq (talaq-e-bidat), a Muslim personal law practice based on Sharia, and arguing that it violated the principle of equal rights for women, that the Supreme Court declared the practice unconstitutional and directed Parliament to take legislative measures against triple talaq. Her petition in the court, challenging instant triple talaq, polygamy, and halala (a practice whereby divorced women have to consummate a second marriage in case they want to go back to their husbands), made no mention of a UCC. She, however, did not return to her husband and continued to stay in her father’s house in Kashipur, even after triple talaq was struck down.

Bano, who no longer wears a hijab, a custom she followed in her husband’s home, is in tune with her party’s views on uniformity in personal laws and the Karnataka hijab row. “If there is a uniform it should be followed. Inside a class there has to be uniformity and you cannot sit wearing the hijab.” As the heat over the hijab controversy raged in Karnataka in February, about 2,200 kilometres north, an icy political battle was going on between Congress and BJP in Uttarakhand. Just hours before campaigning was to end for the February 14 Assembly election, Chief Minister Pushkar Singh Dhami, reading out from sheets of paper before a television camera on his home turf of Khatima, promised that if his government returned to power, steps would be taken to bring in a UCC to provide the same laws on “marriages, divorce, land-property and inheritance for all people, irrespective of their faith.”


He went on to say that it would ensure social harmony, gender justice, empowerment and protect the cultural-spiritual heritage of “Devbhumi (the land of God)”, a name the state acquired owing to its Hindu pilgrimage centres. The announcement to bring in a UCC in the small hill state came as a surprise, even for state BJP leaders. Congress, meanwhile, was painstakingly denying charges that former Chief Minister Harish Rawat, who was leading the party’s campaign, had promised a Muslim university to be set up in the state. According to BJP leaders, Congress was playing both cards—soft Hindutva and Muslim appeasement. After Congress’ unprecedented defeat in a consecutive election in Uttarakhand, Rawat said the Muslim appeasement charge by BJP had hurt his party in the election.

When Dhami returned as chief minister, with his party getting a comfortable majority in the Assembly, his last-minute pre-poll promise on the UCC was one of the first issues his newly formed cabinet set the ball rolling on. He also expressed the hope that other states would follow Uttarakhand. The Udupi hijab debate was already sparking off murmurs about the need for a UCC, particularly among those who opposed wearing the hijab at school, reopening old wounds and touching raw nerves in Congress. The UCC debate had found resonance during the 1985 Shah Bano case which was seen as an unmistakable illustration of Congress succumbing to its perceived need for Muslim appeasement. Unlike in the Shayara Bano case which ended up with Parliament outlawing triple talaq, for Shah Bano, a divorced woman in her seventies who had approached the court seeking maintenance from her husband, the Rajiv Gandhi government brought in the Muslim Women (Protection of Rights on Divorce) Act, 1986, diluting the Supreme Court’s ruling that Shah Bano be given maintenance money.

With BJP in power at the Centre, the Uttarakhand government is likely to face few hurdles. Politically, Dhami is in line with his party’s core agenda and constitutional boundaries

The court, which had invoked Section 125 of the Code of Criminal Procedure (CrPC) that applied uniformly to everyone, had also raised the need for bringing in a UCC which had been on the back burner ever since the Constituent Assembly in 1948, after debating the issue at length, had voted in favour of incorporating it in the Constitution. Article 35 of the draft Constitution was added as part of the Directive Principles of State Policy in Part IV of the Constitution as Article 44, laying down that the state shall endeavour to secure for the citizens a uniform civil code throughout the territory of India. Being under the Directive Principles, it is not enforceable in court. The Shah Bano case had also exposed the conflicts between a UCC, ensuring equality in personal laws, and Article 25, the right to religious freedom. BR Ambedkar, who had argued in favour of a UCC in the Constituent Assembly in November 1948, had said in his speech, “no one need be apprehensive that if the State has the power, the State will immediately proceed to execute… that power in a manner may be found to be objectionable by the Muslims or by the Christians or by any other community. I think it would be a mad government if it did so.”

It is interesting that the first state to test the waters on the contentious issue is Uttarakhand where, unlike neighbouring Uttar Pradesh (UP), identity politics has not held much sway over elections. It was rather unforeseen. According to state BJP sources, there has been a growing concern about the changing demography over the past two decades with the Muslim population rising in the state which shares its borders with western UP, a region with a high concentration of the minority population. A UCC, which would ban polygamy allowed under Muslim personal law, is seen as a way to contain the growing population, they say. Uttarakhand is one of the four states with a population of one crore or more where the Muslim demographic increased by around two points between 2001 and 2011. In Census 2011, the state’s Muslim population was estimated to be nearly 14 per cent. The other three are Assam, West Bengal and Kerala. Of these, BJP is in power only in Assam where the Muslim population is 34.22 per cent.

A UCC IS NEITHER a new agenda for BJP nor is Dhami stepping outside constitutional boundaries by initiating steps to introduce it in Uttarakhand. The matter being on the Concurrent List, under which both the Centre and the states can make laws, the state government would be within its jurisdiction in implementing it, as long as it was not at variance with a Central law. It would, however, mean delving into the delicate task of drafting a Bill bringing in a uniform civil law for everyone while all religion-based personal civil laws, in practice across the country, cease to exist in the state. With BJP in power at the Centre, the Uttarakhand government is likely to face fewer hurdles in the passage of its proposed legislation. Politically, Dhami is in line with his party’s core agenda as the UCC has been one of BJP’s promises in its manifestos over the years: “BJP believes that there cannot be gender equality till such time India adopts a Uniform Civil Code, which protects the rights of all women, and the BJP reiterates its stand to draft a Uniform Civil Code, drawing upon the best traditions and harmonising them with the modern times.”

Dhami’s pre-poll announcement was apparently no shot in the dark. His new cabinet’s immediate move to form a committee to look into the UCC underscored it. BJP leaders welcomed the state government’s stance. “It’s high time we moved ahead in the direction of a uniform civil code which is good for a country like India, and if a state is initiating such a step, it’s most welcome. It is our constitutional duty. The makers of our Constitution had agreed on it nearly 75 years ago. This should be debated and a possible national consensus evolved,” says Union Minister of Minority Affairs Mukhtar Abbas Naqvi.

Congress, reeling from its debacles in the recent elections, appears to be treading cautiously in reacting to the Dhami government’s move. In Uttarakhand, which has always voted for alternate governments, Congress failed to take advantage of the anti-incumbency and change of BJP’s chief ministers. In Rawat’s acknowledgement that BJP’s ‘Muslim appeasement’ charge against Congress was one of the major factors that led to his party’s rout, lies Congress’ realisation that polarising a vote bank along religious lines, or even being accused of it, would hand an advantage to BJP.

After Congress’ defeat in a consecutive election in Uttarakhand, Harish Rawat said the Muslim appeasement charge by BJP had hurt his party. Congress, thus, appears to be treading cautiously now

“The BJP, desperate towards the end, made a promise with an aim to polarise voters. After it has won, it is keeping that promise. But there are other more immediate concerns in the state like migration, infrastructure, health and education,” says Congress leader Prakash Joshi, who was chairperson of the party’s election management committee for Uttarakhand.

In February, about a week before Dhami promised to bring a UCC to Uttarakhand, BJP MP Nishikant Dubey had raised the UCC issue during zero hour in Lok Sabha, asking the Centre to expedite the process. In response, Union Law Minister Kiren Rijiju had said that in view of the importance of the subject, the sensitivity involved and the fact that it requires an in-depth study of the provisions of various personal laws governing different communities, it was referred to the Law Commission. The 21st Law Commission’s term ended in August 2018. Rijiju said it may be taken up by the 22nd Law Commission.

Till the Centre makes its next move, all eyes will be on Uttarakhand. If the state brings in a UCC, it will be the first to do so. Goa is known to have a uniform civil code, but it is the Portuguese Civil Code, 1867, which has specific provisions for certain communities. What remains to be seen is if Uttarakhand galvanises other states to come up with their own drafts on a UCC. “If every state brings in its own legislation and the Centre comes up with its own, there could be chaos with conflicting laws. As far as Uttarakhand is concerned, till it comes up with a draft Bill, it is wishful thinking and political posturing,” says Supreme Court lawyer Sanjay Hegde.

Senior advocate Vikas Singh says there is nothing wrong in a state introducing a UCC as long as it is done after thorough consultation. “A state amendment will apply to the state. However, consensus has to be built on several issues, particularly those concerning women’s rights and marriage age.”

The debate over the uniform civil code is going to be a long one. Whether Uttarakhand succeeds in its plans or not and whether other states follow in its footsteps or not, this is just the tip of the iceberg.