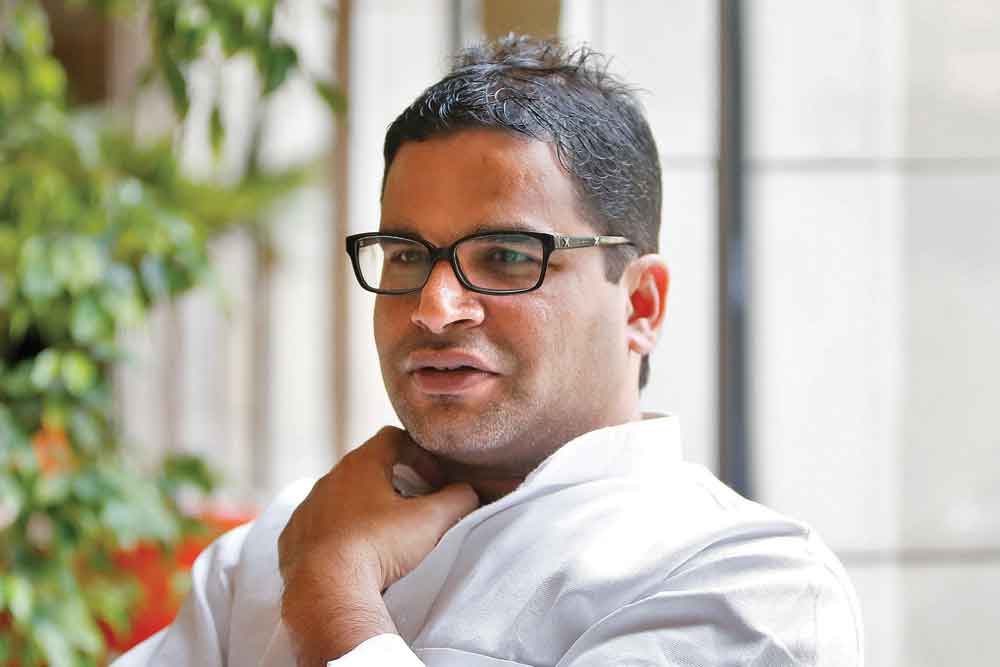 
MEMBERS OF PRASHANT Kishor’s team describe his style of working in three words—detail, data and doggedness. And, in this he has been consistent on every side of the political aisle, from when he was part of Team Modi in Gujarat to being West Bengal Chief Minister Mamata Banerjee’s poll strategist to defeat BJP. He moved from one political camp to another, working with leaders on his terms, a rollercoaster ride, rising to a crescendo in West Bengal.

Kishor works with leaders, not just their parties. He started with Narendra Modi in the 2014 General Election and then went on to manage campaigns for leaders who fought against Modi. His ambitions were beyond being a mere political strategist. After Modi became prime minister, he was denied a bigger role in governance. It was during that time that JD (U) leader Pavan K Varma introduced him to Nitish Kumar, who had strained relations with Modi. Kishor formed his new company I-PAC, a political consultancy, through which he offered his services to the JD(U) in Bihar. He stayed at the chief minister’s house and had a say in his campaign style, party slogans, manifesto and candidates. The JD (U)-RJD alliance defeated BJP, just a year after Modi had swept the Lok Sabha elections. Kishor’s aspirations rose to being a politician himself, just as his attire changed from jeans and T-shirts to white kurta and pyjamas. Three years later, he joined JD(U) and was appointed the party’s vice president, but in January 2020 the relationship ended after a bitter public showdown over Kumar’s support to the Citizenship (Amendment) Act (CAA) and National Register of Citizens (NRC). Kishor was sacked
from the party for ‘indiscipline’.

But he always had a next move planned. In the three years after 2015, besides Uttar Pradesh which he lost, he was part of the Congress campaign in Punjab. He made Punjab Chief Minister Amarinder Singh wake up early to leave for campaigning. When he took up working for Jaganmohan Reddy in Andhra Pradesh in 2019, he was negotiating with Arvind Kejriwal’s Aam Aadmi Party (AAP) for the 2020 elections. He convinced Reddy, a greenhorn in politics then, to launch a statewide yatra. When he was hired by DMK to take on AIADMK, of which BJP is an ally in Tamil Nadu, he had his eyes set on Mamata Banerjee’s Trinamool Congress (TMC). DMK, criticised for hiring a Brahmin from Bihar to manage its campaign, won, but not with the margins it had anticipated. In West Bengal, however, his prediction in December that BJP will find it difficult to cross double figures, turned out to be correct.
A senior TMC leader says though Kishor worked mostly with Abhishek Banerjee, the chief minister’s nephew, Mamata Banerjee also listened to his advice. Kishor started by meeting all party MPs, followed by MLAs. Working from the office set up in Kolkata’s Salt Lake, his young I-PAC team members fanned out across the state to give feedback to him. A member who worked with him for four years recalls that, in the 15 months that Kishor was in West Bengal, he was always on his toes, data crunching and using it scientifically in the campaign. With an eye for detail, he would himself decide what questions were to be asked in surveys. He would hold five-six hour conferences with his team, looking at every angle. “What I learnt from him was not to assume anything,” says the former I-PAC employee.

Another I-PAC member, who has worked with Kishor in Andhra Pradesh, describes him as a “super computer” who stores everything from voting patterns to caste dynamics. After Bihar in 2015 and Delhi in 2020, this is the third time that the party for which he was election strategist has defeated BJP in a direct face-off. Kishor had tweeted in December that if BJP got beyond double figures, he should “quit this space”. BJP ended up with 77 seats. Yet, Kishor has announced that he wants to take a break from what he is doing. He calls himself a failed politician. Kishor was 33 when he quit as a public health professional and joined Team Modi. Those who have known him say being a poll strategist is in his blood, refusing to believe that he would quit it altogether.