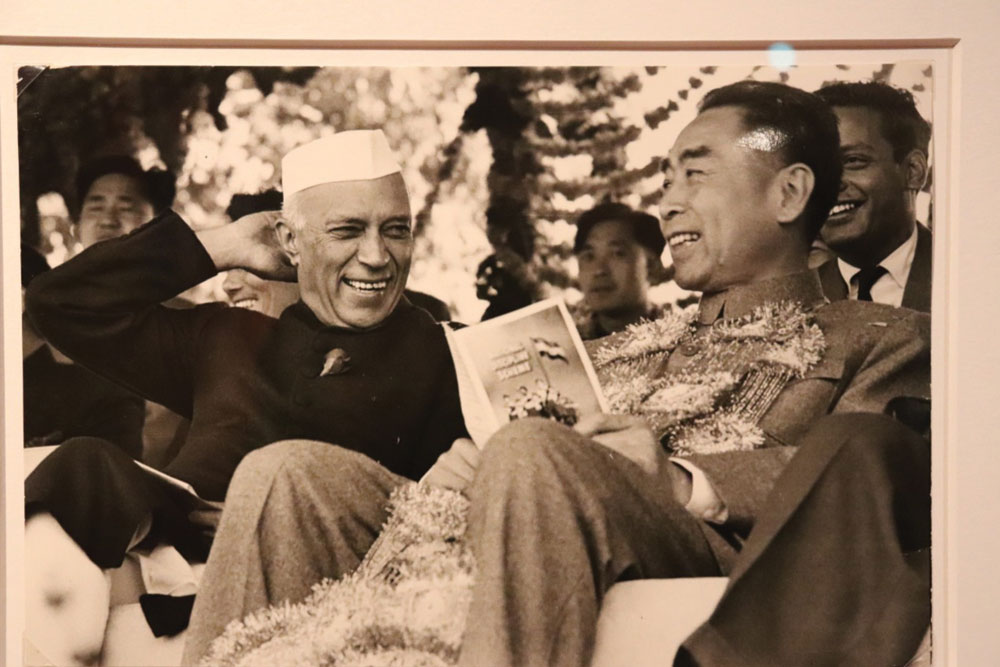 
BLACK-AND-WHITE photo­graphs of Indian courtesans in the late 19th century, Prime Minister Jawaharlal Nehru and the Chinese premier Zhou Enlai sharing a laugh in Delhi in 1956, refugees at railway stations, and Satyajit Ray—these images of the ordinary and the famous make up the exhibition Convergence: A Panorama of Photography’s French Connections in India, mounted at Delhi’s Kiran Nadar’s Museum of Art. The exhibition showcases the work of both French and Indian photographers from the 1850s to the 1980s and their perspectives on the tumultuous and triumphant events of over a century. Rahaab Allana, the exhibition’s curator says, “The aim of the exhibition was to give a sense of the past that doesn’t have one single fixable narrative; history can also be considered through the participa­tion of anonymous and unknown practitioners.”

Since its inception, photography has been considered as the clearest, most accurate record of people and places. Yet depictions also depend on the lens, angle and the intentions of the person holding the camera and this becomes evident when different perspectives are brought together. India and Indi­ans, portrayed through the lens of an “outsider”, risks conveying a sense of the alien and exotic, even if portrayed with compassion (the images of the famines, in particular), or with a matter-of-fact precision. However, the purpose behind these older photographs, irrespective of the period, photographer or subject, was nearly always the same. “This was part of the colonial mission; documenta­tion, inventory making, indexing,” says Allana. Even post-Independence, when the intent behind European photog­raphers’ gaze changed, it may seem to some observers that India remained the eternal ‘other’.

Convergence is a part of the Bonjour India initiative, a cultural and educational effort by the Embassy of France, the Al­liance Française network, and other French organisa­tions working in India. The photographs are sourced from a selection of prints and negatives from French institutions (such as Musée Nicéphore Niépce Mu­seum and Musée Goupil – Ville de Bordeaux), and are on view for the first time in India. The originals are showcased in KNMA while reproductions were on display in Chennai, Ahmedabad and Bengaluru. The planning behind this collection took around 18 months and was a collaborative effort, notably between curators Rahaab Allana, Chris­tine Barthe, and Laurence Madeline, head of the photography collection, Guimet Museum, Paris.

The photographs present both the everyday and historic moments of the past. As Allana tells Open, “I wanted to explore the dimensions of cultural history through photography that give us a transnational sense of the past, and ways in which images were taken and exchanged from both the 19th and 20th centuries.” Madeline elaborates, “The photos Rahaab chose not only reveal an early and strong activity in the matter of photography in India, but it opens new fields of reflections about both gazes. The word ‘Convergences’ shows the way India and France, through photography, can meet.” She adds, “Photography is an important field and the understanding of this media has changed a lot these last few years. So, 2022 was a good moment for this show.”


The selection of photographs lin­ing the dark red-and-white walls of KNMA’s cool interior leave the viewer with an elegant and stark impression. “We wanted to focus on the sense of the classic, dark-room photography,” says Allana. Enhancing the sense of period are displays of early vintage cameras, albums and prints, showing India’s history through artefacts as well. Two photographers featured prominently include Louis Rousselet, who was in India in the mid-19th century, and Marc Riboud, a French photojournalist in the 1950s, on whom a large part of the exhibition is centred. Other works displayed include those by Denis Brihat and Henri Cartier-Bresson.

Broadly chronological, dramatic events are juxtaposed alongside images of the commonplace and this, Allana emphasises during the curatorial walk­through, is critical to the understand­ing of the basic theme of the exhibition “It is as important for us to acknowledge non-iconic imagery.” It is only through a combination—or convergence—of both that the great upheavals of the 19th and 20th centuries can be under­stood. Allana also points out, as it has been 75 years since Independence, a look back at pictures of the past was significant. The central figure of the exhibition, Riboud, came to India in 1956, a time of great post-Independence transition and his photographs are what Allana calls the “fulcrum and anchor” of the exhibition. At least 60 of Riboud’s photographs are on display, and his route across Asia is promi­nently displayed on a wall. Riboud came at a time of hope in India. The achievement of Indepen­dence was still recent and the future seemed full of potential. At the same time, the transition had many devastating effects. Riboud captured this contradiction in his works, which is why so much of Convergence fo­cused on his efforts. This sensibility informs his images, whether they are of people thronging the ghats of the Ganga, or scenes from the Bangladesh war, or the peaceful groves of Santiniketan.

Viewers will get to see other rare images, such as the first photograph ever shot: Joseph Nicéphore Niépce’s sepia-toned, View From the Window at Le Gras, taken in 1826. Thus, this year marks 195 years since this first photograph, which is another reason for Convergence being held now.

More importantly, the displays depict interactions between Indian and French photographers in India. Naturally, the photographs of Raja Lala Deen Dayal feature prominently as he was the Hyderabad court photographer, who at times worked alongside French photographers in India. Louis Rousse­let’s photographs of the sites and people of the central Indian provinces are also on display, as are his photographs with Maharaja Sawai Ram Singh II, the first photographer king of Jaipur. These self-portraits, (or “selfies” in Allana’s words), were shot with the help of an assistant taking the lens and models standing in front of the camera, in a pre-decided fashion. Rousselet went on to have a long association with the maharaja, which comes across in his book India and Its Native Princes (1876). French surgeon-turned-photographer Jean-Baptiste Os­car Mallitte also captured a certain idea of India. His photographs show images of the pre-industrial, rustic life of ordi­nary Indians, notably one showing men making a wooden wheel. The original album of his works is also on display. 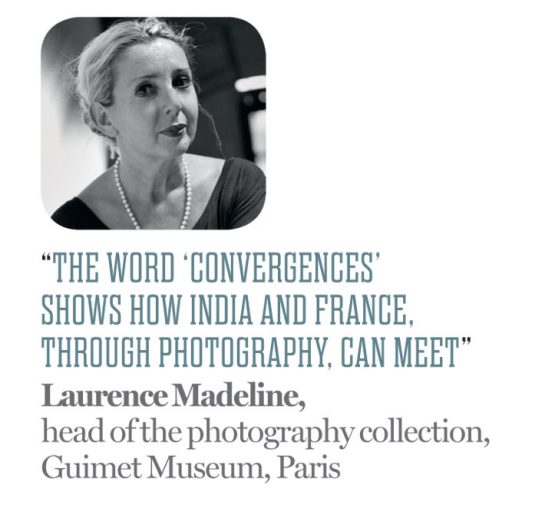 Significant developments in India through the late 1800s to 1900s—in­cluding early indigo farming and the effects of famines in states such as Madras—were also extensively docu­mented by French photographers, as were images of local arts and crafts and local tribes. Major events of the early to mid-20th century are also displayed. Hitherto less-known photographs of famed Bharatanatyam dancer Rukmini Devi Arundale and her husband, and an album where the Desh Sevikas are portrayed, capture eye-catching mo­ments. Photographs taken by Homai Vyarawalla, India’s first woman photo­journalist, such as one of nurses drilling in Bombay during WWII, simultane­ously record two largely forgotten facts—there were active Indian women photojournalists and Indian women participated in the war effort. 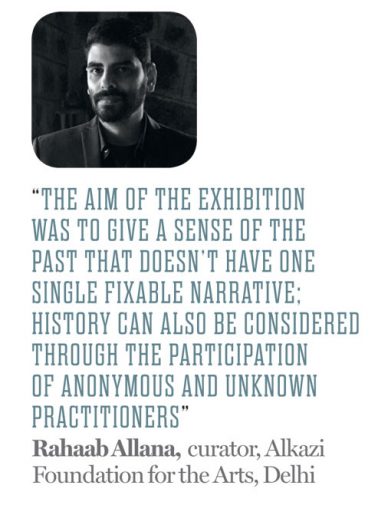 The exhibition’s timeline ends in the 1980s, before the rise of digital photogra­phy, and during the heyday of newspaper and magazine photojournalism. Con­vergence’s focus on both historic events and personalities as well as the hidden moments of joy and tragedy in everyday life, makes for an important record of our past. A unique feature of Convergence is that it also includes many photographs by “unknown” photographers, and so this exhibition can also be seen as a tribute to them for recording history in remarkable ways. n

(Convergence: A Panorama of Photography’s French Connections in India runs at Kiran Nadar Museum of Art, Saket, Delhi till June 30)