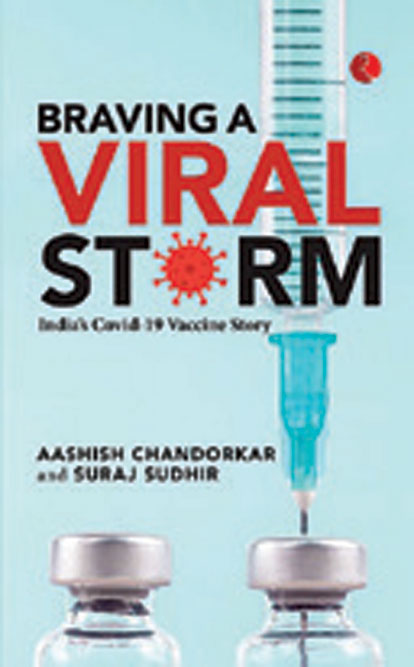 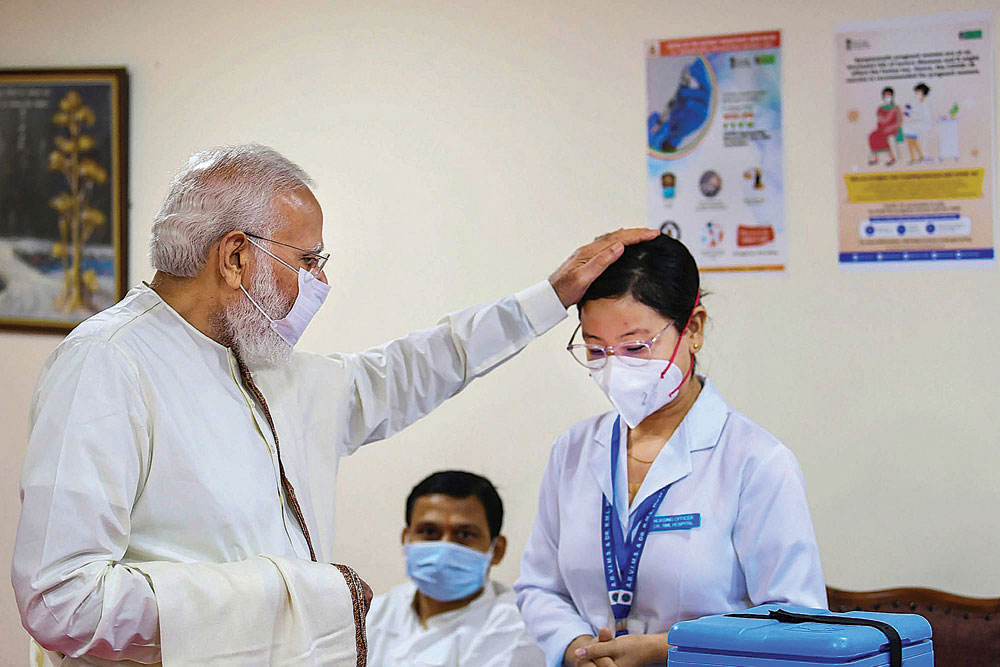 
THROUGH THE VARIOUS review meetings in 2020, Prime Minister Narendra Modi continued to emphasize that the vaccination programme had to be technology-enabled. On the supply side, the use of the eVIN was finalized through the second half of the year. Since this platform was already available for the existing immunization programmes, it was a natural choice for managing the supply and tracking of Covid-19 vaccines.

On 30 May 2020, PM Modi invited Ram Sewak Sharma, then chairman of the Telecom Regulatory Authority of India, for a meeting. This meeting was to discuss using technology for the smooth running of the vaccination process in the country. At this stage, there were no vaccines and no plan for a national vaccination drive. But the government was cognizant of challenges that a nationwide vaccination drive would face in execution. There was also a keen belief that the use of technology could potentially help in this massive nationwide exercise.

Sharma, who had headed the Unique Identification Authority of India (UIDAI), the body that drove the issuance and adoption of Aadhaar, made a presentation to the PM. This presentation emphasized why an Aadhaar-linked record of vaccination was important to be maintained.

However, the question of a citizen-facing front-end platform remained open. The prevalent thought was that the eVIN could be repurposed as a front-end application, too. But the challenge of implementing such a system was non-trivial in nature. It was obvious that if a digital platform was to be used for bookings, confirmation and verification of vaccine doses, it would have to be hugely scalable, given the Indian population base.

This citizen-facing platform was to be called CoWIN. The government sought the help of India’s vibrant technology sector and startups to scale-up the platform and make it ready for nationwide use. This effort was over and above the work already being done within the government. These efforts did not fully result in a system that could support a nationwide programme.

Since the first set of vaccine recipients was a controlled set of healthcare workers and frontline workers, the health ministry believed that repurposing the eVIN could work. The target population in this cohort was about 3 crore. There was a growing realization that as the total number of potential vaccine recipients increased, the system requirements would also become onerous.

CoWIN was tested on 28 and 29 December 2020 at five sites each in the states of Andhra Pradesh, Assam, Gujarat and Punjab for readiness and to get user feedback. Subsequently, on 4 January 2021, the platform was tested in 125 districts around the country with 286 mock vaccination sessions created and managed through the platform. On 8 January 2021, a week before the launch, CoWIN was tested in more than 700 districts around the country to ensure healthcare workers and public health officials were familiar with it.

Meanwhile, PM Modi continued to emphasize in his regular review meetings that the success of the digital platform was a must. India would not be adopting any paper-based process at any point of time, so the digital platform had to scale-up elegantly. The PM raised issues like the international recognition of certificates and emphasized that India had to be prepared in the best possible manner still required and he was expecting the PM to be unhappy with the assessment.

PM Modi, instead, instructed Sharma to ensure that the digital platform was fully scaled by the time the second dose was administered to the healthcare and frontline workers. In effect, there was a month to ensure that the technology held up.

THE VISION THAT PM Modi put forward for the technology had four guiding principles. First, technology had to ensure that the vaccination process was equitable and inclusive across multilingual states, where multiple modes for registration to ensure accessibility for all should be possible. Second, India needed a single source of truth that could be used for unbiased distribution of vaccine information through a single source of data to remove information asymmetry and align all stakeholders. Third, the application should have a dynamic architecture, capable of evolving and accommodating changes as per the circumstances, and built for a scale of a billion-plus citizens. Fourth, data on vaccination and recording of adverse events should help in the formulation of data-driven public health policy and help in evaluating the efficacy of different vaccines.

On 16 January 2021, India launched the vaccination programme on CoWIN. From day one, the entire process was digitized. Sharma’s five-member team continued to work on the application. They took the fundamental view that no single website may be able to handle the volume of concurrent users accessing the system from around the country. Hence, they worked on creating a robust back- end platform while taking the approach of publishing application programming interfaces (APIs) to ensure that various front-end applications could connect to the platform for specific functions. The robustness of the back-end became the primary consideration for Sharma’s team. They put lessons from the Aadhaar platform development to good use. The CoWIN platform was developed with a classic three-layer architecture.

The CoWIN portal, which the users used for viewing available slots and booking, formed the front end. The CoWIN dashboard, which was published for public viewing and near-real-time tracking of vaccination processes, was designed as the information front end.

This technology architecture promoted the use of APIs. Third-party applications could use these interfaces to interact with specific modules and help users undertake a task related to that module.

Finally, the certification application programming interfaces allowed portals like corporate building management systems or travel portals to access vaccination certificates based on a reference identification or a registered mobile number to validate vaccination status of individuals.

These functions of CoWIN were seen and used by all Indian citizens who opted for vaccination. The functionalities for the vaccinators and the public health officials of all districts also tied in seamlessly.

CoWIN was going to get significantly more traffic than Aadhaar systems, given its in-built necessity of concurrency. Every platform usage experience had to be good, or else people would quickly lose trust in the technology.

This problem was further compounded by the fact that not all Indians would be able to use the technology with equal facility.

The system was designed to work with Aadhaar as the central reference number, as has been the case for all of India’s public digital infrastructure. Every user could register with a mobile phone and Aadhaar reference, which would then record both doses against the mentioned Aadhaar number. Since Aadhaar use was not mandatory, the system also had the provision for users to register with other identity numbers. Nonetheless, unique identification of the user was a key feature of the system and the central tenet on which it was designed.

Sensing that the technological backbone would need further robustness, Prime Minister Modi decided to revive the team that had delivered Aadhaar. He called Ram Sewak Sharma. He stressed the technology imperatives for a successful vaccination process and asked Sharma to join the team of experts

While a lot of CoWIN features sounded perfectly logical, and, in hindsight, even simplistic, the importance of a technology-validated, no-manual-intervention system was not fully appreciated until late into the vaccination process. As is often the case, contrasting experience helps in appreciating the true value of what’s commonplace.

By August 2021, there was a flourishing black market in the US for manual vaccination cards, which were being used throughout the country. It was only in February 2022 when the US FDA warned that vaccine forgeries were a problem to be aware of. Not just fake vaccine certificates, the US had an even bigger logistical issue when it came to tracking vaccinations.

And this was not just the US. Even smaller and significantly richer countries, like Switzerland, had problems. In December 2021, an inquiry was launched when the local authorities discovered around 8,000 fake vaccination cards in the eastern canton of St Gallen.

These situations further elaborated the importance of CoWIN. Since the international recognition of vaccine certificates was integral for the post-pandemic world, India had to set a high bar, unfortunately higher than what other countries could get away with, of demonstrating a robust process.

This is not to say that CoWIN did not have problems. It was natural that a system of this scale and magnitude went through an initial phase of turbulence.

During the worst of the second wave of the pandemic in April and May 2021, vaccine enthusiasm also started to peak. This led to a rush for vaccines at a time when the supply was gradually ramping up.

The blame for this rather complex situation fell on CoWIN. A multivariate problem was oversimplified to a narrative that CoWIN does not work.

This narrative took even deeper roots when the Central government decided to let states procure their own vaccines in April. However, coinciding with these couple of months, CoWIN became a deeper collateral casualty. The states also requested the central government to allow state-specific technology apps and not just rely on CoWIN.
India’s Covid-19 response was constantly under the gaze of international media. The functioning of the CoWIN platform was no different.

However, despite the internal and the external pressure to stop using CoWIN or at least limiting its use, the Central government stood firm. It was evident that the platform was not to be crucified for the evolving nature of the vaccination ecosystem.

If states would have created their own apps, there could have been additional problems in terms of synchronizing data with CoWIN and potential problems of mutual recognition of state apps within the country itself.

However, with states unable to procure vaccines on their own—which was hardly surprising, as no company had extra stocks of vaccine—the debate over app proliferation also died down. Eventually, the push in the media against CoWIN, too, vanished. In hindsight, while health is a state subject, having a centralized tracking and monitoring platform like CoWIN worked best for the Indian vaccination programme.

While CoWIN was not competing for any commercial recognition, a contrast with how the Big Tech platforms have grown is instructive. CoWIN effectively became the fastest tech platform globally to amass 200 million registrations in less than four months. Typically, a globally successful Big Tech-led social media platform would take a year to hit 100 million users.

The CoWIN platform routinely handled more than a billion visits daily at the peak of the vaccination process. The highest number of hits recorded in a day were 310 crore or 3.1 billion across all categories of users. The platform handled 1.37 crore or 13.7 million registrations within eight hours of the vaccination process opening for those in the age bracket of 18-44.

On 17 September 2021, on the PM’s birthday, almost 2.5 crore or 25 million vaccine doses were administered in a single day. This number was more than the entire population of all but
54 countries in the world.

By the end of the year 2021, India administered 145 crore vaccine doses. Each of them was recorded on CoWIN. Each of them could be verified using CoWIN functionality for scanning Quick Response or QR codes on the certificates. Indian ingenuity worked, authoritatively so. The digital-first and mobile-first
approach India adopted was handsomely vindicated.

CoWIN was a winner and the platform ensured that India’s vaccination process remained scientific, evidence-based and with real-time control.

(This is an edited excerpt from Braving a Viral Storm: India’s Covid-19 Vaccine Story by Aashish Chandorkar and Suraj Sudhir)

Suraj Sudhir
Suraj Sudhir is a technology professional based in California