Meghan and the Ghost of Diana

Meghan, as she says during the interview, was a waitress and an actress, had been working since the age of 13, had always been independent, and had Harry to lean on 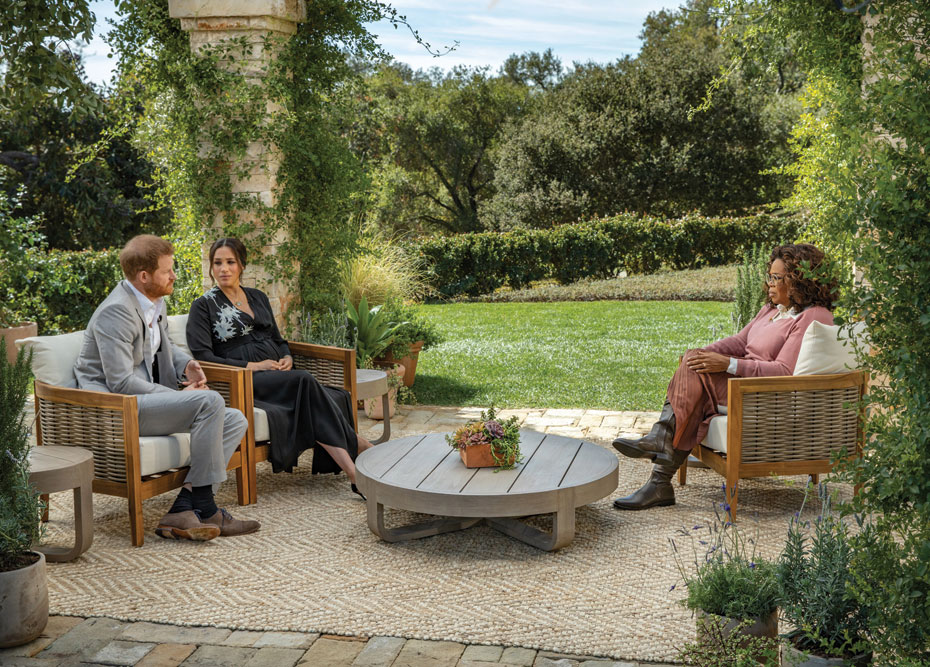 
IN MIKE BARTLETT’S stage play King Charles III, adapted into a TV movie in 2017, Harry Windsor is portrayed as a fun-loving singleton who unthinkingly indulges in planes, palaces and trips to Las Vegas that the British public pays for. That is until he is saved by the love of a Black woman, who makes him want to give it all up, not be top of the heap in unearned privilege any longer. That is until the end, when his father abdicates, Prince William becomes king and asks him to honour the commitment to each other their mother Diana made them undertake.

Fiction couldn’t be closer or farther from the truth. Harry met Meghan Markle, the biracial actress made famous by the TV weekly soap Suits, in 2016. But unlike the fictional Harry, he has broken free of what he called a trap in the now famous interview with Oprah Winfrey on CBS. “She saved me,” he says at one point in the interview, gazing at his wife, while Oprah looks on approvingly.

He didn’t want history repeating itself, says Harry to Oprah, referencing what happened to his mother and how she was driven to despair. As in the fictional King Charles III, the ghost of Diana seems to hover over everything the royal family does. In the TV movie, the ghost actually makes an appearance, as Diana tells her firstborn William: ‘Such pain my son such hurt/But now you’ll be glad you’ll be the greatest king we ever had.’

Diana’s revenge is a long running theme when it comes to the Windsors, not merely in fiction, as in The Crown and the Channel 4 parody The Windsors. It is especially so this year in what would have been her 60th birthday. William and Harry were expected to celebrate the birthday with a statue commissioned by them and placed in the garden of Kensington Palace on July 1st. Harry, who is no longer Duke of Sussex, refers to it when he talks proudly about their 2018 tour of Australia and how, for the family firm, it brought back memories of his mother’s triumphant tour in 1983 which proved her popularity and sowed the seeds of jealousy and discord on the part of her husband.

The Remembrance of Diana Past is likely to continue well into 2022 when the world will mark the 25th anniversary of her tragic death in a Paris car crash while escaping the paparazzi at The Ritz hotel.

Yet, Meghan is not Diana. Diana was young, inexperienced, abandoned by a husband who was clearly in love with an•other woman, and had no one to turn to. Meghan, as she says during the interview, was a waitress and an actress, had been working since the age of 13, had always been independent, and had Harry to lean on. She may have been prevented by the “institution”, as she refers to the royal family, from seeking help and may have felt let down by not being protected from the feral beast that is the British tabloid press, but as Harry says in the interview, they “always had each other”.

But what makes her case different is her race. At a time of Black Lives Matter, even the mere suggestion that someone in the family could ask about how dark their son’s skin could be was enough to set Oprah’s mouth in an amazed ‘o’, a sound that reverberated across a much more conscious and careful world.

But perhaps everyone is miss•ing the real ghost at the table, that of Wallis Simpson. It was his wish to marry her, a twice divorced American socialite, that caused King Edward VIII to give up the throne. He had to abdicate in 1936 and his younger brother, Queen Elizabeth’s father, became King George VI. Edward and Wallis Simpson were given royal titles, Duke and Duchess of Windsor, but were virtually banished to the continent. It was described by many as a great romance that be•came a great tragedy, not helped by controversies such as meeting Adolf Hitler before World War II and their odd assortment of fascist friends.

So, is Meghan Diana 2.0 or Wallis 2.0? As Harry says in the CBS interview, the mix of race and social media has given other dimensions to her story, something that he too was clearly unaware of. Their interview with Oprah has shades of Diana’s damning 1995 interview with Martin Bashir, where she famously said her marriage to Charles was a “bit crowded” because there were three people in it. But Meghan is perhaps who Diana wanted to be in her later life, and there are reports that she was exploring a career in showbusiness in America once her divorce with Charles came through with a gorgeous Vanity Fair cover in 1997, shot by Mario Testino, just months before her death. It was not to be.

But the Diana legend lives on, burnished almost every year by some screen adaptation, whether it is a season of the long-running Netflix series The Crown, or movies such as the forthcoming Spencer, starring Kristen Stewart as the princess, about the week at Sandringham that Diana decided she would leave Charles. Diana may have been targeted by the paparazzi who needed her pictures to make money—this was before celebrities discovered the power of using social media to control their own narrative—but she was mostly adored. Meghan has seen little except criticism of the most vicious kind from the tabloids, especially in contrast to her ever correct sister-in-law Kate Middleton. The stories may have seemed innocuous but they were clearly hurtful, whether it was the way Meghan cradled her baby bump (is it pride, vanity, acting—or a new-age bonding technique, asked The Mail) or her eating avocados (Meghan Markle’s beloved avocado linked to human rights abuse, drought and millennial shame, said Daily Express).

At the end of the day, perhaps it is just a clash of civilisations that is playing out—a touchy-feely Californian way of life which is all about connecting with one’s emotions versus an old culture of keeping the upper lip stiff and standing one’s ground. Channel 4’s The Windsors mocks it with talk of wellness centres and Harry giving up drinking. It also has Meghan announcing the separation of the House of Sussex from the House of Cambridge and the end of the Fab Four (the brothers and their wives), at the instance of Camilla, portrayed here as a cunning and malevolent presence.

In choosing California over Kensington, will Harry lose his hard-won popularity or will he become a symbol of a new-age man in a world where pain is publicly acknowledged, recognised and assimilated? Diana would have endorsed the latter.