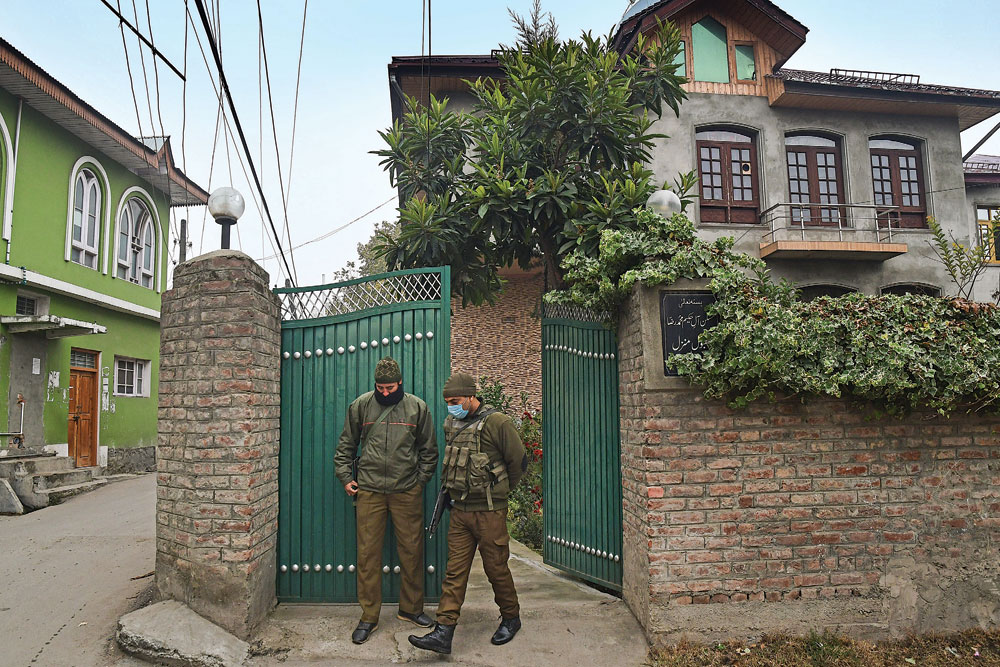 
IN THE SECOND WEEK of November, the names of 76 people working mainly for two local Kashmiri (English) dailies surfaced on posters released on Telaegram and WhatsApp channels. These included, apart from journalists working there, the names of general staff like computer operators and cleaners. All of them were called “collaborators” or “stooges” of the Indian state. Considering that a prominent Kashmiri journalist, Shujaat Bukhari, was vilified similarly and later killed by terrorists in 2018, it created a scare among those named. As a result, five journalists named on the posters resigned from their jobs, citing threats to their lives. One of them told a news channel that he wrote mostly on civic issues and had no idea why he was branded as an Army informer.

These threats, according to the police in Kashmir, have been issued by The Resistance Front (TRF), an affiliate of the Pakistan-based terrorist organisation Lashkar-e-Toiba (LeT). In the ensuing investigation, police raided 19 locations in the Valley, including the houses of a few journalists. “These raids are not random. We are following a trajectory of clues that led us to these individuals, whom we suspect may have some role in these threats,” said Rakesh Balwal, Srinagar’s police chief. The posters, police said, were prepared by Sajjad Gul, the Pakistan-based commander of TRF. According to the police, he was helped in identifying those named on the posters by a former Kashmiri journalist, Mukhtar Baba, who is now based in Turkey.

Behind this threat is a story of the war of narratives in Kashmir. For years, both these newspapers were seen as anti-India and pro-separatist. “We had a joke in the police that these are run from Rawalpindi; only it was not really a joke but a true commentary on the nature of their content,” said a senior police officer. Front-page publication of terrorists’ funerals and news related to separatist organisations like the Hurriyat Conference used to be a regular affair. Many former terrorists wrote opinion pieces using pen names that played a big role in keeping the violence brewing in Kashmir.

This changed after the abrogation of Article 370 in 2019. As the state cracked its whip, newspapers, including these two, changed their course or “fell in line”, as a police officer who monitors the media in Kashmir told Open. In the following years, separatist activities like stone-pelting, hartals, anti-India tirade on social media by individuals, including government servants, began to ebb. With it came a sustained crackdown on Islamist organisations and their sympathisers, including those occupying government positions. This, according to police officers, has left the separatist ecosystem unnerved. And this time they went for overkill. This desperation to change the new reality is reflected in TRF’s statement that came along with the threat. It said that many “credible voices” had been silenced and fake (that is, pro-India) voices had been groomed in the last few years.

In the last few years, police and the National Investigation Agency (NIA) have raided Sajjad Gul’s house in Kashmir several times. He was designated a terrorist by the Centre in April 2020. He has a Master’s degree in business administration and comes from the Bemina locality in Srinagar. Police sources say that he managed to escape to Pakistan along with his wife and children using a proper visa. It was after the events of August 2019 that TRF was created in Pakistan. Gul, according to police, is the man behind the blog ‘Kashmir Fight’, which has in the past named several people as “collaborators” of the Indian state, including the slain journalist Shujaat Bukhari.


Around the time of the killings of minorities in Kashmir in October last year, the blog had also issued a document titled ‘Kashmir Resistance… Strategies to be adopted’. It was a directive on who all could be targeted in Kashmir. It asked, for instance, that non-locals who have been given a new domicile certificate or those who want to “establish any sort of entrepreneurship with any local person” should be targeted. The frustration with sustained NIA raids was also reflected in the document. It spoke of targeting local Kashmiris found to be assisting NIA officials. It also warned that families of senior police officers working in Kashmir could be harmed.

At that time, NIA believed that putting TRF at the forefront was part of the tactics of Pakistan’s Inter-Services Intelligence (ISI) which handles terrorist activities in Kashmir. It was the reason TRF was made to jump, as the main forces of ‘resistance’ in Kashmir, ahead of old terrorist organisations like the Jaish-e-Mohammed, LeT, or even the Hizbul Mujahideen that has most Kashmiris as recruits. Around this time, TRF had also warned house owners and shopkeepers who have CCTV cameras installed outside their premises. This was to ensure that they would not leave behind any trace of their men responsible for these killings. (Some killings of cops had been caught on these cameras, helping police in identifying the killers.)

Gul, according to a senior police source, was helped by two other terrorists in his activities. One of them, Lateef Ahmed Dar, was killed in an encounter with the police in August this year. Dar had been responsible for several targeted killings, including that of a Kashmiri Pandit employee, Rahul Bhat, in May this year. He had been in jail earlier as well and was released in 2013 after which he joined LeT and became a close associate of the notorious Lashkar commander Abu Qasim. The other one happened to be a terrorist called Zia Mustafa who was killed in October last year as security forces took him (under custody) to Jammu’s Poonch division, along the Line of Control (LoC) with Pakistan, to apprehend terrorists hiding in the forest area. Zia had been in jail for the last 18 years for his involvement in a minority massacre in South Kashmir’s Nadimarg area in 2003. But, according to the police source, even in jail he had managed to stay in touch with his handlers in Pakistan, planning several operations in Kashmir.

These threats have been issued by the Resistance Front, an affiliate of Lashkar-e-Toiba. Police raided 19 locations in the Valley, including the homes of a few journalists

Police officials say that the latest threats to staffers of local newspapers stem from the desperation that the war of narratives is being won by the other side (government). “We have been able to target ideologues, academicians, businessmen, trade unions and this is their [TRF’s] way of countering it,” said a senior officer in J&K Police’s Central Intelligence Department.

The resignations have created a stir among Kashmiri journalists though. A journalist whose name has in the past surfaced on the ‘Kashmir Fight’ blog said that many journalists working for mainstream Indian media outfits were wary. They rue the fact that while some editors already have security, many of them do not have that luxury. But that has not stopped terrorists from killing journalists like Bukhari who was also provided with personal security. “We do not know how to deal with this threat. Our families are very worried,” he said.