The outspoken actress once again shakes the Bollywood establishment 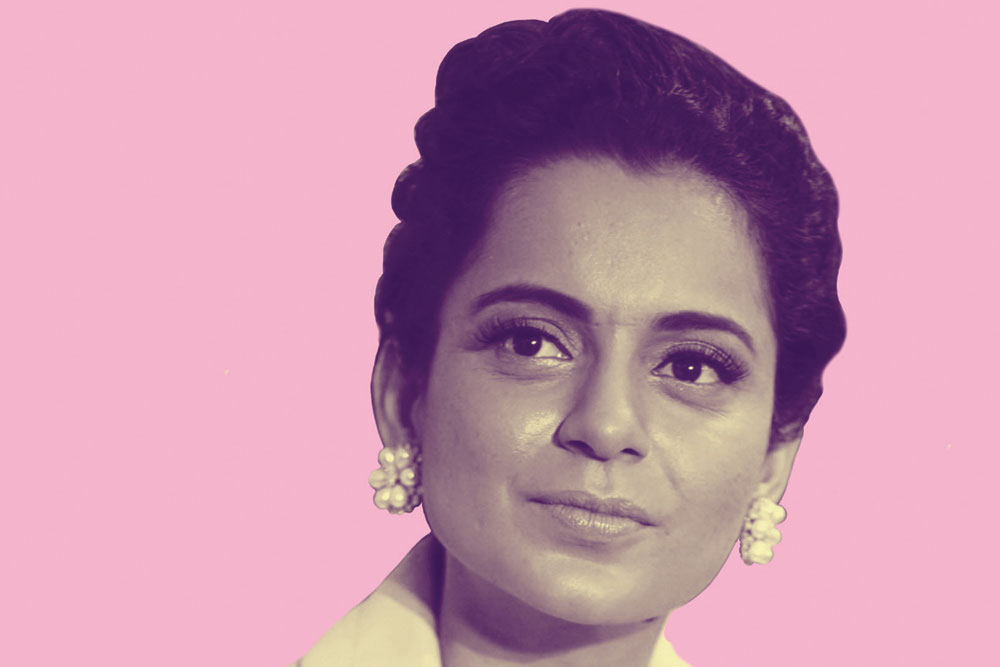 
EVERY FEW YEARS, Bollywood sees fit to destroy itself only to emerge again, changing shape and form. In 1973, it was Amitabh Bachchan who took the idea of the Indian hero by the scruff of its neck and made him respond to the social changes happening around—inequality, corruption, urban angst. Twenty years later, Shah Rukh Khan would be doing it, with his borderline schizophrenic hero, articulating the moral confusion in post-liberalisation India. In 2020, as conventional Bollywood struggles to keep pace with the demand for greater democracy and egalitarianism after the death of actor Sushant Singh Rajput, it is, fittingly, a woman who is trying to drive the narrative.

One can question her motives and call out her inconsistencies. One can criticise her for breaking the unsaid code of honour of not mocking one’s colleagues openly. One can even wonder about her selective outrage. But there is little doubt that actor Kangana Ranaut has become a professional flame-thrower intent on burning down the crumbling old edifice of Bollywood, with all its failings—misogyny, feudalism and dynastic power.

As director Anubhav Sinha says, the Mumbai film industry is peculiar in that very large financial decisions can be taken by individuals, which has the potential to offend a vast number of people. It is not a quality that sits well with the increasingly democratic nature of consumption. Audiences no longer have to be content to suffer only one kind of entertainment. The industry was always limited in its scale of production—it never produced enough. That’s why it can accommodate so few performers. What the upsurge of talent today needs is a real industrialisation of entertainment to live up to the aspirations of the nation’s young, says film scholar Kaushik Bhaumik.

The number of youngsters who now leave home to seek their fortunes away in the world has risen exponentially in the 1990s. This generation now wants Mumbai cinema to deliver what they have experienced and seen in the world. And to live up to the diversity of their lives. Imagine the multiple genres the young use to make media do justice to their experiences—memes, documentaries, porn, Bollywood, music videos, news, stand-up comedy, blogs, social media platforms, says Bhaumik. All this has to be delivered by a new media industry in which cinema is the driving force. This is the revolution we are looking at.

Much of it is because of the artificial shortage of entertainment. Until the opening up of OTT platforms, films were the preserve of barely 9,500 screens in a country as vast and movie-mad as India. In contrast, China has over 69,000 screens and the US has over 41,000 screens. That’s not enough. There is now what poet and CBFC chairman Prasoon Joshi calls a “culture of snacking”, with Indians tasting ever newer content every hour, every day. Old-style movie production houses are not able to satiate this eternal hunger. Outsiders are no longer happy to knock politely at the door of old Mumbai cinema. They’d rather storm the barricades.

And in Kangana they have a readymade rebel leader. She’s someone who has worn her scars proudly, whether it be from love or work. She has talked about honing her craft with confidence bordering on arrogance. She has refused, publicly, to act as a sidekick to boldface superstars. She has also challenged former mentors and shaken a metaphorical fist at erstwhile friends. She has questioned long-accepted practices and refused to turn the other cheek, at least retrospectively. All this is unusual in an industry where a polite veneer covers a lot of simmering ill will. Where chummy backslapping at movie previews will precede almost immediate behind-the-back dissing and where Friday failures are met with poorly concealed glee. And where bad behaviour being passed off as public heckling by hosts at film awards has to be taken with a bright smile and an invisible shrug.

Add to that a filmography that includes some beloved films such as Queen (2014) and Tanu Weds Manu Returns (2015). A much-publicised desire to raise the bar in the quality of filmmaking and not settle for mediocrity. And the ability to beat those who won the genetic lottery with patience and passion, whether it was working on her English language skills, her stylistic grooming or her media relations. Kangana Ranaut is a survivor and she is living to tell many tales.