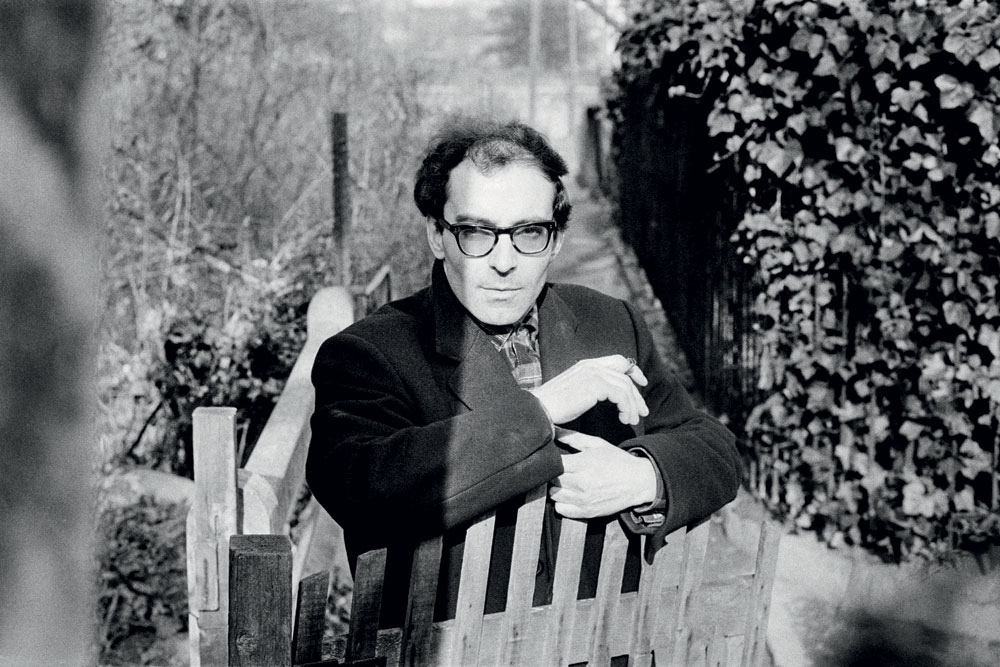 
AFTER THE ENERGY of its youth was spent, two roads diverged in the French New Wave—and Truffaut went right while Godard went left. Few artists allow their careers to be divided into neat com­partments and it’s rather ironic that the filmmaker who broke all, or most, of the rules and couldn’t care for linearity and logi­cality in plotlines, had three nearly distinct periods in his. The New Wave Godard (1960-67) flowed into but wasn’t the same as the radical Godard (1968-72), who was and wasn’t the post-1980 Godard. Perhaps there’s a deeper irony here: Godard’s purport­edly most famous, or ‘popular’, contribution to cinema—the institutionalisation of the jump cut—was more a capitulation to necessity than a predetermined aesthetic leap. He had been asked to cut Breathless (À bout de soufflé, 1960) and thus butchered many of his long takes, producing a departure for cinematogra­phy. It’s important to keep that backstory in mind every time we see Michel (Jean-Paul Belmondo) picking up the gun and—the next time we see him—running down the street shot in the back; falling on his face and—the next time we see him—spread-eagled on his back, cigarette smoke coming out of his mouth.

That in many ways is the story of La Nouvelle Vague, or the French New Wave. And, of course, of Jean-Luc Godard. A com­bination of necessity and conscious (intellectual, aesthetic and technical) rebellion against la tradition de qualité (tradition of qual­ity) and the cinéma de papa (old fogey’s cinema; not quite “daddy’s cinema” as it tends to be translated nowadays) denounced in François Truffaut’s 1954 essay ‘Une certaine tendance du cinéma français’ (‘A Certain Trend in French Cinema’), published in Cahiers du cinéma, which was retrospectively heralded as the New Wave manifesto. Without Cahiers and the twin fathers of André Bazin and Henri Langlois (with his Cinémathèque Fran­çaise), there would have been no New Wave auteur—and Godard wouldn’t have been the Godard cinema came to love and loathe.

The French New Wave didn’t exactly define itself against Hollywood, but both “right bank” (the actual Cahiers group, or the nucleus as Godard called it) and “left bank” auteurs had a love-and-hate relationship with American cinema and drew their inspiration from the exceptions—the auteurs—among American filmmakers, Hitchcock being the foremost, followed by Orson Welles, John Ford, et al. And at home, they went back to Jean Renoir and the “poetic realism” of Jean Vigo. Discarding traditional narratives and rigid scripts (Godard often infuriated his cast and crew by writing the script for the day’s scenes on the sets), filming on the cheap with handheld cameras, shooting in each other’s apartments, often casting friends and family…the mechanics of the New Wave wrote back to Hollywood and made it the progenitor of low-budget, “indie” films. It ended up defin­ing the techniques and technicalities of ad films and documenta­ries too. In the process, the New Wave’s most important achieve­ment became the legitimisation of cinema as an art form in its own right, fulfilling Alexandre Astruc’s argument in his seminal treatise ‘The Birth of a New Avant-Garde: The Camera-Stylo’ (1948): “[C]inema was in the process of becoming a new means of expression on the same level as painting and the novel…a form in which and by which an artist can express his thoughts, how­ever abstract they may be, or translate his obsessions exactly as he does in the contemporary essay or novel.”

The battle between Truffaut and Godard, as the two poles of a move­ment that had had its short run but whose prolonged afterglow lasted well after Truffaut’s death in 1984, will persist after Godard’s death at 91 of assisted suicide in Switzerland on September 13. If one man put forth the theory, the other encap­sulated it in his one-liners. For example (about Breathless): “It was a film that took everything that cinema had done—girls, gangsters, cars—exploded all this and put an end, once and for all, to the old style.” Or: “A story should have a beginning, a middle and an end—but not necessarily in that order.” That’s the whole history and art of the New Wave.


Self-reflexivity, more than the constant nods to past masters (Godard’s ‘hallmark’), tends to elevate form over content and Godard came closer to ‘pure cinema’ than his contemporaries. Ahead of his time, he was also more influential than most

Godard’s Marxism was not foregrounded in the early films. In Le petit soldat (The Little Soldier), about a real war, and Les Carabi­niers (The Carabineers), about a fictional war, both made in 1963, the politics is not too subtle, as is the case with Pierrot le fou (1965) and the Vietnam War. And yet, not one of these is a political film. But Week-end (1967) brought Marx and the market (consumer­ism)—developing from the commodity fetishism in Une femme mariée (A Married Woman, 1964), essentially a film about a woman who can’t choose between her husband and her lover— to the surface in its critique of the bourgeoisie. Week-end is the bridge that connects the New Wave Godard with the “militant Godard” where the Marxism is condensed by Maoism after the upheaval of May 1968.

For the antithesis of the jump cut, take the extremely long take of the traffic jam at the beginning of Week-end. In that track­ing shot that never seems to end lurks the Theatre of the Absurd just as behind making characters address the camera, or leaving the clapperboard in the frame, stands Bertolt Brecht, urging the auteur to distance the audience and make them think. Self-reflex­ivity, more than the constant tributes or “nods” to past masters (Godard’s ‘hallmark’), tends to elevate form over content and Godard came closer to ‘pure cinema’ than most of his contem­poraries. Roger Ebert likened him to Joyce in fiction and Beckett in theatre—ahead of his time, misunderstood in his day, and more influential than most for posterity. Perhaps that made him bigger than his milieu. He certainly outlived Claude Chabrol, Éric Rohmer, Alain Resnais, Jacques Rivette, Agnès Varda and, of course, Truffaut.

The “late Godard” was a quieter but not a less energetic artist. With the enrichment of his lived experi­ence, his preoccupations focused more on human relationships, language—for example, humanity’s old existential crisis turning into an inability of characters to communi­cate in Adieu au langage (Goodbye to Language, 2014)—and a lot more of autobiography seeped into the films, which ranged from Shakespeare (King Lear, 1987) to Dante (Notre musique, 2004), a trend that had begun with Sauve qui peut (la vie) (Every Man for Himself, 1980).

It was hard to come across any reference in the obituaries to one of Godard’s most perceptive peers: Satyajit Ray. So, we might as well conclude with Ray’s de­fence of Godard: “[A] Godard film assumes for me the aspect of a collage, and I for one am convinced that that is how his works ought to be judged, and that is where lies their aesthetic validity…The trouble, really, is not with Godard, but with his critics—or, at least, a good many of them—who are constantly trying to fit a square peg into a round whole. With any other art, I would have said with confidence that Godard would win in the end. But in the ruthless and unserious world of commer­cial cinema that he has to operate, I have my doubts.” (‘A Word about Godard’, collected in Satyajit Ray on Cinema, 2011)

Well, outliving your enemies and friends is one way of winning.