The gold loan market is cashing in on the pandemic 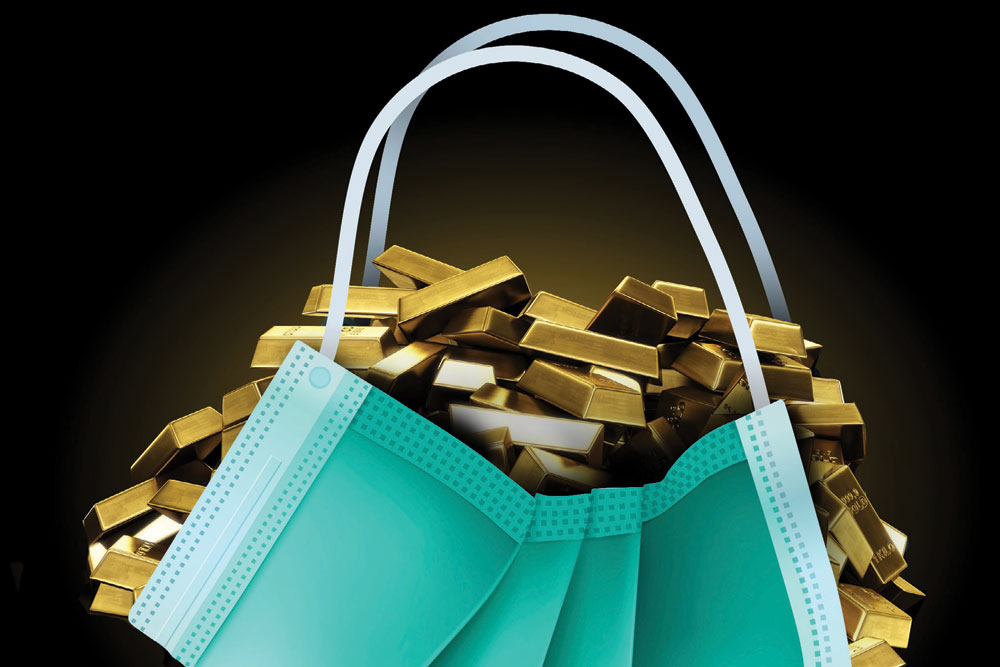 
WHEN JEWELLER BIBEK Rai’s phone rang in April, a month into the nationwide lockdown, he was a bit perplexed. A customer was calling to find out when the store would open. Rai ignored the call as an oddity, but soon there were more. Curious, he finally asked one of the callers about the urgency. “All the people who called wanted to sell the gold they had at home including wedding bangles, considered auspicious among Bengalis,” he tells Open. From his conversations, Rai pieced together that job losses and salary cuts were driving people to sell gold. “Everyone, from those in the corporate sector to smalltime business owners and even government employees, has been affected,” he says.

Rai’s store, in south Kolkata’s Bhowanipur area, is nearly seven decades old. He has himself been involved in the business since his early thirties so when he says that he doesn’t ever remember a time as bad as 2020, one takes notice. And he is not the only one saying so. From Coimbatore, Tamil Nadu to Jalgaon, Maharashtra to Ahmedabad, Gujarat and Delhi, jewellers speak in one breath when they say it’s the worst of times. According to the World Gold Council, in April-June, demand for gold in India plunged by 70 per cent year-on-year.

When Rai was fielding phone calls, Rajesh Anand and his wife Simran, of Amba Jewellers in Lajpat Nagar, Delhi were watching the news with trepidation. Gold prices had began their climb north and there was chaos in Thailand as people, hit hard by the pandemic, rushed to sell their gold. “Honestly, we were expecting the same kind of rush here also when the lockdown was lifted but eventually it did not happen, not at the scale we were worried about,” says Simran Anand, Director, Amba Jewellers. What did happen is that the gold-loan market expanded as crores of cash-strapped Indians faced with loss of livelihoods and mounting expenses mortgaged the yellow metal instead of selling it.

The World Gold Council estimates that Indian households may have 25,000 tonnes of gold worth $1 trillion, mostly in the form of jewellery. India’s relationship with gold needs no introduction. Apart from China, the country is the largest consumer of the yellow metal. It is considered both auspicious and a failproof investment, even when in the form of jewellery. Selling it off to raise funds however remains the last option as a family’s sense of worth is inextricably tied to gold. “When Partition happened, what was the one thing people carried with them? Gold ornaments sewn into their clothes. It has and will continue to be our shelter in the storm. Even today it is the only thing that will get you money in the middle of the night if you need it,” says Ajay Lalwani, President, Jalgaon City Jewellers Association.


From Tamil Nadu to Maharashtra to Gujarat and Delhi, jewellers speak in one breath when they say it’s the worst of times. According to the World Gold Council, in April-June, demand for gold in India plunged by 70 per cent year-on-year

Archana Pathak, a boutique tour operator in Chandigarh, saw her fledgling business whittle down almost overnight even as her husband, a freelance fashion photographer, struggled. She would soon need money for her child’s school fees. “I did not wish to break my fixed deposits and with the market in a free fall, my [mutual fund investments] were as good as redundant. So I did the next best thing, I took out a loan against my wedding jewellery from a co-operative bank.” Pathak considers it the best scenario though there is slight discomfort at the thought of having to mortgage her jewellery. The fact that money is in your hand in under an hour, that too with minimal paperwork and at interest rates better than personal loan is a big attraction. The biggest advantage of a gold loan however remains the increased price of the metal. If choosing to sell ornaments, an individual will have to incur loss on the making charges which hover around 20-25 per cent of the total cost.

In August this year, the Reserve Bank of India revised its guidelines for gold loans, increasing the loan-to-value ratio to 90 per cent after seeing the rush. The earlier limit was 75 per cent. Gold-loan companies have been expanding aggressively in the country over the past two years and according to a January 2020 report by KPMG, India’s gold-loan market will be worth Rs 4.6 lakh crore by 2022. At the time of the report’s publication, it stood at Rs 3.45 lakh crore.

This was however before the pandemic was taken into account. “This year we are looking at a 22-25 per cent increase,” says John Muthoot, Chairman and Managing Director, Muthoot FinCorp Ltd. There are many reasons to recommend a gold loan, says Muthoot, citing easy availability but, primarily, the return on investment. “Today against 1 g of gold, you can raise an amount of Rs 3,600. Just a year ago it was Rs 3,000. Gold loans are the best value for money you can get without selling your gold,” he says. More than 70 per cent of the company’s clients this year are small-business owners, nano companies, as Muthoot refers to these, from fields as varied as retail and manufacturing. “For them, gold loans are the best option, it allows them a chance at re-starting their businesses.” Gold loans also allow families the fig leaf of respectability, even if it is for themselves, of having the chance to get back their gold.

In spite of the size of the gold-loan market, only 35 per cent of it is organised, with the rest controlled by unauthorised money lenders, particularly in rural areas from where two-thirds of India’s gold demand comes. The unauthorised sector has shockingly high interest rates (some can charge up to 50 per cent) which add further burden on a cash-strapped family. Banks and non-banking finance companies (NBFCs), in contrast, charge between 7 per cent and 20 plus per cent.

Traditionally banks haven’t stressed so much on gold loans but now with the rising price of the metal, it is emerging as an attractive form of lending. More and more banks are looking at expanding their services in this field even as NBFCs such as Muthoot and Manappuram woo customers. Manappuram for instance even offered pickup services for those unable or reluctant to come to their branches. When asked if NBFCs are worried about banks expanding into their territory, Muthoot waives away the concern. “There is a huge market for gold loans. Everyone can co-exist,” John Muthoot tells Open. The focus it would seem is very much on rural areas where traditionally banking and organised loans have not been present on a huge scale.

Gold prices are still high even after having dropped a little in the past few weeks but no one is ready to take any bets on it for the time being. RS Gopal Sithya Jewellers is an almost 100-year-old establishment in Coimbatore. S Balaji, the 50-year old proprietor, tells Open even his father is a little taken aback at the leap gold prices have taken. “Whatever sales we had, mostly of small items, also stopped once gold breached the Rs 55,000 per 10 g barrier. Now, everyone is watching. If the price goes down we can expect people to come in but no one is willing to take a bet on when that will happen.” Gold is the only asset that has gained since the pandemic began, so much so that at one point people feared it would cross the Rs 60,000 per 10 g. The steep increase is because of the uncertainty due to Covid-19. Gold, not just for consumers but also for investors, has always been a haven and long-term investors internationally have poured money into gold bonds, etcetera, thus driving the price up. And we are still not out of the woods. With cases increasing in Europe even as the UK considers another lockdown, any uncertainty is enough to make the markets nervous. “The markets will also react to the vaccine news. If there is hope in the coming months, expect gold to rally around, perhaps even drop by a few thousands. If not, well, then anything is possible,” says Shantibhai R Patel, President, Ahmedabad-based Gem and Jewellery Trade Council of India. Besides, jewellers in India are also following the tensions on the border in Ladakh. A whiff of conflict and expect things to become worse, they caution.

In spite of the size of the gold loan market, only 35 per cent of it is organised, with the rest controlled by unauthorised money lenders, particularly in rural areas from where two-thirds of India’s gold demand comes

The Indian jewellery market is one of the largest in the world but 2020 is on track to be annus horribilis. Jewellery demand in the second quarter of 2020 was a mere 44 tonnes against 168.6 tonnes in 2019 in the same period. “We are not expecting things to change much in this quarter also. Whatever little movement will take place will be in the bullion, gold coin segment as people may want to invest in gold. The only reliable trend to have emerged during this time has been the disposition towards gold loans,” says Surendra Mehta, National Secretary, India Bullion and Jewellers Association. Typically, jewellery sales shoot up in the festival season but this time even dhanteras and Diwali offer little hope. “There was a time when artisans and jewellery store owners, employees, we all were immune to the lure of gold because we worked with it so much. If need be, we would fly down artists from West Bengal. Jalgaon after all is a gold hub but today the workstations lie empty. From more than 4,000 artisans in the city, we are down to less than a few hundreds. The festival and wedding jewellery market has come to an absolute standstill. The less said about the diamond trade, the better,” says Lalwani.

The only work that jewellery stores have right now is people coming for either remodelling old jewellery or selling something. “No one is interested in buying right now. My workforce has reduced from 10 to 5 and we won’t know where this will go and end,” says Rai. Even with the abating of Covid-19, it will be some time before stability returns to the market and spending power is back to pre-2019 levels. For, while the pandemic may have impacted the economy heavily, slowdown had already set in when the virus unleashed its wrath.