Falguni Nayar: Beauty and the Boss 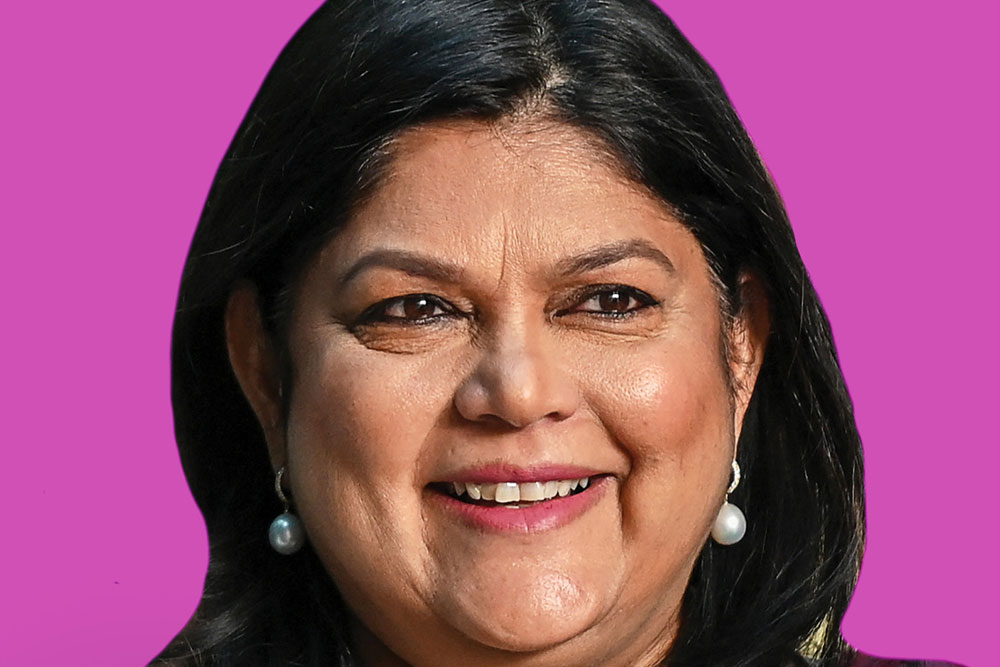 IN A SEASON where multiple startups, most of them tech businesses built by young male founders, have raised phenomenal sums of money by choosing to go public, a somewhat less assuming business, the beauty e-tailer Nykaa, whose founder less than a decade ago was a 50-year-old woman working in a bank with little idea of beauty products, made a sensational debut as an initial price offering (IPO).

FSN E-Commerce Ventures, the parent company that runs Nykaa, saw its shares rise 96 per cent on its first day in the market from its IPO price of ₹ 1,125 to close the day at ₹ 2,207, a market cap of about ₹ 1.04 lakh crore (or a little over $14 billion), making its founder Falguni Nayar, as the media have termed her, “India’s richest self-made woman.” With about 54 per cent stake in the company, her net worth, according to Bloomberg Billionaires Index, surged to nearly $7 billion. Nykaa is now more valuable than Coal India, Britannia, BPCL, and just a little below auto giants like Mahindra & Mahindra and Bajaj Auto. Unlike most founders who reduce their stake in the startups as they seek capital from investors, since Nayar has retained about 54 per cent stake in the company, she has also leapfrogged other startup founders in personal wealth—for example, Vijay Shekhar Sharma of PayTM and Deepinder Goyal of Zomato are reported to be worth $3 billion (15 per cent share) and $650 million (5.5 per cent share), respectively—to be counted among India’s 20 richest individuals.

Nayar was an investment banker at Kotak Mahindra Bank before she started Nykaa in 2012. Her experience at the bank, where she had guided many entrepreneurs through the IPO process, is believed to have stoked her ambition to start a business of her own. Although she had very little knowledge about the beauty and cosmetics industry, in her interviews, she has described getting into it because she realised it was an underdeveloped market in the country, one where companies with deep pockets had yet to move in.

While Indians in the last decade got over their hesitation about shopping online for all sorts of products, it wasn’t the same in the beauty industry. Most Indian women still buy their make-up products at neighbourhood stores, and it is the rare woman who buys a lipstick, for instance, without selecting a shade from multiple lines drawn at the back of her hand. Nayar got over these by focusing on, what she calls, the “art of retailing”, which is getting the right assortment and the latest launches, followed by educating the market through beauty tutorials from make-up artists and bloggers. An online platform could also provide an array of products, unlike the neighbourhood store, which only stocks the top-selling products.

Nykaa is fundamentally different from most other startups. At its core, it is a traditional Indian family owned business, with the family owning the majority stake, and Nayar and her two children working for the company. Its stellar debut at the stock market also has to do with the other crucial factor where it differs from all other startups. It is actually profitable. Also, unlike other startups, Nayar has refrained from raising huge sums of money and then throwing them to acquire more customers.

“[W]hen I used to fundraise, people would say, ‘Oh! you raised so little’,” she said in a recent Economic Times interview. “That was because they wanted me to raise more money so that the transaction got noticed. But that’s not the way to build a company. We raised capital and diluted only what was needed at that point of time.” The pandemic proved to be a blessing in disguise. The online shopping binge during this period boosted Nykaa, and according to a Forbes report, Nykaa’s annual revenue went up to $334 million for the fiscal year ending March 2021, from $236 million in the previous fiscal year, resulting in a profit of $8 million in that same period.

Nykaa isn’t just the largest beauty retailer today. Apart from selling multiple brands online, it has also opened multiple brick-and-mortar stores, and has even entered the fashion business. After its IPO success, Nayar will need to ensure Nykaa continues to grow but without losing the old rational approach that made it stand out from the herd.