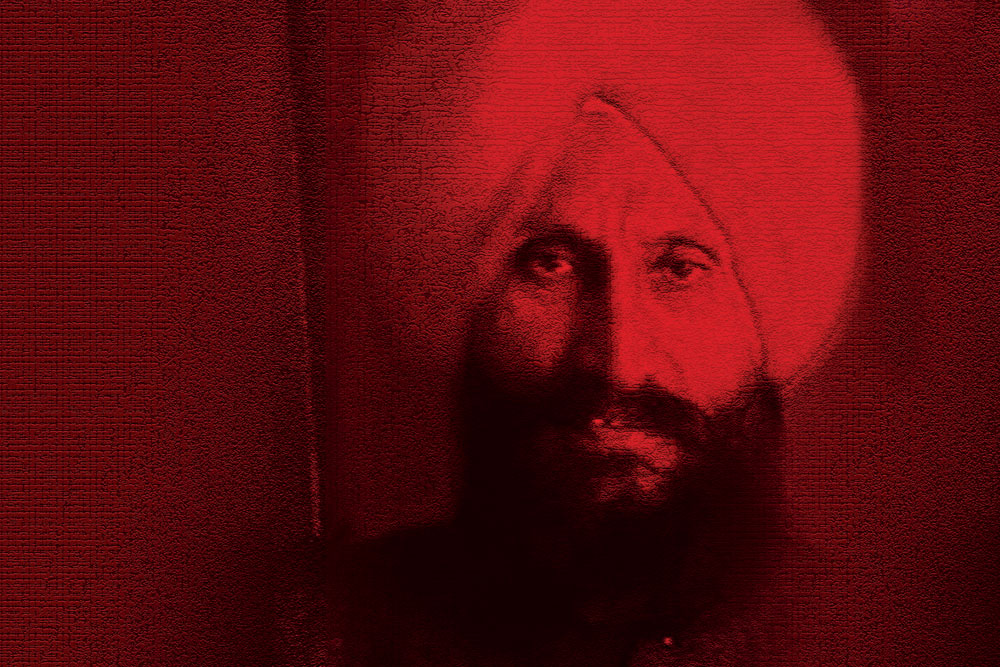 
JUST A LITTLE BEFORE 7AM on October 16th, 2020, Balwinder Singh Sandhu opened the lock on the main gate of his house in Bhikhiwind village in Punjab’s Tarn Taran district. He turned back and headed towards the administrative room of a school he ran from the same complex. Just then a shadowy figure pillion riding on a motorcycle outside deftly opened the latch of the gate and sneaked inside. A few minutes later, as Sandhu appeared from the room, walking towards his home, the man lunged forward and shot several times at him with two pistols. He ran afterwards towards the motorcycle; the tall man driving the bike had kept the engine on, and both fled from the spot.

Sandhu was rushed to a nearby hospital, but he was declared dead on arrival.

Sandhu was a national hero; in the 1980s and early 1990s, when Sikh insurgency was at its peak in Punjab, he had been vocal against Khalistani extremists, earning their ire. In that period, there had been more than a dozen attempts on his life by terrorists, including one in September 1990 when about 200 terrorists attacked his house with sophisticated weapons, including rocket launchers. Sandhu and his brother and their wives fought bravely with weapons provided to them by the government and managed to stave off the attack that lasted over five hours. For a time when, in certain instances, even policemen would run away from the site of a terrorist attack, such display of courage earned Sandhu and his family the Shaurya Chakra.

By the mid-1990s, the Khalistani insurgency in Punjab was over. Sandhu continued to get a security cover from the government, but it had been finally withdrawn in 2020 despite Sandhu’s protests. A lone gunman offered to him would also come on duty sporadically.

As the police began their investigation, they looked at several angles. But there was hardly any doubt that Sandhu’s killing had been the handiwork of Khalistani extremists. Militancy in Punjab was over but the Khalistani network, from Pakistan to Canada, was intact in many ways. Targeted killings of individuals vocal against Khalistani extremists were still happening every now and then.

The first thing the police team investigating Sandhu’s murder looked at was the CCTV footage from a camera installed on Sandhu’s compound. It had captured the moment when he was killed: the assailant is seen firing six shots at him. From another CCTV camera, installed outside Sandhu’s neighbour’s house, the two men were spotted again in the footage. Tracing the trail, the two men on their bike were picked up again in footage recorded by another CCTV camera installed outside a school on the outskirts of the village.

As other CCTV cameras were examined, the police noticed something peculiar. On the main road outside the village, a similar bike, a Bajaj Pulsar 220cc, is seen being ridden. But perhaps it was some other similar-looking bike, the investigators surmised. The tall man driving the bike from Sandhu’s house was not on it. Both men on this bike were wearing different clothes from the two seen in the footage from the crime scene. But upon close inspection, the police realised one thing: one of the men—wearing different clothes—on this bike was wearing the same pair of sneakers as the man who shot Sandhu.

“In the next few days we combed thousands of CCTV cameras to trace the two men,” said Dhruman Nimbale, senior superintendent of police, Tarn Taran. As scores of policemen were put on the job, they went through video footage in 3,400 CCTV cameras. The trail of the bike finally stopped in the industrial town area of Ludhiana, 143 kilometres away from Sandhu’s house. Here, the bike is seen entering a crowded area where mostly industrial workers live. Local police teams were put on the task; they searched everywhere, but could neither find any clue about the two men nor spot the bike.

It was at this point that the investigating team decided to put its sources on the job to pick up chatter from a few prisons in the state. From the experience of the past few years, it has been established how, in the absence of their own trained men on the ground, the Khalistani extremist network uses the services of gangsters lodged inside Punjab’s jails to target individuals. In 2016-17, Pakistan-based Khalistani terrorists orchestrated eight targeted killings in Punjab, of individuals mostly belonging to Hindu organisations like the Rashtriya Swayamsevak Sangh.

This strategy bore fruit; from a man lodged in Firozpur jail, the police picked up murmurs about targeting Sandhu and how his assailants were given shelter by a man in Ludhiana. This man in prison turned out to be the cousin of one of the people who were in the know about the plan of attack on Sandhu. On the basis of this information, Punjab Police made their first arrest in the case.

The man, Chand, who gave the two assailants a place to hide, was arrested. The hideout turned out to be on the third floor of a blocked street where the two had managed to bring the bike inside as well. Afterwards, it had been broken into parts and dumped in the river. But the two men, now identified as Sukhdeep Singh alias Bhura and Gurjit Singh alias Bhaa, had fled from the hideout. It was Bhaa who had hidden inside Sandhu’s house and then shot him. Bhura was seen driving the bike later towards Ludhiana.

In the meantime, police informers in Tarn Taran had also pointed at a man in a village near Bhikhiwind. They said the man, over six feet in height, was not employed nor had any notable source of income. A few days after Sandhu’s killing, he had gone missing from the village. He had told some of his friends that he was planning to move abroad. The man was identified as Inderjit Singh; the police immediately issued a lookout circular for him.

Bhaa, the police realised from his previous criminal record, was a heavy user of heroin. They knew he had to be hiding in a place where he could get access to the drug. Later, acting on a tipoff, the two were arrested by the police in Delhi in December.

Sandhu’s killing was the handiwork of Khalistani extremists. Militancy in Punjab is over but the Khalistani network, from Pakistan to Canada, is intact

A month later, in January, Inderjit was arrested from Mumbai airport as he prepared to catch a flight to Dubai. Upon interrogation he told the police that he was the tall man who had driven Bhaa to Sandhu’s house and then taken him back to a spot where his friend Bhura waited for them. After Bhaa’s and Bhura’s arrests, he had moved from one place to another, from Madhya Pradesh and Bihar to finally Mumbai from where he had been assured a sanctuary in Dubai by his handlers.

With the killers under arrest, the whole conspiracy was unravelled. It was revealed that the plot for Sandhu’s assassination was hatched by Lakhbir Singh Rode, the Pakistan-based chief of the terrorist group International Sikh Youth Federation (ISYF) and one of its Canada-based operatives, identified as Sunny Toronto. Rode happens to be the nephew of the slain fountainhead of Khalistani separatism, Jarnail Singh Bhindranwale, killed in an army operation in Amritsar’s Golden temple in 1984.

RODE AND HIS co-conspirators, the police investigation has revealed, had prepared a list of individuals opposed to their ideology in Punjab and elsewhere and wanted to eliminate them. For this, they used the services of a gangster, Sukh Bikhariwal, who had escaped first to Doha, Qatar in 2018 and had been living in Dubai on a fake passport ever since. On the request of the Indian authorities, he was also extradited in January and arrested by the police after landing in Delhi.

Inderjit revealed that he had come in touch with Sunny Toronto on Facebook. After reading his radical, pro-Khalistani posts, Sunny had contacted him. It was on his instructions that he had conducted a reconnaissance of Sandhu’s house. Sunny told him that Sandhu was a villain as he had been instrumental in killing many Khalistani insurgents during the peak of militancy in Punjab.

As Inderjit began his recce, he realised that earlier Sandhu left every morning to buy milk nearby, but he had stopped doing that of late. He reported this to Sunny. In the meantime, Sunny had hired Bhura and Bhaa through Bikhariwal and sent money to various people involved in the conspiracy through hawala channels. At first, a .30 bore pistol was arranged for Bhaa and Bhura for the kill. As they conducted target practice in Ludhiana, they realised that the pistol was getting jammed repeatedly. Then a 9mm pistol was arranged for them, which they collected from an operative near a toll plaza in Amritsar city.

The night before, on October 15th, Bhura and Bhaa reached Tarn Taran on their bike. At a preordained spot, the two met a masked Inderjit. To make sure that the two were meeting the right person, they had decided on a password. That is what Bhaa used when he spotted Inderjit at the spot. “Ferozepur jaana hai,” he said. Inderjit replied, “Haan, Ferozepur jaana hai.” They spent the night inside a pumphouse.

The next morning, Inderjit picked up Bhaa and took him to Sandhu’s house where he killed Sandhu. Their handlers had asked them to wear multiple layers of clothes so that the outer ones could be discarded after the kill to evade identification. The two did exactly what they were told, but Bhaa was very fond of the pair of sneakers he was wearing. He had been asked to get rid of them, but chose not to.

This proved to be his Achilles heel, which finally led to the busting of the entire module.

After the assassination, Sunny Toronto had arranged a visa to Dubai for Inderjit and also fake passports for Bhura and Bhaa. But before they could avail those, the case had been cracked open. Because of its international links, the case was transferred to the National Investigation Agency (NIA) in January this year. The agency has filed a chargesheet against all accused and further investigation is on.