The Dog That Didn’t Pee

Celebrity reality shows work if their subjects are either fabulously crass or fabulously classy. Streaming services have some answers but does the genre have legs at a time when the pandemic has leashed even our fantasies? 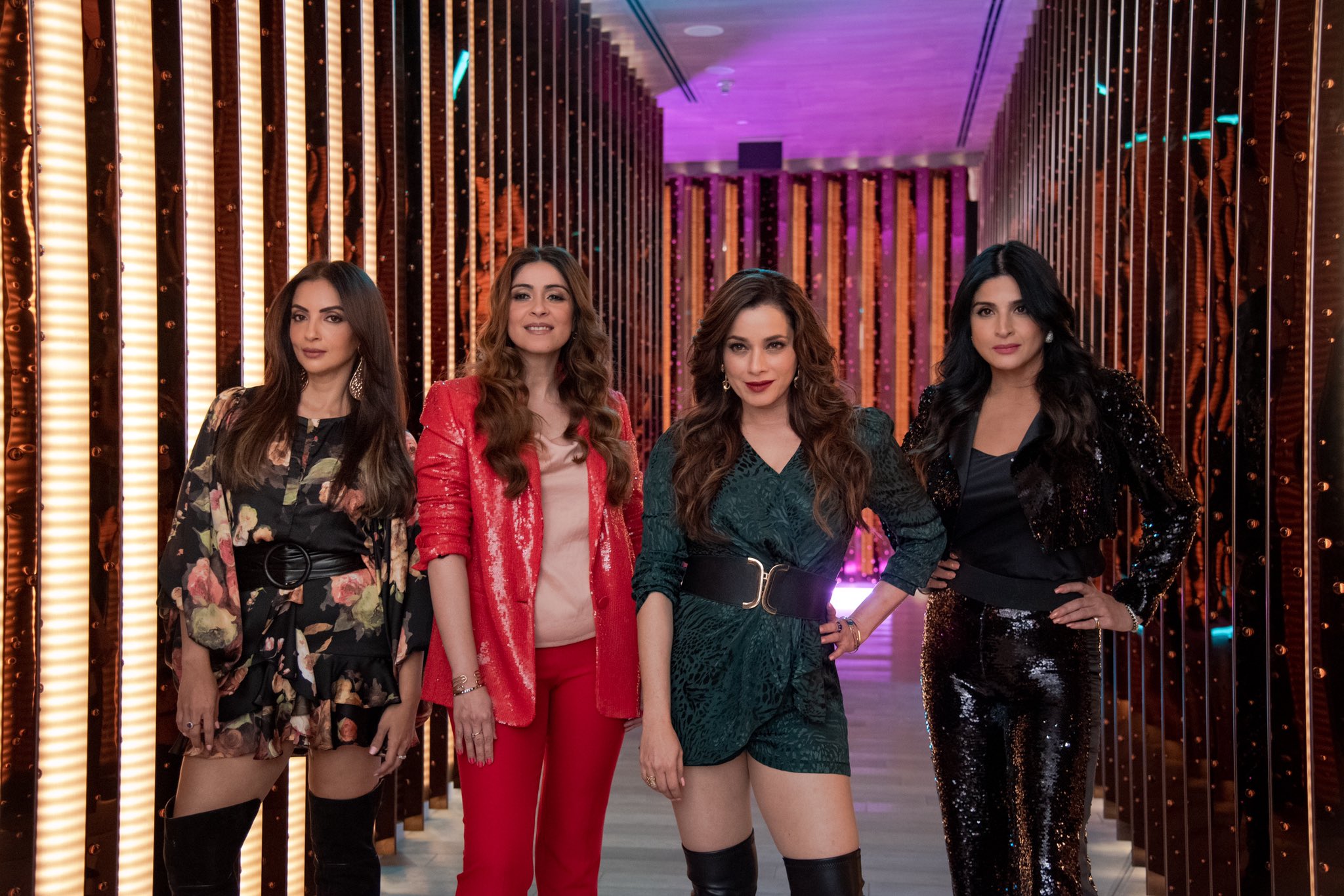 A scene from The Fabulous Lives of Bollywood Wives


There is a scene in The Fabulous Lives of Bollywood Wives where Seema Khan cuddles a beautifully manicured dog wearing a diaper. It sums up the celebrity reality genre in India. Even the dog is afraid of making a mess onscreen, terrified of a pee or a poo. Keeping up with the Kardashians worked for 20 seasons because the Kardashian-Jenner clan was not afraid to get ugly on screen, even if it was over something as trivial as Kim’s sleep being disturbed or Kim and Khloe fighting over who should get which room in the resort they’re staying at. In Bollywood Wives, it takes the intervention of Karan Johar, producer of the show and Everybody’s Best Friend Except Kangana’s (EBFEK), for the first and only real fight to happen. But even that quickly fizzles out, with Seema Khan and Bhavana Pandey on their best behaviour soon after.

Netflix, the streaming service where the show premiered late last month, isn’t particularly put off. The show has ranked Number 1 not merely in India but also in countries with similar bling-cringe-binge tastes: the UAE, Pakistan, Bangladesh and Sri Lanka. In a year that open nepotism and unashamed display of privilege have taken a severe beating, with Johar even briefly retiring from Twitter after the backlash he faced for his alleged role in Sushant Singh Rajput’s death, Bollywood Wives screams entitlement. Here are four beautifully maintained women on the periphery of Bollywood taking us inside their sprawling homes (by Mumbai standards), their expensive lifestyles and their super rich husbands. Only not. In reality, the four women at the heart of Bollywood Wives seem just like us: kitty party aunties on tight budgets.

They have husbands who install security cameras to check on whether the servants are quaffing the Japanese whisky on the sly, who step on their daughter’s toes while dancing and who prefer to laze around in their PJs than attend a party celebrating their wives’success. In the fourth case, Seema Khan’s husband is just a technicality—the fashion designer can’t even utter the D-word when it comes to talking about her husband, producer and actor, Sohail Khan, though she does say they live separately.

The reality is something that is all too cruel. The Fabulous Lives of Bollywood Wives should actually be renamed ‘The Sponsored Lives of Gauri’s Best Friends’. Sure Maheep Kapoor is sister-in-law to Boney and Anil Kapoor but it’s a family that defines itself by being called The Other Kapoors, their claim to fame being that their father Surinder was secretary to Geeta Bali, first and much loved wife of Shammi Kapoor from the First Family of Kapoors. Bhawana Pandey is wife of Chunky Pandey whose best years were in the ’80s with Govinda. Neelam Kothari Soni was his frequent co-star. And Seema Khan, well, she is famous for being sister-in-law of Salman Khan and designer of a label that only friends seem to want to wear. What unites them is their varying degrees of friendship with the Real First Lady of Bollywood, Gauri Khan, whose MO they’d like to follow, parlay a famous last name into a business, transitioning from simply being an influencer to being an entrepreneur. Next time we see them, they may well be paying their way, instead of freeloading furiously, through get-togethers at posh restaurants in Mumbai, a debutantes’ ball in Paris and a girls’ holiday to Doha. Maybe they’ll even get invited to the next wedding in the Bachchan household so Maheep can retire her binoculars.

And that is the reality of the new wave of celebrity reality shows, from Masaba Masaba to the forthcoming AK vs AK to next year’s special, tentatively titled Actress, based loosely on Madhuri Dixit Nene’s life as an actress floating between her public persona and personal life. In Masaba Masaba, the most self aware of the celebrity reality shows, designer Masaba Gupta was not afraid to give audiences a scripted taste of her true life. In AK vs AK, Anurag Kashyap and Anil Kapoor play exaggerated versions of themselves, with Anurag being a frustrated director and Anil playing an over-the-top ageless actor who refuses to retire. In Actress, Dixit Nene is again making ironic use of her celebrity.


AK vs AK, which began life in 2017 as SK vs AK (Shahid Kapoor vs Anurag Kashyap) before the actor walked off the sets, is intended as a social commentary on the public and private lives of Bollywood dwellers. Anil Kapoor plays a man whose daughter is kidnapped and has 24 hours to get her back. Adding a twist to the proceedings is that his real daughter Sonam plays his onscreen daughter. Several members of the Kapoor clan, from brother Boney to son Harshvardhan, make an appearance proving Kashyap’s comment onscreen that all you need to break into Bollywood is to have a Kapoor surname. Even if it belongs to the less famous Kapoors.

AK vs AK comes with a whole package of the director and actor engaging in a feud on social media that seems all too real. There’s an element of darkness in it that is missing in other celebrity reality shows. Even Masaba Masaba stopped short at irony. Its director Sonam Nair says they wanted to take away the aspirational tag of celebrity life and actually show that it’s not all that it’s cracked up to be, and that celebrities, their problems, family lives and dating lives, are much more relatable than we might think.

AND THEN there is an even more intelligent way of using celebrity, which Rana Daggubati is doing with his own media platform, South Bay. Daggubati believes mainstream celebrities have a responsibility to the many subcultures that exist. “My hope is to marry two worlds, A-list mainstream, movie stardom, and the most alternative music or art form available” he says, in order to make more forms of culture and entertainment accessible to all. In many ways, it embodies him. The actor, producer and star of the Baahubali franchise is a product of Mad magazine and Amar Chitra Katha comics. That union has produced a sensibility that backs a Goth album from actress-singer Shruti Haasan and Los Angeles-based Telugu-origin rapper Raja Kumari. It has also produced a chat show, Why Are You?, in which animated versions of Daggubati and his guests talk about sense and sensibility. So filmmaker Ram Gopal Varma discusses with him what porn the former watches, even as Dingo, the animated man-dog, makes disapproving noises. “We are breaking all the rules,” he says, “of duration, target group and timelines.”

That’s not all. The platform has news for under-25s by a group of under-25s. Daggubati wants South Bay to symbolise the free world of the internet, beyond trending towers and 280 characters. “Everyone is a creator now,” he says, “from the person who creates a GIF to the creator of a big cinematic spectacle.” And everyone is a consumer and sometimes a voyeur too, whether it is of Twinkle Khanna laughing at Karan Johar on his own talk show, Koffee with Karan, or Samantha Akkineni making Daggubati cry by asking him about his recent illness on her chat show Sam Jam.

But while Daggubati’s celebrity usage intends to elevate, Bollywood Wives clearly intends to cater to the most common gossip in us. The gossip that got its fix on Koffee with Karan  and its precursor, Rendezvous with Simi Garewal. That was the joy of eavesdropping on the lives of famous people, the television equivalent of movie tabloids with open confessions of who slept with whom, for how long and sometimes even how well. It’s much the same craving that can be filled with Indian Matchmaking and with the British show Too Hot to Handle, but with slightly famous people.

Will the pandemic increase our appetite for fabulous lives or will our newly minted global tastebuds demand a new level of fabulousness? After all, Gauri and Shah Rukh Khan have already rented their south Delhi house to Airbnb so people can experience a whiff of their lifestyle. Next stop: a Netflix series set in Mannat? Or Jalsa? Or Antilia?