Congress’ humiliation in Munugode marks its steady erasure as the main opposition in Telangana but as bypoll results elsewhere show, the party’s crisis does not end with one state 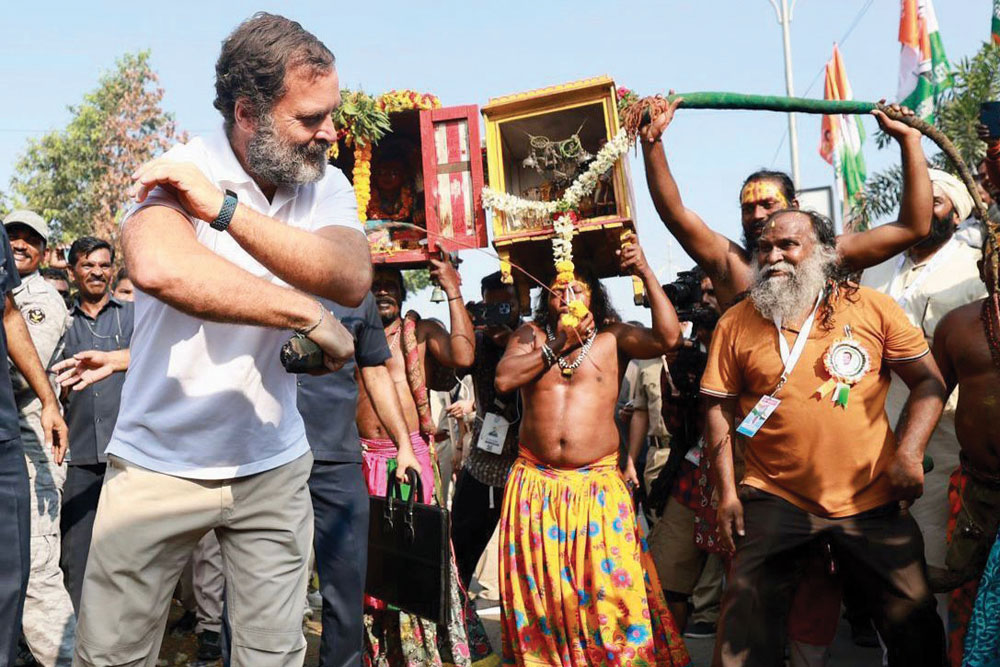 Rahul Gandhi wields a whip as he joins the Bonalu celebrations in Telangana, November 3, 2022 (Courtesy: AICC)


AS RAHUL GANDHI’S BHARAT JODO YATRA exited Telangana on November 7 after covering 375 km, 19 Assembly and seven Lok Sabha constituencies over 10 days, many in Congress were left wondering if he should have undertaken a “Congress Jodo (repair Congress) campaign” in the state instead. Telangana Pradesh Congress Committee (TPCC) president A Revanth Reddy, Congress Legislature Party leader Mallu Bhatti Vikramarka, MP Uttam Kumar Reddy and senior leaders like V Hanumantha Rao and T Jayaprakash ‘Jagga’ Reddy appeared upbeat while participating in the march, but there was little to cheer. The results of the Munugode Assembly by-election had only just come in the previous day. Kusukuntla Prabhakar Reddy of the Telangana Rashtra Samithi (TRS) had won, polling 96,598 votes, 10,113 more than the Bharatiya Janata Party’s (BJP) Komatireddy Rajagopal Reddy (86,485), in a high-stakes contest that saw Congress finish a distant third with Palval Sravanthi losing her deposit, polling just 23,864 votes.

The story did not stop in Telangana. Congress’ crisis was reflected in the bypoll results in five other states as well. The party lost the Adampur seat in Haryana where its former leader Kuldeep Bishnoi had crossed over to BJP. Bishnoi’s son Bhavya won the seat comfortably. As in the case of Munugode, Congress lost another bastion due to Bishnoi’s fallout with the state leadership. It was a non-starter in bypolls in Uttar Pradesh (UP) and Odisha where it remains relegated to the sidelines. While UP has presented insurmountable hurdles for the party, its continued irrelevance in Odisha must hurt as the party once counted on a large vote bank of tribals and small farmers to win elections. In Bihar, the failure of the combined opposition, which includes Congress, to oust BJP from Gopalganj was more unwelcome news.

THE STORY OF organisational decline is being replicated in state after state even as Rahul Gandhi continues on his yatra and after a controversy-hit party election saw veteran Mallikarjun Kharge installed as party president. In Gujarat and Himachal Pradesh, where polls are round the corner, Congress leaders have joined BJP complaining of a moribund leadership that has no time or appetite for the hard yards that grassroots politics requires. There was no tweet from Rahul Gandhi after the bypoll results even as BJP IT cell chief Amit Malviya rubbed it in, saying, “AAP lost its deposit (in Adampur) and Congress is on yatra…”

The Munugode seat had for long been a Congress and Left bastion, with Sravanthi’s father Palvai Govardhan Reddy and the late Ujjini Narayana Rao of the Communist Party of India (CPI) each representing it five times. Pollsters, in fact, partly attribute TRS being able to edge out BJP to its alliance with CPI. Komatireddy Rajagopal Reddy, too, had won the seat on a Congress ticket in the 2018 Assembly election, but in August 2022 he joined BJP, citing irreconcilable differences with the state Congress leadership and this led to the bypoll. With Union Home Minister Amit Shah billing the Munugode contest as a referendum on the popularity of Chief Minister K Chandrasekhar Rao (KCR), it quickly became a showdown between the state and the Centre with cash, liquor and insults flowing freely. Caught between the TRS mobilisation and administrative muscle and the no-holds-barred campaign of a BJP determined to expand its footprint in Telangana, Congress’ weaknesses were cruelly exposed. Rahul Gandhi had taken several digs at KCR over his national ambitions, suggesting these were pipe dreams, and accused TRS of being hand-in-glove with BJP. But the scale of Congress’ defeat plainly showed voters were missing Rahul’s message with the party’s fortunes continuing to decline.

“Rahulji is the reason I am still a Congressman,” asserts Jagga Reddy, the Sangareddy MLA who has declared he will keep away from state politics over his differences with the TPCC president. “It is because I, and many other Congress leaders, want to work with him that we are in the party despite the many differences within the state unit,” he says. Reddy walked with Rahul as he played cricket with children and learned to lash himself in the tradition of Potharaju, a character in the annual Bonalu procession who is said to be the brother of goddess Mahankali. But even as Reddy was showing Rahul how to wield the Potharaju whip without injuring himself, the Congress scion was unable to offer any succour to his party. At a time when TRS faces anti-incumbency currents, perhaps the strongest since the bifurcation of Andhra Pradesh, the Telangana Congress seems incapable of seizing the moment. “If we don’t seize this opportunity, we will have to wait 10 years,” says Jagga Reddy, warning BJP is busy trying to poach disgruntled leaders. “BJP has approached about 15 people who aren’t entirely happy with how the party is being run but they don’t feel like leaving Congress,” he says.


Those who would rather not risk their political prospects being reduced to nothing have been considering BJP which wants to back winning horses—especially candidates who have won successive elections, says Etela Rajender, BJP MLA from Huzurabad. Rajender, a former minister in the TRS government, joined BJP last year and secured a resounding win in the Huzurabad bypoll, the second for the party after another ex-TRS leader, M Raghunandan Rao, won the Dubbaka seat in 2020. KCR’s anti-BJP activism can be traced to these setbacks. Even though BJP lost the Munugode election, it has, by giving TRS a tough fight and forcing Congress out, taken its first steps in southern Telangana. Losing the Munugode poll need not be disheartening, argues Rajender. “KCR fought as though he himself was the candidate. All his ministers and dozens of MLAs descended on the constituency to campaign, and still, he won with a small margin with the help of the communist vote. Write this down: KCR has never been so vulnerable. What the Munugode bypoll has established is that if there is a party that can beat KCR, it is BJP,” asserts Rajender.

Amid aggressive campaigning by both sides, KCR accused BJP of conspiring to overthrow his government by poaching four TRS MLAs—Rohith Reddy (Tandur Assembly constituency), Rega Kantha Rao (Pinapaka), B Harshvardhan Reddy (Kollapur) and Guvvala Balaraju (Achampet). “They refused crores of rupees offered to them by brokers sent from Delhi to switch loyalties. This is Telangana’s flag of self-respect,” Rao said at a press conference on November 3, releasing videos allegedly showing representatives from BJP negotiating with MLAs. It is unclear how much the allegations affected the result, but they did muddy the waters with BJP claiming that the charges were trumped up by KCR as the leader had his back to the wall.

THE BATTLE FOR Munugode was not about self-respect or Telangana pride, as claimed by KCR, but about one-upmanship, says Sravanthi. “This was perhaps the first time Congress had to face a state government and a Union government,” she says. Her campaign faced underhand jibes and she filed a complaint about an attack on her convoy. Sources in the party say senior leaders were more focused on welcoming Rahul Gandhi than on Munugode and even arranged to send 30,000 people from the constituency to attend the Bharat Jodo Yatra. Interestingly, Sravanthi had not done too well when she had contested the seat as an independent in 2014 but got 27,441 votes—more than she could bag this time. The Munugode campaign is likely to have left supporters wondering if she should rid herself of the Congress label. “It is out of the question. I have a big task ahead—to go back to the people and to regroup our cadre, including those who had left with Rajagopal Reddy,” Sravanthi says.

Caught between TRS’ mobilisation and muscle and the no-holds-barred campaign of a BJP determined to expand its footprint in Telangana, Congress’ weaknesses were cruelly exposed

Congress’ decline in Telangana, from a paltry19 MLAs in a House of 119 after the 2018 Assembly election to just five now, began much before BJP entered the picture. “Congress is in this state today because it lacked the integrity to stave off KCR’s attempts to buy its MLAs. It is KCR himself who, by trying to finish off the opposition, paved the way for BJP in Telangana,” says Etela Rajender. Ironically, three of the four MLAs KCR has accused BJP of trying to buy were elected on Congress tickets in 2018. “Many Congress leaders feel at a loose end. On the one hand, TRS has made elections all about money and we cannot spend as much. On the other, Congress itself is unstable and shifting. It lacks organisational ability and the strength that comes with unity,” says a senior leader, declining to be named. “When they ask for campaign donations now, many of us are uncomfortable with contributing because of the opaque ways of the party. Husbanding the party’s resources to back the best candidates in at least 50 seats next year should be our goal. Otherwise, BJP will take our place as the opposition party,” he adds.

Munugode may have been a BJP vs TRS showdown but it is only the latest in a string of upsets for Congress since 2018. In 2019, TRS won the Huzurnagar Assembly bypoll with its candidate, Shanampudi Saidi Reddy, beating former TPCC president Uttam Kumar Reddy’s wife N Padmavathi Reddy by 43,358 votes. In the Nagarjuna Sagar byelection last year, where Congress fielded veteran leader K Jana Reddy, it again faced a humiliating defeat at the hands of a young TRS candidate, Nomula Bhagat. KCR may have slowed BJP’s onward march in Telangana for now, but the saffron party is clearly the challenger and it is a matter of time before it presses TRS harder.