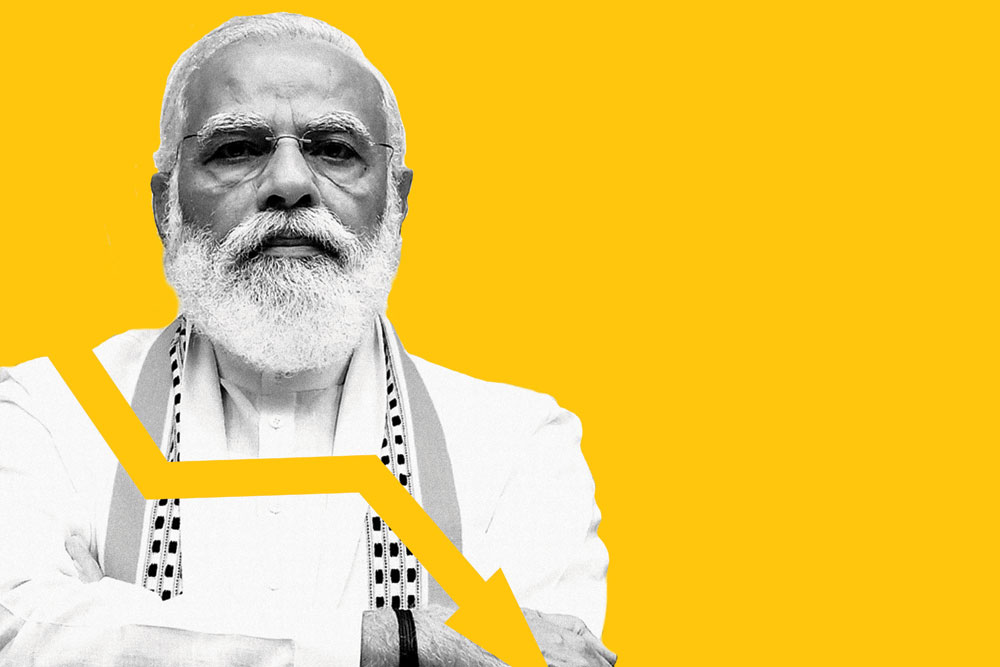 
When the quarterly data for India’s economic production were announced at the end of August, it seemed as if the economy had fallen off a cliff. With the exception of agriculture, no other sector remained unaffected by the destructive gale of the pandemic. But that was the least of it. The human misery caused by the combination of a weak economy and a raging viral outbreak was well known even if its exact contours remained unmapped. Some of that can be gauged now as the Government’s statistical machinery begins churning out data.

On September 14th, when Parliament convened for the Monsoon Session, the Government released two sets of figures that showed how badly Indians had been affected by the events since March this year. In response to a question, the Government stated that 1.046 crore migrant workers had returned to their home states till the date of gathering the data. States such as Uttar Pradesh (32.4 lakh), Bihar (15 lakh), West Bengal (13.8 lakh) and Rajasthan (13 lakh) accounted for the most migrants. If agricultural growth appeared like a ray of hope, these numbers highlight the burden that rural India has borne in the months of the lockdown. The situation is, however, not one of all gloom and doom. One positive side-effect, according to a recent World Bank survey, was the increased availability of labour for agriculture. Government and private sector economists report a rise in the area under kharif cultivation this year, with the increase estimated in the 7-10 per cent range. With these trends, the possibility of inflation cooling a bit—something that has been seen since August—cannot be ruled out. If that happens, it will provide some respite to urban households that have borne the brunt of job and income losses.

Urban, salaried India is not free from its share of distress.

Anticipating economic hardship, the Centre had permitted withdrawals from the Employees Provident Fund (EPF) when relief measures were announced during the lockdown. Again, without much surprise, the data on EPF withdrawals were strongly correlated with states with high formal employment. But more distressingly, these withdrawals also tallied quite closely with states most ravaged by the coronavirus: of the Rs 39,402 crore withdrawn, Maharashtra (Rs 7,837 crore), Karnataka (Rs 5,743 crore) and Tamil Nadu (Rs 4,984 crore) were at the top.

Some of these concerns have found their way into the Government’s spending priorities as it tries to shore up the economy. In the first batch of supplementary demands for 2020-2021 presented to Parliament on August 14th, Finance Minister Nirmala Sitharaman asked for approval of an additional Rs 2.36 lakh crore. Of this sum, the actual outgo amounts to Rs 1.66 lakh crore while the remainder are savings (Rs 68,868 crore). Of the Rs 1.66 lakh crore, the lion’s share will be spent on rural India. An extra Rs 40,000 crore has been requested for spending under the Mahatma Gandhi National Rural Employment Guarantee Act. Another Rs 33,771 crore has been asked for direct benefit transfers. Of this, Rs 30,957 crore will go to women accountholders of the Pradhan Mantri Jan Dhan Yojna. The remainder will go to an old-age pension scheme.


First, there are states that have borne the brunt of revenue shortfall from weak GST collections. These states are clamouring for more as they battle the Covid-19 crisis. They need help. Second, there are now a large number of persons who have been left jobless. Helping them has been the first priority of the government

If these sums are meant to provide succour to people, money has also been made available to shore up the economic backbone of the country. States have been provided Rs 46,602 crore in the form of grants—the single biggest tranche of money in the supplementary demands—and another Rs 20,000 crore will be used to recapitalise public sector banks by sale of government securities.

These sums are tiny in comparison to what different parts of the economy want. States, on the frontline of the fight against the pandemic, have lost huge sums of money from losses due to inadequate revenue from the Goods and Services Tax (GST). Similarly, this round of bank recapitalisation is puny in contrast to previous ones. Could the Government have done better? Does higher spending offer a way out of the economic crisis?

In an interview to Cogencis, Union Expenditure Secretary TV Somanathan said: “Is it obvious from the experience of other countries which have given large packages that those packages had a direct correlation with staving off the GDP fall? There is no evidence of it. You can see Europe, you can see several other economies where very large packages were given, they have not really averted the downturn.” He added: “It is not clear to me that a fiscal stimulus will prevent loss of jobs or the shutting down of companies, if there is no demand. Because there is no package which we can give that can stimulate or make up for it… There is a limit to what government can do in a situation like this and we have to be realistic about it.”

At one level, what Somanathan said makes sense. There are limits to what the Government can do and there are many competing claims to the limited resources that are available to the Government. First, there are states that have borne the brunt of revenue shortfall from low GST collections. These states are clamouring for more as they battle the Covid-19 crisis. They need help. Second, there are now a large number of persons—both in informal and formal sectors—who have been left jobless. Helping them has been the first priority of the Government. So far, the expenditures incurred since March have clearly, and heavily, tilted towards these ends.

There is, however, a third—more intractable—problem at hand in India: its faltering economic growth. Here there are two peculiar problems since Covid-19 hit India. One, states that account for the bulk of India’s output—Maharashtra, Tamil Nadu, Karnataka and, only to a slightly lesser extent, Gujarat—have been ravaged by huge number of coronavirus cases. Over and above that is the massive economic dislocation prompted by the lockdowns that have been necessary to check the spread of the virus. Getting these states back on the rails is essential if economic growth were to pick up. Two, India is almost unique among countries when two parameters are considered: the extent of the downturn and the resources devoted towards
economic resuscitation. Here, the Government acted with caution when the outbreak began. At that time, the crisis along the Line of Actual Control (LAC) with China was not even on the radar (the first signs of that came in Galwan in mid-June).

Even on that early date, economists were unanimous in making a strong case for extraordinary expenditures. One can easily see the consequences in case the Government had undertaken a big stimulus, say around 10-15 per cent of GDP, and then the situation with China had deteriorated. The money necessary to wage a defensive war would have to be found by monetising the deficit and the consequent ruining of the economy due to inflation and re-allocation of resources. An economic crisis turning into a national security crisis is the worst nightmare that political managers in any country can face.

That doomsday scenario has not emerged. But given the needs of the armed forces—equipment, running expenses, war material, supplies—in case the situation turns worse, the Government has been wise not to spend more. But at some point, when the pandemic subsides, the issue of weak growth will have to be confronted. The original problem that weakened growth over the last decade—the clogging of land and labour markets—is still around even if some tentative steps have been taken by the Government towards labour reforms. In normal times, fixing this problem requires heavy political lifting. The 2013 land acquisition law is a case in point. Perhaps it is time to revisit these frictions in India’s political economy when the pandemic is over, or at least when it gets to a manageable level. At the moment, these reforms appear unnecessary as industry has no appetite for investment and finds itself unwinding its costs and debts. This situation, however, is unlikely to persist forever. At some point when demand picks up and investment seems promising, the Government should not be caught napping, having not done the preparatory work to undo these laws.

The immediate problem for the Government, however, is that of finding resources to meet multiple demands for money. One option—very often suggested in a cavalier fashion—is to opt for automatic deficit monetisation, a situation that prevailed prior to the 1998 arrangement between the Reserve Bank of India and the Union Government when issuing of ad hoc treasury bills was stopped. There are also suggestions that the inflation targeting approach has killed economic growth in India. These are extreme positions given that India has a history of inflationary pressures emerging very quickly.

Deficit monetisation remains a ‘nuclear option’ that the Government can exercise when it has run out of options. In an unprecedented crisis like the one India is witnessing now, that may become necessary if other options fail; it cannot be the first choice. There are downstream macroeconomic consequences of that option—crowding out of the private sector from financial markets, sustained inflation—that India has managed to overcome with great difficulty and over time. Many of these arguments are inspired by the current Western fashion—modern monetary theory—which holds that creation and borrowing of money has no consequences for governments. These claims should be taken with a pinch of salt in the Indian setting.