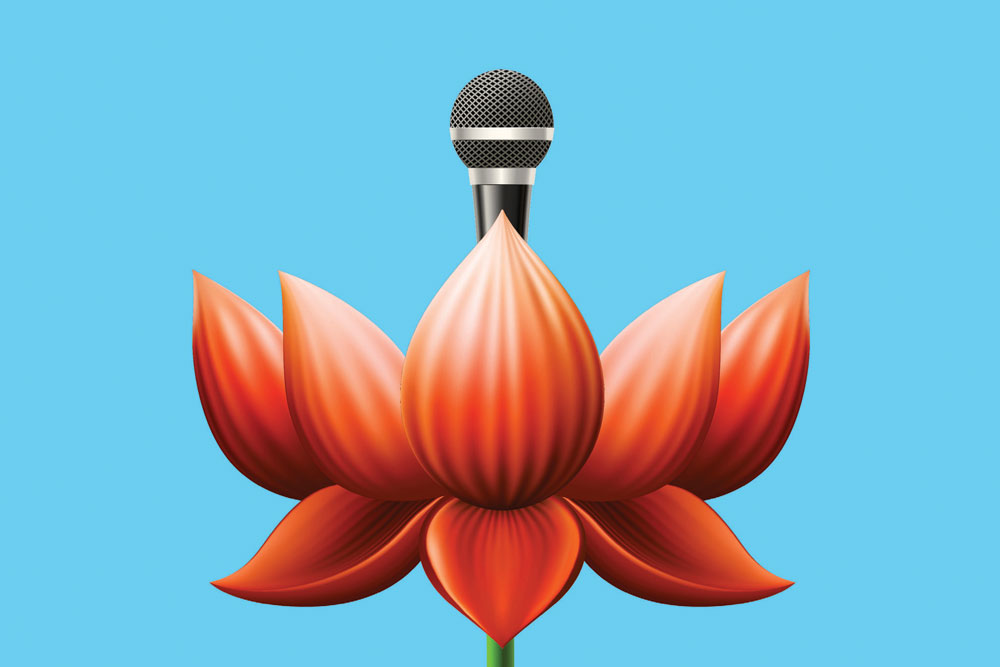 
ON JUNE 5, THE Bharatiya Janata Party (BJP) issued a concise but urgent statement that drew a sharp line for party functionaries, its Hindutva base, and the wider national and international audience. Leaving no room for ambiguity, the party said it respects all religions and strongly denounced insults to any personality of any religion. “During the thousands of years of the history of India, every religion has blossomed and flourished…BJP is strongly against any ideology which insults and demeans any sect or religion,” the party said, adding it is committed to a country where all are equal, willing to work for India’s unity, and are rightful claimants to the fruits of growth and development.

The four-paragraph statement came in the wake of a raging controversy over comments about Prophet Muhammad by BJP spokesperson Nupur Sharma and a Delhi unit functionary, Naveen Jindal. The comments on social media and during a heated and ill-tempered television discussion on the Gyanvapi issue led to a political storm. Following a brief lull, rioting broke out in Kanpur on June 3 after some Muslim groups sought to enforce a bandh in protest against the remarks about the Prophet. Soon, Gulf nations summoned Indian envoys, with Qatar calling for an apology. Thereafter, several Muslim nations and the Organisation of Islamic Cooperation issued condemnatory statements. The Indian embassy in Doha said the remarks of BJP functionaries do not reflect the government’s views and are viewpoints of “fringe elements”. The latter reference seemed a slip but the BJP statement left no room for doubt that the diktat applied to everyone in the party and clearly set out a public position on the matter. In off-the-record briefings, party leaders made it clear that the statement was well deliberated and not a knee-jerk or “damage control” measure.
Party officials in the know of developments said the June 5 statement and the decision to suspend Sharma’s membership and expel Jindal should serve as a cautionary tale for all in BJP. The action clearly indicated how the top BJP leadership felt about the issue and that further infractions were unlikely to be tolerated. The message for the more vocal and militant sections of the party’s support base was equally relevant: BJP would not endorse expectations that it would become a vehicle for far-right politics or views often expressed by Hindutva groups. “If someone thought BJP can mirror sectarian parties, that is not the case,” said a party functionary. The stance was also intended to counter opposition criticism that BJP hot heads had caused an international embarrassment and, more importantly, address adverse reactions of Muslim nations as well as concerns in other countries where apprehensions have been raised about the rights of minorities in India. In the days that followed the initial criticism by the Gulf and other nations, the Indian government renewed efforts to repair diplomatic rifts and quietly argue that comments and instances of communal violence did not amount to a systematic campaign against minorities or one that had the backing of the ruling party.

The government’s statements and BJP’s actions generated a vigorous backlash, most visible on social media, where saffron foot soldiers and prominent rightwing handles (with some notable exceptions) loudly lamented the disciplinary action announced by the party. The sentiment amounted to the view that the suspended BJP functionaries had been “thrown under the bus” for taking on political opponents who were equally disrespectful about Hindu sensitivities. The outrage of the Hindutva brigade was loud and deeply resentful. But BJP and the government seemed to have factored it in and did not deviate from the line they had articulated. The view in government is that sentiments spike and wane on social media and cannot become the benchmark for any action even as reactions on the internet are evaluated as a form of feedback. Social media is a difficult master to please but misconceptions about BJP’s stance on such issues had to be plainly set out. It was also felt that BJP spokespersons were increasingly drawn into TV debates where channels pit parties against one another with the aim of generating sensational content. It was almost as if party spokespersons were becoming props of anchors, and in the process, failing to articulate the party position. The violence in Kanpur was seen as proof of how indiscretions could play into the hands of communal mobilisers looking for an opportunity to stir mischief.


India has painstakingly built its ties with the Gulf states but the temptation to indulge in some grandstanding, as with Qatar, could be hard to resist. BJP and government statements are certainly intended to protect the gains made by Indian diplomacy and several visits by the prime minister to the Gulf, a breakthrough that has discomfited Pakistan

The role of Qatar in triggering the chain reaction of Muslim countries is being scrutinised as the demand for an apology from India and Assistant Foreign Minister Lolwah Al-Khater’s tweet accusing India of “systemic hate speech” targeting Islam came on June 6, a day after the BJP statement and action against Sharma and Jindal. The terse comments coincided with Vice President M Venkaiah Naidu’s presence in the wealthy Gulf state and in a pointed snub, his host for an official lunch cancelled at the last hour. Qatar has, for some time, looked to play a more assertive role in the Arab world and its decisions, such as playing host to the Taliban and facilitating the group’s talks with the US, are seen as a bid to gain a higher profile and even undercut Saudi Arabia. Qatar was a channel for finances funding the Islamic State and several of its citizens were sanctioned for activities supporting terrorism. India has painstakingly built its ties with the Gulf states in recent years, but the temptation to indulge in some grandstanding could be hard to resist. BJP and government statements are certainly intended to protect the gains made by Indian diplomacy and several visits of Prime Minister Narendra Modi to the Gulf, a breakthrough that has discomfited Pakistan. The criticism of India’s treatment of minorities has been raised by foreign ambassadors in their meetings with BJP President JP Nadda as part of a structured interaction, and the party chief has responded by arguing that no governance decision can be said to have discriminated against any section of society. The battle of narratives is, however, unlikely to settle any time soon as the political opposition and BJP critics constantly accuse the party of majoritarianism.

Though the furore over the televised remarks was the provocation for the BJP statement, it can also be seen in the context of RSS chief Mohan Bhagwat’s observations on the Gyanvapi controversy whereby he acknowledged the importance of the shrine and the temple for the Hindu faith but made it clear that a wholesale revision of alleged historical wrongs was not needed. “There is no need to look for a Shivling in every mosque,” he told an RSS gathering on June 3, adding that the contending claims over the Gyanvapi complex can be resolved by talks or in the court. His comments ruled out any fresh Ayodhya-type agitation over either the Gyanvapi or the Mathura Krishna Janmabhoomi disputes. The political jousting between BJP and its rivals is unlikely to be suddenly governed by the Queensberry Rules with neither side having a monopoly on polarising tactics. But BJP has drawn the line for its cadre and made it public as well.