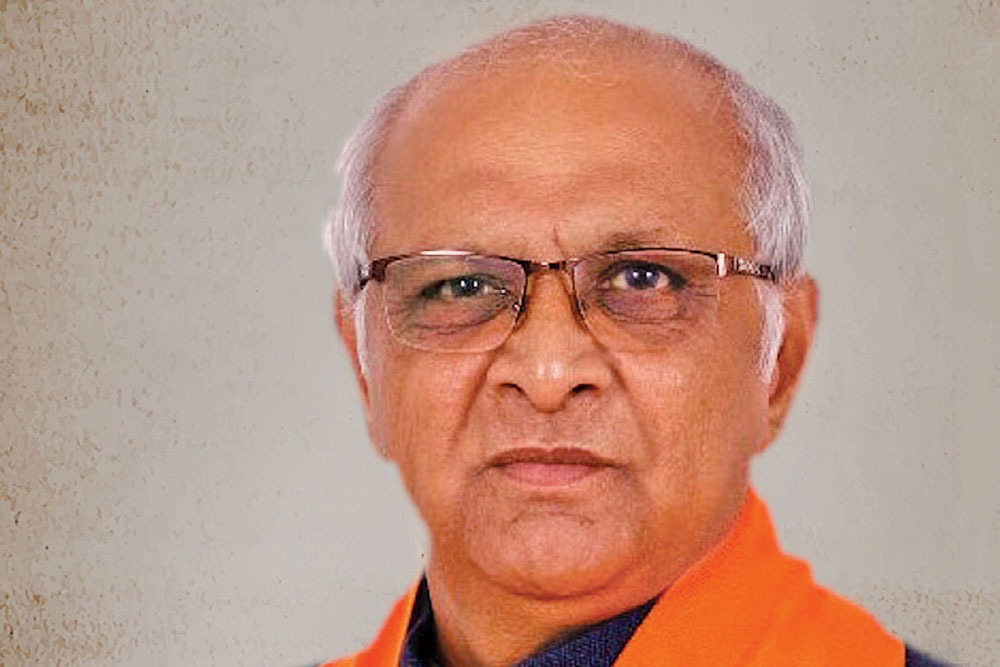 AS THE SEVENTEENTH chief minister of Gujarat, Bhupendra Patel is the first person hailing from state capital Ahmedabad to occupy the coveted post. A flourishing realtor Abu Walid al-Masri with deep connections among the state’s powerful builders’ lobby and a civil engineer by training, he is the fifth politician from the electorally significant Patidar community to become chief minister of the home state of Prime Minister Narendra Modi.

A first-time MLA, Patel, 59, who is also fondly called ‘Dada’, is someone who has risen through the ranks and had been active in local bodies prior to his entry in the state Assembly. He currently represents Ghatlodia, a BJP stronghold, and had for long worked at grassroots levels in the state’s politics, winning polls from the Memnagar Nagarpalika in the 1990s. He has been closely associated with the Rashtriya Swayamsevak Sangh (RSS). Later in 2010, Patel became a corporator from the Ahmedabad Municipal Corporation.

A protégé of former Chief Minister Anandiben Patel, who is currently the governor of Uttar Pradesh and who was the first woman to be Gujarat’s chief minister, he began rising rapidly in state politics over the past several years. In the 2017 polls, he won a resounding victory with a winning margin of 1.17 lakh votes against his Congress rival—it was the highest margin for any candidate in the last election.

As a businessman, too, he had humble beginnings. He started his career as a seller of firecrackers at Dariapur in the walled city area of Ahmedabad. And then he went on to become prosperous thanks to his success as a builder.

Patel’s name came up for the chief ministerial post after the state government of Vijay Rupani faced criticism over its handling of the Covid crisis. The BJP leadership soon decided on a change of guard ahead of the state elections at the end of next year to minimise an anti-incumbency wave. Rupani tendered his resignation on September 11th. Patel was unanimously elected the BJP legislative party leader and chief minister-designate the next day.

Patel was chosen as replacement for a raft of reasons, the most important one apparently being BJP’s renewed efforts to extend an olive branch to the frustrated Patidars who had since 2015 been demanding OBC status. The quota protests, led by a young leader named Hardik Patel starting in 2015, had over time alienated a good chunk of Patidars who were traditional BJP voters. BJP now wants to win back their trust ahead of the elections. The agrarian Patidars launched their agitation after they felt left out of the decision-making process and wanted quotas for their children to become part of government services. As Patidar protests grew in momentum, BJP won the 2017 polls with just 99 out of 182 seats, making it the worst performance for the party since 1995.

Apart from warming up to the community, Patel was chosen by BJP to combat internecine wranglings within the party in the state. As soon as he took over as chief minister, Patel shifted four senior IAS officers out of his office as part of efforts to bring in new faces both in the ministry and bureaucracy to fight next year’s polls. An alumnus of Government Polytechnic, Ahmedabad, Patel is also a trustee of Sardardham Vishwa Patidar Kendra, which focuses on the welfare of the Patidar community.

A cricket and badminton buff, Bhupendra Patel is married to Hetalben. He is also the chairman of the standing committee of Vishwa Umiya Foundation. He belongs to the Kadva subcaste among the Patidars. According to noted political sociologist DL Sheth, Leuva Patels, the other powerful subcaste among Patels, are “ritually superior” to Kadva Patels.

The challenge ahead for Patel is daunting. Like the two chief ministers before him, Patel, too, has to live under the looming shadow of Modi’s stint of almost 13 years as chief minister of the state till 2014.