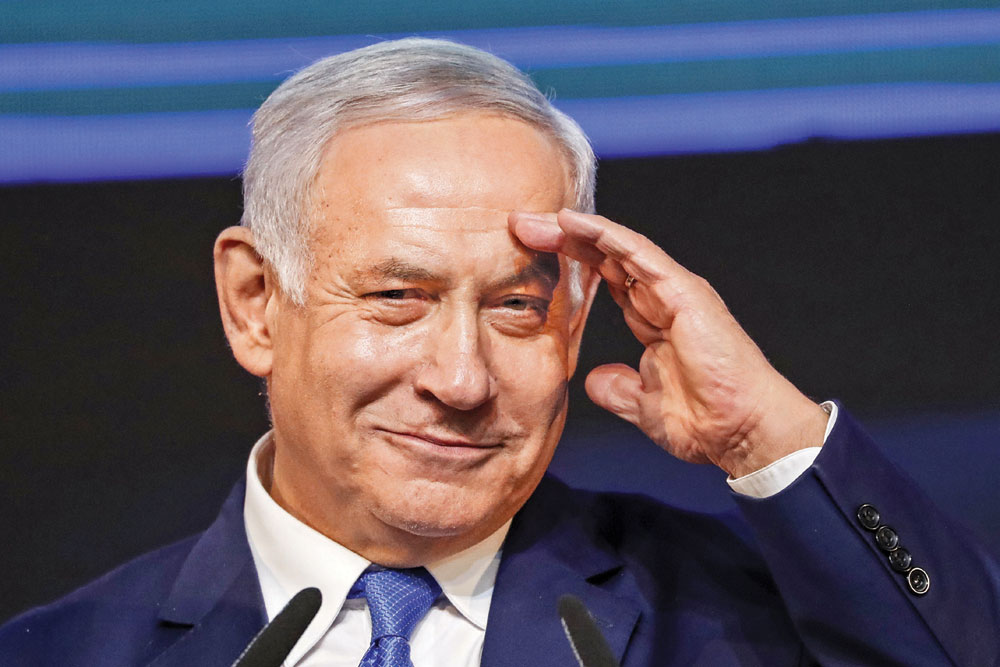 
THE ELECTION CAMPAIGN said it all. Benjamin Netanyahu had refused to share the stage with Itamar Ben-Gvir, an extremist recently filmed brandishing a gun at Palestinians during a clash. A relative newcomer but also the rising star of Israeli politics, Ben-Gvir has been convicted of being a racist. Racist parties were banned by law in Israel following the sordid saga of Meir Kahane in the 1980s when his Kach, founded in 1971, had won its first—Kahane himself—seat in the Knesset in 1984. Kahane had plotted to blow up the Libyan embassy in Brussels in revenge for the 1972 Munich massacre. Israel’s Central Election Commission had banned him but that ban was overturned by the Supreme Court, forcing the Knesset to pass a law preventing racist parties from contesting elections. Kahane, designated a terrorist by the US (he was assassinated in New York in 1990), was boycotted across the aisle but could have done lasting damage had he been able to campaign in 1988 against the backdrop of the First Intifada.

Ben-Gvir, who desperately wants to be Israel’s new minister of public security, considers himself a disciple of Kahane and used to chant “Death to Arabs” till the other day, only modifying the mantra to “Death to Terrorists” to ‘sanitise’ his image before the November 1 polls which seem to have restored stability to Israeli politics after the 2019-22 crisis that has seen five elections in four years. But ‘King Bibi’ cannot avoid him any longer as the November 9 coalition talks proved. After the talks, Ben-Gvir said that “a full, full right-wing government” was on its way. That isn’t quite correct since Ben-Gvir, who heads the Otzma Yehudit party, and his current boss Bezalel Smotrich, who leads the Religious Zionist umbrella bloc and wants to be defence minister, are far-right politicians who want every piece of the cake they can get for making up the numbers for the Likud-led government in the 120-member Knesset.

Perhaps Netanyahu will find a way to govern. But always at a price. The man who overtook David Ben-Gurion in 2019 to become Israel’s longest-serving prime minister may find his room for manoeuvre constricted, given how he needs his new partners’ help to amend the law to protect himself against the investigation for corruption, an ignominy he had to suffer while still in office. But here’s also a man who had restored leadership to big status in the post-Ariel Sharon and post-Yasser Arafat era when both Israelis and Palestinians were making do with weak leaders. The Palestinians never recovered. Israel saw a booming economy which Bibi, with help from Stanley Fischer at the Bank of Israel, guided through the post-Lehman global recession.

Security had markedly improved with the advent of the Iron Dome and the pounding of Gaza as well as Netanyahu’s relentless pressure on Iran, daring to stand up to Barack Obama through his nuclear deal. He had outlasted the two Obama terms to find Donald Trump, and the Abraham Accords with Gulf Arab states became the crowning glory of Israeli diplomacy that fundamentally altered the geopolitical reality of the Middle East. The man whose brother, Jonathan, became a national legend after his death during the Entebbe rescue operation in 1976 and was himself a captain in the elite Sayeret Matkal commando unit knows a thing or two about security. As he returns, he will have to deal with the Biden administration-midwifed maritime deal with Lebanon which, from an Israeli perspective, advantages Iran and its proxy Hezbollah. He is likely to move closer to the Saudis who share much the same concerns about Iran and have blessed the Abraham Accords.

A good friend of Narendra Modi, who became the first Indian prime minister to make a state visit to Israel, Netanyahu was heartily welcomed back by New Delhi but the decade-long deepening of ties under Bibi had not paused at all in the Bennett-Lapid year, showing how far India and Israel have travelled together in the last 30 years. Except for the fact that one doesn’t know what exactly Congress, in much the same state as Israel’s once-mighty Labor, thinks or feels today about a partnership on which there used to be bipartisan consensus in Delhi. Perhaps a new state visit by Netanyahu or Modi would be the perfect test?