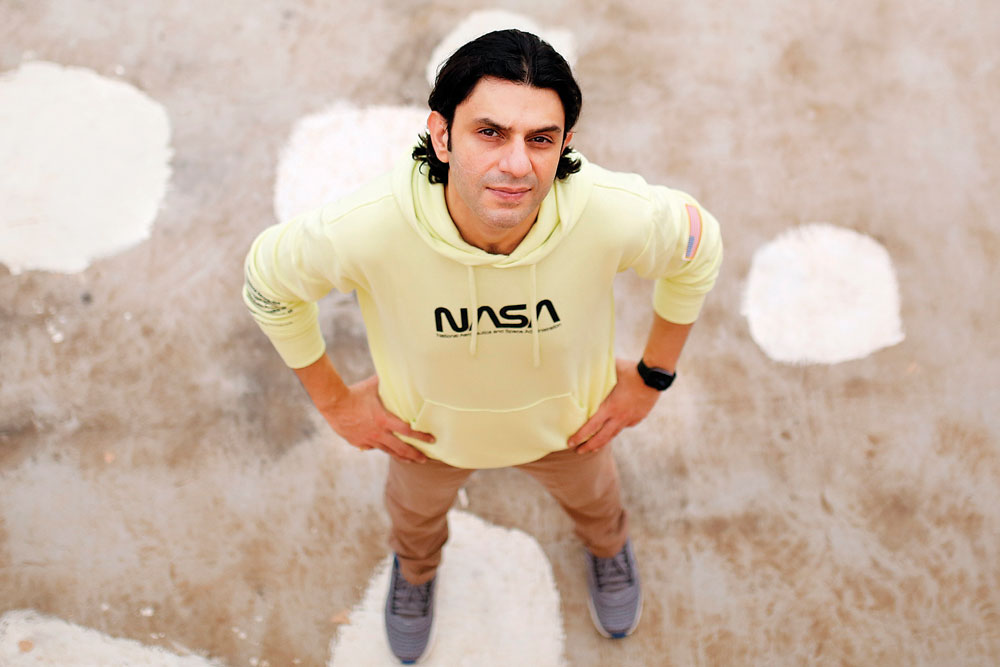 
AT THE AGE OF 10 when he visited a film set in Mumbai for the first time, Arjun Mathur knew it was to be his second home. The cameras, the clap board, the call to action, the song and dance—it all made him feel like he belonged there. Here was the classic outsider with no connections to the film industry; just a wide-eyed kid spellbound by the magic of the movie world. “I always knew this was what I wanted,” says Mathur who as a teenager wrote an email to his dad explaining why he didn’t see the point in going to college, when all he wanted was to be an actor. It’s been almost three decades since that dream took birth, and 13 years since Mathur began his career in Hindi cinema, and today he is one of the rare Indian actors nominated at the International Emmy Awards. In a simple, quiet, well-decorated apartment that he shares with his partner Tiya Tejpal, Mathur seems unaffected by his recent success.

“It is a big deal, right?” he asks almost as though the information is still sinking in. “Honestly, in my head I don’t know how big it is. These 13 years have also jaded me a little bit, so I’ve just learnt to temper my excitement, expectation, emotion, everything. What makes it so real is my family, my friends and how big it is for India apparently. That’s how I am coming to accept that this is quite an achievement. Maybe I also have a difficult time patting my own back too much,” he says trying to embrace the overwhelming amount of media attention he’s received in the last few weeks.

As the wedding planner and gay activist Karan Mehra in the web series Made in Heaven, Mathur delivered a mature, sincere and, some would say, even pathbreaking performance. It was a show that broke many boundaries, called out double standards and deep-rooted patriarchy within Indian society and stood up for the rights of the gay community. As the protagonist, Mathur portrayed a troubled gay man who on the one hand is developing his career and, on the other, he’s embittered with his family about his sexual identity. He not just normalised his identity, but did so with immense grace. He translated the pain of an individual who for years has had to live a dual life and hide his identity. Mathur never played the victim. After watching the show, you almost wonder why we haven’t seen more of Mathur.

“Made in Heaven is almost like coming full circle for me. I started my career playing a boy who was also gay in Mira Nair’s short film Migration (2008) where I played Irrfan Khan’s lover. And now 12 years since that film I found Made in Heaven. When I read the show I knew it was pathbreaking in its own right. How many times do we think of the social implications of our films anyway, despite the fact that cinema has so much power to change mindsets? I was getting to be part of a show that had a real voice. The stance it took against misogyny and discrimination towards individuals and gender resonated with me strongly. Karan, his complexities, his warmth, his awkwardness around his father, these were all very real aspects of an individual’s mind which I have been through myself and hence found it very cathartic to perform,” says Mathur for whom the show was the ideal opportunity to prove himself as an actor.


I was naïve about how the industry functions, and just being a good actor wasn’t enough. There are so many factors at play when it comes to getting picked for a part, and it took me a while to realise that, says Arjun Mathur, actor

Despite the fact that Mathur has over 33 films to his credit, his career trajectory is anything but that of a conventional Hindi film hero. We knew who he was, we remembered his performances, but he never became a household name. He worked with everyone from Mira Nair and Zoya Akhtar to Karan Johar in the first few years of his career, but despite doing heartfelt work film after film, the big break evaded him. As an assistant director on big-budget films such as Rang De Basanti (2006), Mangal Pandey: The Rising (2005) and Bunty Aur Babli (2005), Mathur had learnt the ropes of running a set and the gruelling work that goes behind creating cinema at the start of his career. His perspective towards filmmaking, his love for the medium and the various aspects of it were sharpened by the dust on a film set. However, when he started gunning for roles, he saw that not everyone wanted to cast a new face as a protagonist. No matter how good he was. “I still remember how Mira Nair tapped on my shoulder when I was buying popcorn at a movie hall during the interval of her film The Namesake. I’d auditioned for her short film just a couple of days before that and she said to me, ‘You’re Arjun Mathur, right? I loved your audition but you’re too young to play Irrfan’s lover.’ I was shaking in my boots then. Mira Nair had loved my performance! I didn’t even care if I didn’t get the part. But a few days later they called me and offered me the role anyway.”

It was a part where Mathur stood alongside Irrfan Khan, one of India’s finest actors. “But even after doing some very good roles, nobody wanted to cast me as the lead. I once auditioned with another actor who was from a star family and the producer called and said he couldn’t cast me because I was way better,” he says. When Luck by Chance (2009) was in production for years together and no leading man wanted to play a protagonist with grey shades, Mathur sat down for an informal reading of the part with Zoya Akhtar. Eventually Farhan Akhtar went on to do it. But it was Mathur’s Abhimanyu Singh, Farhan’s often bitter, heartbroken friend who stood out in the talented ensemble. He took all of that insecurity he felt about not playing the leading man and used it in his performance. “When I read that script, I felt like it was my life story playing out. It was almost like you wanted something so badly, but you get offered the smaller part. Not that I regret playing the friend and I will always be thankful to Zoya for being by my side always. After that film was out Zoya would always tell me that she owed me. But the fact is that I was naïve about how the industry functions, and just being a good actor wasn’t enough. There are so many factors at play when it comes to getting picked for a part, and it took me a while to realise that.”

HE SMIRKS AND throws his head back when I talk about the nepotism debate today. Almost like he’s seen it all. “It’s all true, but it’s every individual’s battle and all battles are different,” he says, adding, “After doing My Name is Khan when I met Karan [Johar] he said I had everything to be a lead actor. But the market wouldn’t allow him to cast me as one.” Mathur has done films such as Coffee Bloom (2015), Ankur Arora Murder Case (2013) and Angry Indian Goddesses (2015), but few scripts stood up to the kind of versatility he was capable of. “There was a time I used to stick my finger up at Bollywood a lot, back when being offensive on social media was not a big deal. But now I feel differently. I was desperately trying to fit myself in then, but today I’m content with who I am, no matter what the norm says. My journey has been full of heartbreaks and some surprises and some projects filled with pure joy, and I feel elated with these experiences. But now I also know that any fame that I conquer, it’ll eventually change,” he says.

Among all of this what remained constant was how honestly he performed his roles. The pain and the anger, the passion and the love—all of which he credits to his mother whom he lost when he was 13. An experience that defined him and his family. “My mother suddenly passed away in a car accident in Mumbai. When you’re that young, and you lose your rooting, it’s very, very difficult. That feeling of being safe and secure in this universe, your connection to all things in life, all just vanished in a span of minutes.” The experience made many things out of him, and the following teenage years were understandably hard. “My dad was left with three teenage kids and that of course led to a lot of friction in those years. I started feeling fearful of my dad. Fear as an emotion, if it’s so prevalent in your formative years it affects your worldview and how you are in your adult life. Overall, by the time I came out of it, I came out pretty angry, rebellious. Confident yet underconfident. Confident about my craft but not too confident about being good enough in life.” He channelled his angst into drama during his schooling years in Delhi. “I was about a 100 kg then because with everything I was dealing, I developed an eating disorder. I was a smart kid but I had a problem with authority and I couldn’t wait to get out of school!”

Today I’m content with who I am, no matter what the norm says. My journey has been full of heartbreaks and some surprises and some projects filled with pure joy, and I feel elated with these experiences, says Arjun Mathur

It was much later during his training at The Lee Strasberg Theatre and Film Institute in New York where he got a chance to release his pent-up childhood trauma. “The beauty of acting is that I try to find the pain again and again in my performances, but once I’ve dealt with it, drawing from those memories isn’t so painful now. Today, my mom is who I have been thinking about the most and whatever is happening is no more than her looking out for me. Also, the other day, my dad, who’d always wonder why I wasn’t doing commercial cinema, came on a Zoom call and said he loved me and he was proud of me. For the first time in his life,” says Mathur.

The advent of OTT has been a boon for actors such as him who are finally receiving stories and characters that are worth their while. The International Emmy awards will be held on November 23rd and though Mathur may not make it to the ceremony physically, he’s happy to stand tall with fine co-nominees.

“The Zen space is the only place I really want to be right now. This is not the first or last time there’s going to be an ebb and flow in life. It’s fleeting. The joy and excitement will last and then pass. I don’t know if there is a big film or show or another award tomorrow, and that’s OK. If anything, what these experiences have done for me is made me even more secure, comfortable with the pace of my journey, and I want to stay balanced in it.”