Who better than the grand patriarch of Bollywood to make caste visible and audible in his new film? 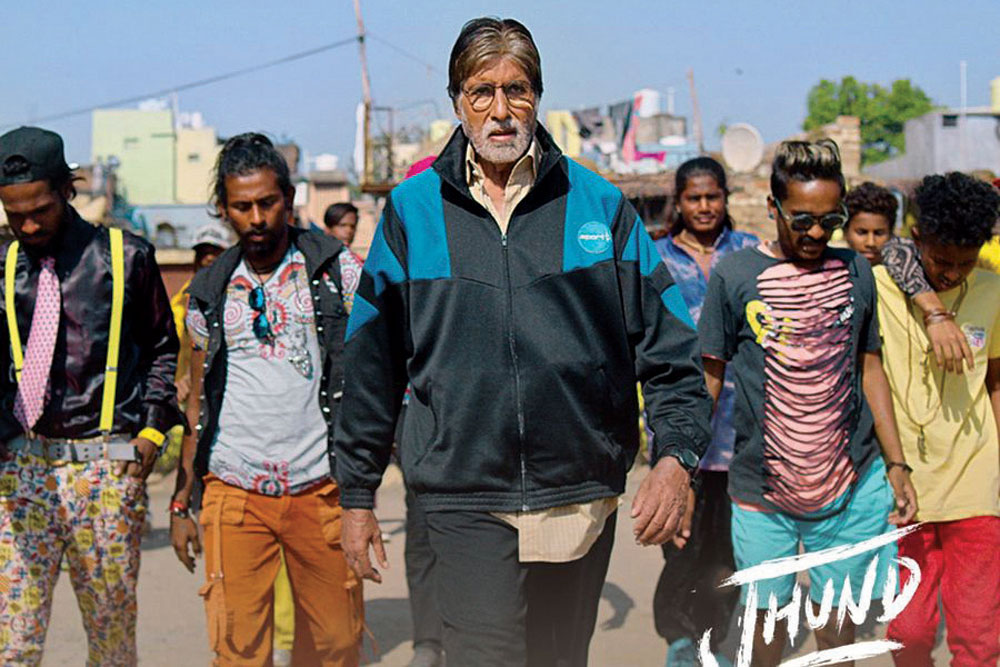 IT CAN’T BE EASY being Amitabh Bachchan in a country routinely given to reverence. Whether it is the government’s Swachh Bharat Mission or a director’s committed vision, he is supposed to embody both. Most nights, he is on TV asking general knowledge questions to squealing fans and respectful celebrities. Otherwise, he is routinely pushing products ranging from banking services to country expos. And yes, occasionally, he appears on the big screen reminding us once again of why he is called a legend.

So, no surprise then when Nagraj Manjule, one of India’s most intense directors, wants to cross the wall between Marathi and mainstream cinema—much like the wall in the film dividing the upmarket school from the slum—he uses Bachchan’s persona to carry his message. In his new film Jhund, Bachchan plays a school teacher who wants to create a football team out of children of the slum, most of them addicted to cheap drugs, given to stealing, and forced to do backbreaking work in the dark economy. “Apna to sadak ashiana hai/Aur footpath mast naram naram takiya hai/Khula aasmaan shamiana hai/The street is our bed, the footpath our pillow and the sky is our roof),” reads the lyrics of one song.

Bachchan plays yet another Vijay in a long line of Vijays. Sometimes his Vijay is rebellion personified as in Deewaar (1975), sometimes he is seething with silent rage in Trishul (1978), and at other times, he is blinded by revenge as in Agneepath (1990). In Jhund, as Vijay Barse, he is uplifted by the talent he sees among the youngsters in the slum. Regardless of the school management which is uncomfortable with the “filth” he is bringing into the school, Vijay persists with his project and transforms the youngsters from a jhund (horde) to a winning team. It takes practice, perseverance and patience. It takes years to wean them off one habit and make them adjust to new ways. But they finally do.

There is an added thrill here, to see the man who once embodied the entitled Nehru-Gandhi era and then subsequently was one of the first to recognise the rising power of Narendra Modi in Gujarat, bowing to a gigantic photograph of BR Ambedkar. Manjule, a Dalit himself, has made highly regarded and heartbreaking Marathi films, Fandry (2013) and Sairat (2016). He believes caste is the most fundamental truth about Indian society and cannot be escaped. It is a reality that Bollywood movies are only now coming to terms with—the Dravidian movement in the south has made it a greater reality in Tamil movies. Who better than the grand patriarch of Hindi cinema to restore Ambedkar to his rightful position in the secular national pantheon? We exist as a democratic republic which espouses equality in large part thanks to him, and the Ambedkar Jayanti celebrations seen in the film establish this firmly. A bow from Bachchan seals the deal.

‘Hum ko duniya ne roz dekha hai/phir bhi undekha jhund hai/The world sees us every day, and yet, we are invisible,’ says a song. ‘Apun ki basti gutter main hai/par tumhare dil main gandh hai/Our slum is in the gutter but your hearts are full of filth,’ it goes on. Much like Neeraj Ghaywan’s film Masaan (2015) and his short Geeli Pucchi (2021), Jhund puts the Dalit front and centre of the narrative, though it uses Bachchan’s unique star power to become audible. We’ve had sport films before that have been beloved, Lagaan (2001) and Chak De! India (2007), but Bachchan’s football coach is more than a mere mentor of the game. He has been elevated to national guide and country coach. In his 80th year and his 53rd year in the film industry, Jhund is an additional jewel in a shining filmography that shows the spectrum of a life well lived and full of fine performances.