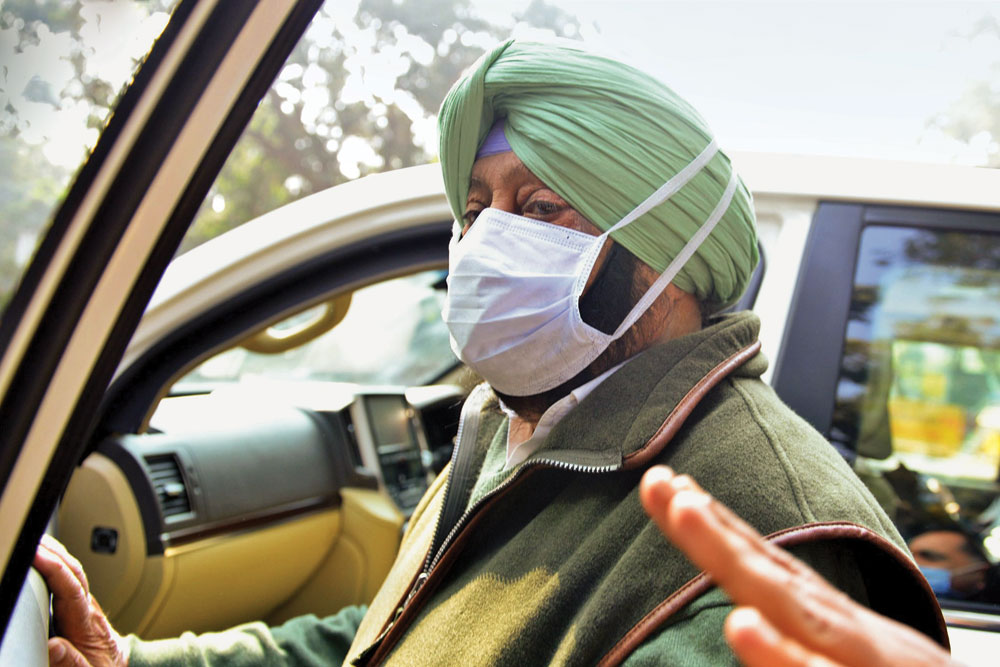 
AT 79, PUNJAB CHIEF MINISTER Amarinder Singh has seen it all—dissent within Congress in the state, fingers being pointed at his capability, the warmth of the Gandhi family as well as its iciness.

When Singh landed in the national capital recently to appear before a three-member party panel to present his side of the story, he would have gone down memory lane, recalling a past of turf wars within Congress that has replayed itself. But the last time the Punjab Congress was in the throes of factionalism, he had directly approached the Gandhi family. At that time, Singh, who had lost the 2012 Punjab Assembly election and won the Amritsar Lok Sabha seat defeating late BJP leader Arun Jaitley in 2014, was claiming the post of Punjab Pradesh Congress Committee (PCC) chief, held then by Partap Singh Bajwa.

“Amarinder Singh, who had enjoyed a very cordial relationship with Sonia Gandhi, suddenly felt cold-shouldered by the Gandhi family. Rahul Gandhi, the Congress vice president, whom Amarinder Singh would frequently take out for outings whenever he visited Doon School to meet his son Raninder, was adamant that he would not consider the case of his father’s friend. Even though Sonia Gandhi was open to bringing back Amarinder Singh at the helm in Punjab, Rahul Gandhi was in no mood to take away the baton from Partap Singh Bajwa’s hand,” writes Khushwant Singh in his biography Captain Amarinder Singh: The People’s Maharaja (2017). In November 2015, after several meetings, with the grapevine abuzz that he was being offered a switch to the Bharatiya Janata Party (BJP) and with a chill in relations with the Gandhis, the party leadership gave in, making him state party chief for the third time.

This time round, less than eight months before the next Assembly election, there are more players and new issues in the face-off between Singh and his detractors. The voices against him grew louder after the Punjab and Haryana High Court quashed a Punjab Police Special Investigation Team (SIT) probe of cases relating to the 2015 Kotkapura police firing during a protest against the desecration of the Sikh religious text in Faridkot. Bajwa, his old bête noir, and cricketer-turned politician Navjot Singh Sidhu, who had quit BJP and joined Congress because he was piqued at having to give up contesting the Amritsar Lok Sabha seat for Jaitley, wasted no time in accusing Singh of protecting the Shiromani Akali Dal’s Badals. A close associate of Singh says that when he asked him about these allegations, Singh calmly responded that Badal and he were fighting for the same seat and it did not make political sense to help his biggest adversary.


Bajwa has claimed that a majority of party leaders want action against the Badals in the sacrilege case within a month. The state government set up an SIT to look into the Kotkapura firing, a move that failed to mollify the dissidents. Whether the Congress leadership’s move to set up a three-member panel to look into the complaints of the MLAs and other leaders against the chief minister was eyewash or meant to tame him, Singh played along, accepting the organisational hierarchy. But the optics of the party’s tallest leader in the state appearing before the three veterans—Mallikarjun Kharge, leader of opposition in Rajya Sabha; AICC in-charge of Punjab Harish Rawat, former chief minister of Uttarakhand, which is also going for elections along with Punjab next year; and former MP JP Aggarwal—was bound to amplify publicly the discord in the party and the rancour against the chief minister. In the end, Singh is likely to have his way, again.

Partap Singh Bajwa and Navjot Singh Sidhu wasted no time in accusing Amarinder Singh of protecting the Badals. The Chief Minister’s appearance before the inquiry panel was bound to publicly amplify the discord in the Punjab Congress

After he placed his cards before the panel at a three-hour meeting at the AICC headquarters on Akbar Road, Singh just said party matters were discussed ahead of the election. The MLAs who appeared before the committee had other grouses, like the chief minister’s inaccessibility. Those who have known Singh, the son of the last maharaja of Patiala, say that’s the way he is and it has always been an issue. But the meetings did not throw up a new name for the party’s face in Punjab in 2022. In the absence of a succession plan and reluctant to antagonise Singh, Congress is, as of now, banking on him—in a state it wrested after a decade from the Akali Dal-BJP combine in 2017 at a time when the Modi wave swept other states, including Uttar Pradesh (UP).

The leadership dilemma has been haunting Congress even in New Delhi, where it is yet to find a replacement for Rahul Gandhi, two years after he stepped down as party president. Former party leader Jitin Prasada, who quit Congress to join BJP on June 9th, was among the signatories in the letter to the Congress high command demanding a full-time president. It was seen as a move against the Gandhi family. A former MP from UP’s Dhaurahra constituency, the 47-year-old former minister’s desertion comes just months before the state goes to the polls along with Punjab.

The meetings did not throw up a new name for the party’s face in Punjab in 2022. In the absence of a succession plan and reluctant to antagonise Singh, Congress is, as of now, banking on him

SINGH IS UNDERSTOOD to have conveyed his disapproval of Sidhu getting a bigger role, either as deputy chief minister or PCC chief. Sidhu, an MLA, is apparently relying on his celebrity status and proximity to Rahul and Priyanka Gandhi. The party would likely resist having a Sikh Jat in two top posts—chief minister and PCC chief. The last word on the crisis that has engulfed the party in Punjab, one of the six states where Congress is in power, has been left to the Gandhis.

Singh has never shown disrespect to the Gandhis nor has he held back from defying the Congress high command, whether it was his resignation over Operation Blue Star when Indira Gandhi was prime minister in 1984, or the Punjab Termination of Waters Agreement Act, 2004, ignoring Manmohan Singh who was then prime minister and Sonia Gandhi who was party president, or appointing election strategist Prashant Kishor, who had by then become persona non grata in the party, without consulting Rahul or Priyanka Gandhi. Paradoxically, it was some of these instances of defiance that endeared him to his state, making him indispensable for the Congress leadership.

According to Pramod Kumar, director at the Institute for Development and Communication, Chandigarh, the anti-incumbency and dissent against Singh would hurt Congress in the 2022 election. “The factionalism is the outcome of non-performance. Who will come to power I don’t know. There is no scope for exclusive politics in Punjab, where cultural divisions are blurred. If BJP thinks it can repeat a Haryana, it will lose,” he says.

Though Sikh Jats have ruled the state, with the last non-Jat chief minister being Congress’ Zail Singh in the 1970s, it is Dalits, constituting nearly 32 per cent of the population, and Punjabi Hindus who decide the outcome. Kumar says between 1966 and 2012, 44 per cent of MLAs were from the rural Jat peasants, while 25 per cent were Dalits, 9 per cent OBCs and 22 per cent were Khatris (urban traders): “In Punjab, Dalits have representation in all parties. The Dalit in Punjab is not manuvad and the Bahujan Samaj Party (BSP) has been unable to capture the regional, cultural and economic specifications in view of the role of Sikhism and the Arya Samaj in liberating Dalits from stringent behavioural patterns. That’s why Mayawati had a limited appeal.” BSP’s vote share had fallen from 15 per cent in the 1991 Lok Sabha polls to 1.9 per cent in the 2014 Lok Sabha polls and to 1.5 per cent in the 2017 Assembly polls, in a state where Dalits influence 30-35 of the 117 Assembly seats. In 2019, however, it rose to 3.49 per cent. BSP founder Kanshi Ram, who was born to a Dalit family of Ravidasia Sikhs in Ropar district, had won from Hoshiarpur in the state in 1996.

The leadership dilemma has been haunting Congress even in New Delhi. Jitin Prasada, who joined BJP on June 9th, was among the signatories in the letter to the Congress high command demanding a full-time president. Prasada’s desertion comes just months before Uttar Pradesh goes to the polls along with Punjab

The Kharge panel has got wind of BJP trying to get on board Dalits from Congress, promising top posts. Dalit leaders in Congress are hoping that it would push Congress to grant them more political clout in a party which has been Jat-led like Akali Dal. BJP, with which Akali Dal parted in September 2020, after a 24-year-long alliance, over the farm laws and what it described as “continued insensitivity to Punjabi and Sikh issues”, is yet to find a foothold in the state. With Akali Dal’s Harsimrat Kaur Badal quitting, the sole Sikh in Narendra Modi’s Government is Hardeep Singh Puri, a former diplomat, who was re-elected to Rajya Sabha from UP after he lost the Amritsar Lok Sabha seat to Congress’ Gurjeet Singh Aujla in 2019. With 10 per cent vote share and two MLAs in Punjab, BJP has a long way to go, bolstering Congress’ hopes of getting a second term.

The ire of farmers who, after the wheat harvest that yielded a record production this year, got back to agitating against the three farm laws is directed at the BJP-led Modi Government.

Kumar, however, is of the view that the movement was unlikely to have a decisive influence in the Assembly election although it has impacted the state’s politics. “The farmers’ movement has questioned BJP’s politics in Punjab. It has pushed BJP to the margins and even Akali Dal broke off from their alliance. No political party has been allowed to participate in the movement and these parties have extended full support to it from outside,” he says.

In what is set to be a four-cornered contest in the state with Congress, Akali Dal, BJP and the Aam Aadmi Party (AAP), all the parties barring BJP are hoping to cash in on the agitation. Last year, at the peak of the protests, Rahul Gandhi took out a tractor rally against the farm laws from Punjab to Haryana. In mid-February this year, Congress won 98 of 109 municipal councils and nagar panchayats and seven of eight municipal corporations, despite the fact that the notes of discord and criticism of the chief minister within the party had started surfacing last year.

For the Congress leadership, this is not the first time that it is dealing with demands for Singh’s ouster as chief minister. In 2003, the state’s first woman chief minister and Congress leader, Rajinder Kaur Bhattal, was backed by several MLAs in her demand for unseating Singh. The issue was resolved after Sonia Gandhi, then the party chief, stepped in and offered Bhattal the position of deputy chief minister.

Singh had said that 2017 would be his last election. But Captain, as he is called because of his time in the army, is in no mood to hang up his political boots as he fights his enemies within Congress and outside.