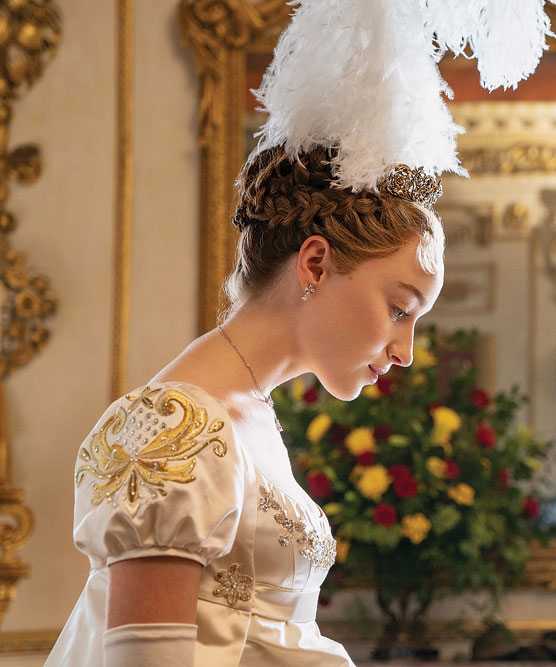 
MOST good TV pilots have a centerpiece scene early in the episode, a sequence that demonstrates not only the core concerns but also the preferred tonality of the show. For the recent Netflix romance Bridgerton (based on Julia Quinn’s eponymous series of novels set in Regency-era England), that centerpiece scene happens when our protagonist, the eldest Bridgerton daughter Daphne (Phoebe Dynevor), starts receiving suitors over tea and biscuits under the watchful eye of her mother. Only the previous day, she had made a triumphant social debut (circa 1813 London) in front of the Queen, who praised her effusively. So, many interested parties are expected at the Bridgerton house.

Over at the Featherington residence, Miss Marina Thompson (Ruby Barker), a cousin to the Featherington sisters, finds herself fielding admirers all day. The comedic hijinks that happen at both of these sites are well-trodden ground but enjoyable all the same: the suitor who’s trying too hard, the suitor who comes with an over-the-top floral arrangement, the bumbling, gluttonous suitor who seems more interested in the biscuits. Giggling siblings and tightly wound-up mothers complete the picture. The final touch is the moment you realise what the background music is—a playful orchestral version of Maroon Five and Cardi B’s ‘Girls Like You’ (orchestral versions of hits by Billie Eilish and Taylor Swift, among others, echo throughout the series).

The music and the way it’s used here are the final clues for what this show aims to be: an exemplar of refined escapism, a 19th-century fantasy designed explicitly for the Netflix generation. For the most part, Bridgerton achieves that aim. The show is also a good advertisement for the literary genre it both embraces and, in some ways, updates the Regency romance.

A subset of the historical romance, Regency romances are set in British high society during the early 19th century, including the 1811-1820 period when King George III’s son ruled as his proxy, as prince regent. There are certain shared aspects to most Regency romances, perhaps the most important of which is the ‘ton’, derived from the French phrase ‘le bon ton’ which means ‘good manners’. ‘Ton’ refers to the set of etiquettes and appropriate behaviours agreed upon by members of British aristocracy and high society in general. What clothes to wear and when, who to greet (conversely, who to ignore) and how, what manner of conversation was appropriate and so on.

YOUNG PEOPLE IN Regency romances are frequently worried about breaching these protocols and the resulting loss of social standing. Women feel the impact of real or perceived breaches more so than men. The fashionable young men of the era shoot, swim, fence, ride horses and sometimes, brag about these exploits in their clubhouses (or the tavern, if they were prone to rubbing shoulders with disreputable sorts). For women picking a suitable husband (therefore, securing a stable income) becomes the driving point of many stories; this is, after all the early 19th century. Parties and gossip fuel the people on view.


Bridgerton aims to be an exemplar of refined escapism, a 19th century fantasy designed explicitly for the Netflix generation

A good Regency romance, however, depends less on plot machinations (welcome as they might be) than they do on the frisson generated by well-written dialogue. As with all romantic comedy, wit and romance begin to look a lot like each other as the story progresses. And while these formal features have more than a whiff of Pride and Prejudice (1813), the Regency romance was practically invented by a different, latter-day British author: Georgette Heyer (1902-1974).

Heyer wrote over 50 novels in her lifetime, starting with the Georgian-era romance The Black Moth (1921), published when she was 19. Throughout the 1930s and 40s, she enjoyed an ever-increasing global fan base, averaging one romance and one detective novel every year. This was the era when Heyer more or less established Regency romance—novels like An Infamous Army (1937), The Spanish Bride (1940) and Friday’s Child (1944) are considered among her best works from this period.

A good Heyer novel has strong characterisation, dialogue and a high degree of historical accuracy. They’re also quite funny, even though Heyer believed sarcasm is the highest form of humour. Most of her women tend to be shy, submissive and ‘virtuous’—or very ‘rebellious’. They either accepted their limited agency in the world, or couldn’t stop obsessing about it for longer than a page or two. Her male protagonists followed either the ‘rake’ (rude, headstrong, dangerous) or the ‘debonair’ (the well-heeled, silver-tongued dandy) templates. The sense of danger of ‘forbidden fruit’ often seen in the rake storylines was cited by the Booker-winning novelist and critic AS Byatt as a key Heyer trait.

In her 1991 essay ‘An Honorable Escape’, Byatt writes about how Heyer’s romances invoke ‘the faint frisson of danger which appeals to female masochism, and the appeal of achieving the impossible which (psychoanalysts would say) satisfies the Oedipal desires’. Byatt is a fan, as is her sister, the novelist Margaret Drabble.

Several accounts from World War II have documented the popularity of her Regency romances on military bases around the world. Soldiers recovering from their injuries would devour one Heyer romance after another—fitting, because she wrote her first novel to entertain her bedridden brother. Heyer was a sophisticated woman and a bit of a snob. To that end she never gave interviews and preserved no fan mail. The one exception to this rule was a letter written to her by a Romanian woman, a former political prisoner who distracted herself and her comrades for 12 years by narrating the plot of Friday’s Child over and over again.

Both Friday’s Child and April Lady (1957), interestingly, are stories where the hero and the heroine get married in the first act itself. This same basic scenario is played out in a few other novels too. This is a classic, breezy Heyer set-up, giving the hero and heroine plenty of breathing space to express themselves. The crux of the narrative is how they grow to love and respect each other, after an initial period of confusion or mistrust.

The Regency romance’s relationship with Jane Austen is also worth noting here. Heyer’s own work borrowed much more from the romance novelists of the real Regency era, that is, Austen’s contemporaries. After all, there is little by way of actual culinary or sartorial detail in Emma or Sense and Sensibility; Austen assumed a certain level of familiarity about these things on her contemporary reader’s part. The ‘vulgar’ (or popular) romance novelists of her time, on the other hand, devoted a great deal of attention to these details, simply because their audience was a much more diverse one.

A classic Georgette Heyer set-up gives the hero and heroine breathing space to express themselves. The crux of the narrative is how they grow to love and respect each other, after an initial period of mistrust

Paulette Richards, in her 2003 essay ‘Regency Romance Shadowing in the Visual Motifs of Roger Michell’s Persuasion’ noted that modern-day Jane Austen screen adaptations are heavily influenced by Regency romances, including but not limited to the costumes and the food. Richards wrote: ‘Following the approaches of contemporary Regency authors such as Catherine Coulter and Mary Balogh, who have stretched the conventions of the genre to add more erotic spice to their tales, filmmakers have prompted controversy with, for example, scenes of Darcy going swimming in Pride and Prejudice—his wet male body accentuated by tight breeches and a clinging gauze shirt—or a heavily cloaked male on horseback looming out of the rain to sweep into his arms the scantily clad, rain-soaked sister in Sense and Sensibility.’

The ‘adding more erotic spice’ bit happened from the late 1980s onwards, as Regency sales began to dip. New authors as well as old hands like Coulter and Balogh were encouraged by publishers to keep up with the times; the blunt messaging was ‘sex sells’. Non-white authors infused the Regency world with characters of all colours and creeds. Was this escapism? Undoubtedly so. But one must realise that the Regency romance and the formal bells and whistles therein provided a template, a blank slate upon which authors could project their own conversations about race, gender and yes, consent. In a 2015 Jezebel interview, author Jessa Dare (who writes both Regency and other styles of historical romance) said, ‘It (Regency romance) absolutely has connections to real history, but I like the fact that we’re able to play with it and we’re able to twist things or use and/or subvert the rules and the canon to tell the kinds of stories we want to tell.’

Bridgerton the show is the culmination of these concerns. The racial-integration-as-wish-fulfilment is taken to new heights here—the Queen herself is Black, as is the show’s ‘rakish’ male lead, Simon Basset the Duke of Hastings (played by the gorgeous Zimbabwean-British actor Regé-Jean Page). Through Simon’s character, we tackle some fairly ugly stuff like parental abuse (his father would hit him) and PTSD ( Simon would regress to his childhood stutter under pressure).

And then there’s an alarming scene towards the end of the first Bridgerton book, The Duke and I (2000), one which the show thankfully waters down. Basically, Daphne gets to know Simon’s secret — he doesn’t want to sire children out of spite for his monstrous father. Seeing as how she badly wants kids of her own, Daphne decides to solve this problem by getting Simon drunk and then riding him until he ejaculates inside of her. Sensing that 2021 audiences will be rightly horrified by this violation of consent, the show has changed the premise of the scene to make it more palatable.

Bridgerton is, at the end of the day, a Shonda Rhimes production. It is the first Netflix show created by her production house Shondaland; since Rhimes signed a nine-figure deal with Netflix in 2017. Rhimes knows how to get the best out of a genre—whether it’s the medical dramas (Grey’s Anatomy), legal/crime dramas (How to Get Away with Murder) or political thrillers (Scandal), she transforms tired genres into 21st century sensations. One hopes that with a second season of Bridgerton now confirmed, Rhimes will continue to update the Regency romance as well.