A Portrait of the Crore

From an unimaginable number, it has become all too ordinary. But if it no long captures the Indian imagination, what takes its place? 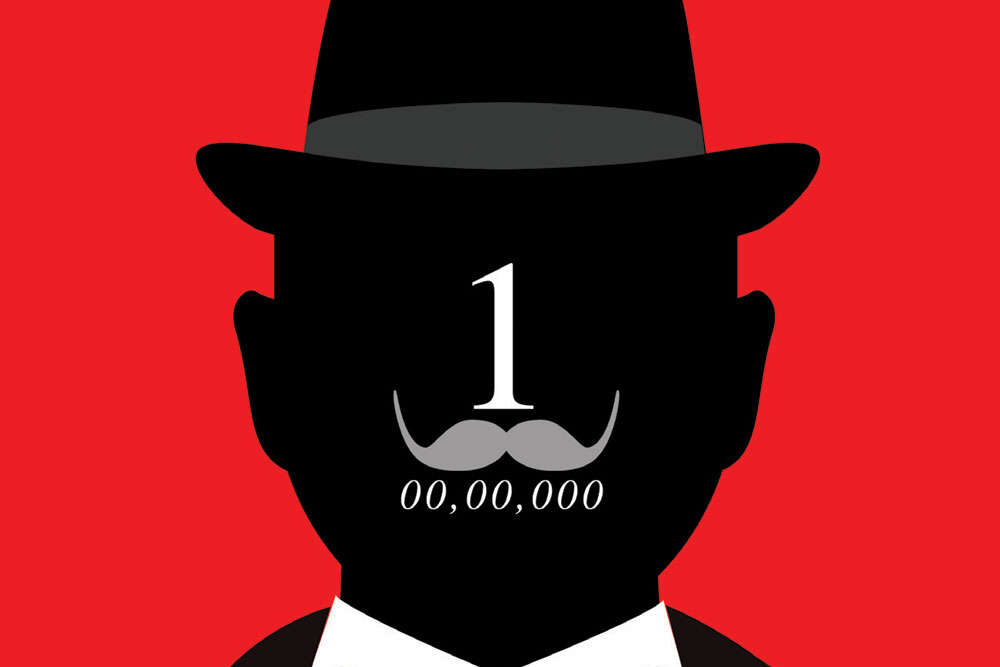 It was question from a friend that had got Dev Ashish, a Lucknow-based financial advisor, thinking about the crore. His friend, who had managed to save the amount, wanted to know whether it would be enough to retire. A few decades ago, this would have been a no-brainer. An India Today 1986 cover story on salaries, which gives an inkling as to the numbers involved then, had noted: ‘Hindustan Lever’s balance sheet has a list of people earning more than Rs 36,000 annually, and it runs into 43 pages of fine print… Ashwini Windlass studied journalism in 1976 but decided to go into management and today, eight years after he got a management degree, makes more than Rs 10,000 a month with an Indian pharmaceutical company. Alok Kapur earns Rs 9,000 thirteen years after he graduated from the Indian Institute of Technology at Kanpur, and Kavin Sethi—no more than a graduate—grosses Rs 7,000 plus perks after 12 years in the Lufthansa sales office in New Delhi.’ If any of those mentioned in the story four decades ago had found a crore walking down the road, they could easily have led carefree indulgent retired lives.

Ashish did the numbers after his conversation. He made a few assumptions for a person having Rs 1 crore who retires at the age of 60. One, that the money should last for 25 years, till he is 85. Second, that the corpus would give a return of 8 per cent, a mix of risk-free but lower-yielding debt investments

and higher-risk, higher-return equity investments. That, he calculated, would provide Rs 40,000 per month, plus there would be an annual Rs 1.2 lakh buffer for medical insurance, unanticipated expenses, etcetera. His conclusion was that a crore would run out by the age of 79. In a post on his website he quipped, ‘Your options? Either reduce the expenses or don’t live long enough. Only the former is under your control as the latter is suicide and punishable under Indian laws.’ There was also a crucial rider to the scenario that Ashish painted. He assumed that the person with the crore already owned a house. Otherwise, the amount wouldn’t even travel that much. If you have a home, are frugal or living in a small town, a crore might do for a comfortable life but otherwise the going could be rocky.

Two reasons are behind why an Indian will find it difficult to retire on a crore: the absence of social security and inflation. A medical emergency, for instance, might wipe out a substantial percentage of the corpus. Ashish says, “Unless you had a government job [with a pension], you are totally on your own [in meeting expenses]. Secondly, we are still not a developed economy. We are a growing economy and the pain of inflation will remain. The biggest worry is the value of your money would not keep up with inflation.” 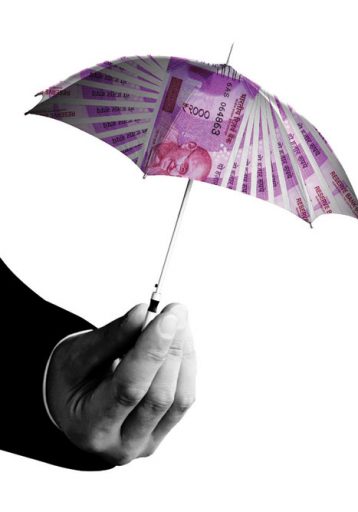 Inflation makes money cheaper every year; what it buys is not what it used to buy. If one crore, for example, could get you a swanky apartment in south Mumbai 25 years ago, then it takes five times that amount in 2019. Salaries and fees then increase to keep pace and what seemed an impossible number to an earlier generation becomes a normal ambition. Money’s devaluation is usually a gradual incremental process but in independent India two years—1966 and 1991—have particular importance. In 1966, the Indian currency was devalued by 57 per cent (from Rs 4.76 to Rs 7.50) against the dollar and in 1991, along with economic liberalisation, devaluation began at 19 per cent and continued. In 1990, a dollar would buy Rs 17.5, by 1995 it had increased to Rs 32.43.

By the 1990s, the lakh was already passé but the crore still remained a marvellous number for a poor country. When Amitabh Bachchan got a second lease of acting life from a quiz show, it was one that was deliberately named Kaun Banega Crorepati, promising any Indian who answered 15 questions a cheque with a crore written on it. Everyone imagined being that winner. After a decade, Bachchan would reminisce in his blog: ‘Ten years ago in the year 2000, when the entire world was celebrating the new century, I was celebrating my disastrous fortune. There were no films, no money, no company, a million legal cases against and the tax authorities had put notice of recovery on my home. An offer for television changed all that when I agreed to anchor ‘Kaun Banega Crorepati’ much against all the advice and resentment from friends family and advisers… It soon became apparent that it was going to be big and prosperous. I merely sat back and played the game as best it could be played. Before long I was out of the financial crisis and signing on an almost 2 year deal with the channel that was carrying it.’

But in 2010, the year that he was writing this blog, the crore prize was no longer thought to be enough. As he added then about the format of the show, ‘There are a few changes too. The money tree has been reduced in the number of questions—from 15 before to 12 now! You get to the prize 1 crore quicker… And then the clincher! Top question prize money after the 12th is the 13th, for 5 crore Rupees!! That’s like, serious life changing money!’ Bachchan’s fortunes wouldn’t falter again but the show never made quite the same impact as when it first came on air. Rs 5 crore in 2010, or Rs 7 crore as it is in 2019, just doesn’t have the same zing Rs 1 crore had in 2000.

Every time a new season of Kaun Banega Crorepati is about to be aired, there are inevitable media reports of earlier winners and none of them has leapfrogged into any elite orbit of wealth. Harshvardhan Nawathe, the first winner, we are told is an MBA and holds a job at a multinational company. Another person became an IPS officer. A cook who won a crore this year wanted to, among other things, build a temple and buy a water filter with the money. The case of Sushil Kumar, who won Rs 5 crore in 2011, is telling. Coming from a village in Bihar, he still remains there, having used part of the money to construct a large house for his joint family. Three and a half crore rupees—his takings after tax—can make you a rich fish in a small pond, but in the wider ocean of India, it does not set you apart in any great measure.

To appreciate why, consider the amount of crores the wealthiest in India actually have and it is somewhat mindboggling. Since 2012, the Hurun Report has been coming out with a rich list of Indians. This year the list, which is just out, has 953 individuals with net worth of more than Rs 1,000 crore. Their average wealth was Rs 5,278 crore. Reliance Industries Chairman Mukesh Ambani, who was Number One on the list, was worth a whopping Rs 3,80,700 crore. When India became independent, the richest man was said to be the Nizam of Hyderabad, whose wealth was somewhere between Rs 500 and Rs 1,000 crore, but that is a false comparison. His wealth was what accrued from the resources of an entire kingdom. Most of the crores in the Hurun Rich List were the result of toil. Anas Rahman Junaid, Managing Director, Hurun India, says, “When we started the India rich list about seven years back, we could find about 100 entrepreneurs [worth over Rs 1,000 crore]. Now the list has gone up to 953 people. About 47 to 48 per cent of the rich list are self-made. Even from the rest of the list, about 70 to 75 per cent are active in business. So, around 80 to 95 per cent are those who are actively growing their business.” 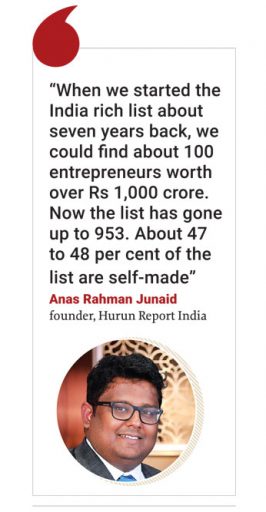 The number of crores involved in the cutoffs of different slices of the list have also shot up. The cutoff for the Top 10 increased from Rs 46,600 crore to Rs 71,500 crore, for the top 100 from Rs 3,800 crore to Rs 9,300 crore. “I would have liked to do a 100-crore list but it would be too huge and go into pages and pages,” Junaid says. And these numbers are only going to rise in future. He makes a comparison with China whose rich list also just came out. The cutoff there was $300 million, or a little over Rs 2,000 crore, and had about 2,200 people on it. China has 600 dollar billionaires, four times that of India, which correlates to the size of the two economies. China’s GDP is $14 trillion while India’s is a little under $3 trillion. “When China’s GDP was the same as that of India’s, the number of billionaires there was seven. India has 138 billionaires now. So even if Indian GDP hits $4-$5 trillion, the number of billionaires is going to go up a lot,” he says.

The Income Tax Department recently released data which revealed the number of crorepati taxpayers in India. As many as 90,000 Indians had an annual income of more than Rs 1 crore. The Mint newspaper reported: ‘There were at least 89,793 people in India who earned in between Rs 1 crore and 5 crore. In the Rs 5-10 crore income bracket, India had 5,132 taxpayers… If taxpayers across categories like individuals, HUFs, companies, firms, etc are included, the number of those with taxable income of more than Rs 1 crore per annum rises to about 1.67 lakh, a 19% jump from the previous year.’

There is one more reason why the crore just doesn’t seem enough—consumption. In the last three decades, goods that Indians buy have shot up exponentially in both value and range. Ashish says we should look at what personal expenses would have meant in a pre-liberalisation economy. “Life was pretty simple. If you, for example, had to eat earlier, the monthly bill was only related to groceries. Now it means those things plus eating out, eating in, packaged foods, etcetera,” he says. And so if you had a crore rupees to retire on earlier, you would be buying a lot less with the money unlike now.

No one in India would have thought once upon a time that a single bed would have a price tag of Rs 1 crore. Or a kitchen unit, a painting or a watch. But rich Indians are paying crores for items like these. And there is also the flip side that if you had only a crore and wanted a house, you would find it hard to get a flat bigger than a matchbox in many of Mumbai’s suburbs. For high-level corruption, a crore is hardly enough inducement today. During an anti-corruption raid, Rs 800 crore was recovered from a transport ministry official’s home in Andhra Pradesh a few years ago. Meanwhile, the stakes of low-level corruption are also breaking the barrier. Last year, a tehsildar in Pune was arrested for taking a crore as bribe for changing names in a land record.

From an unimaginable number, the crore has become all too ordinary. But if it no longer captures the Indian imagination, what takes its place? You run into a curious issue of semantics here. The crore rolls easily on all Indian tongues. But after the crore is the arab or 100 crore, a billion in English. But arab is a term that doesn’t resonate in popular culture. Who has ever imagined himself an arabpati? Maybe ‘Kaun Banega Billionaire’ will be the title of the show’s next big makeover.