A Performer on the Front Foot 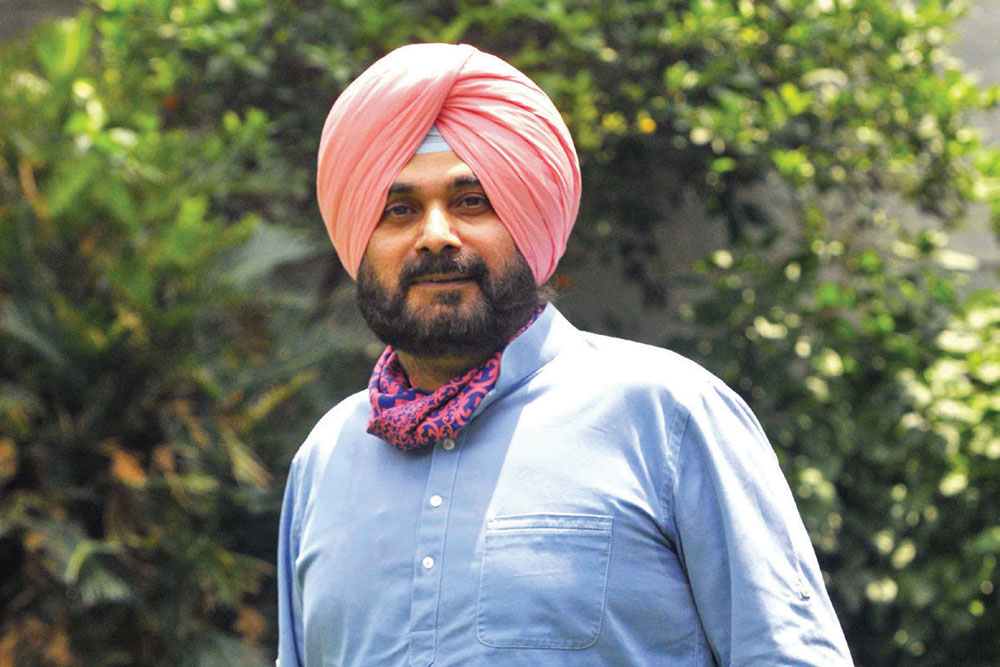 
IT IS THE STUFF of cricketing legend. Back in 1996 during a match in Sharjah, things got ugly in an India-Pakistan match. At one point, Navjot Singh Sidhu began walking menacingly towards Aamir Sohail, the captain of the Pakistan team. The situation crossed boiling point after constant verbal badgering of the Indian batsman.

A quarter century later, Sidhu’s supporters in Punjab say that something similar has happened over the last two years. The slow-motion crisis that began after Sidhu went to Pakistan on Imran Khan’s inauguration as prime minister now seems to be reaching a point of culmination. Two years after he quit the Punjab cabinet, Sidhu was appointed the chief of Punjab Pradesh Congress Committee (PPCC) by the party brass much against the wishes of Chief Minister Amarinder Singh.

The truth is that Sidhu and Singh never hid their distaste for each other. Singh, a politician with a much longer innings in the state’s politics, thought of Sidhu as nothing more than an upstart. As to the cricketer, he thought Punjab politics was like a fast-paced innings where a regular dose of fours and sixes would take him where he wanted. It didn’t, at least until now.

The trouble is that Sidhu bears dangerous markers of an anti-system politician. His original plans of levying entertainment tax on cable TV with alleged links to the opposition in Punjab and charging taxes for sand mining went nowhere. At the same time, the chief minister was slow in appreciating the groundswell of anger against the Shiromani Akali Dal (SAD) leadership and the “mass connect” that issues like corruption in sand mining have with the people of the state. In that, Sidhu was much sharper in understanding the pulse of the people. Perhaps the party’s high command, too, sensed that.

It is too early to say whether the former cricketer will become the next chief minister of Punjab. Amarinder Singh is no pushover and there is a multi-cornered fight ahead in next year’s Assembly election. In the southern part of the state, where the majority of the seats are located, the Aam Aadmi Party (AAP) is in the fray as is SAD, the traditionally dominant party in this area.

There is an even bigger question, one that may be premature at the moment: What kind of leadership does Punjab need to get it out of the economic morass it finds itself in? The legitimate—textbook—answer is the kind that the electorate votes to power. But that may not say much. Sidhu is a “man of action” kind of leader who increasingly appeals to voters in the state while Amarinder Singh is a thoughtful leader who appeals to a different constituency. A man of action may end up changing things, but whether that will be for the better of the state is an open question. Similarly, a “thoughtful” leader may end up doing too much thinking while events pass him by. These are the two poles from which the voters have to pick an option.

But these are hardly the kind of questions that are likely to trouble Sidhu. He is in a bat-wielding mood these days. His show of strength in Amritsar on July 21st and his aggressive campaigning to woo MLAs in recent days tells a very different story. His aim at the moment is to garner as much political strength as possible before the Assembly election and then reach for the top job in the state.

Punjab’s politics is usually a staid affair. The political divisions of Jat Sikhs versus the rest, Hindus versus Sikhs, North versus South, and Akali versus Congress, have been a settled matter for a long time. Unlike the Hindi heartland where once in a while a political entrepreneur makes it big, Punjab has remained immune. With the presence of AAP and Sidhu as a contender for the top job, anti-system politics may soon get its day in the sun.