What lies behind the spate of minority killings in the Valley 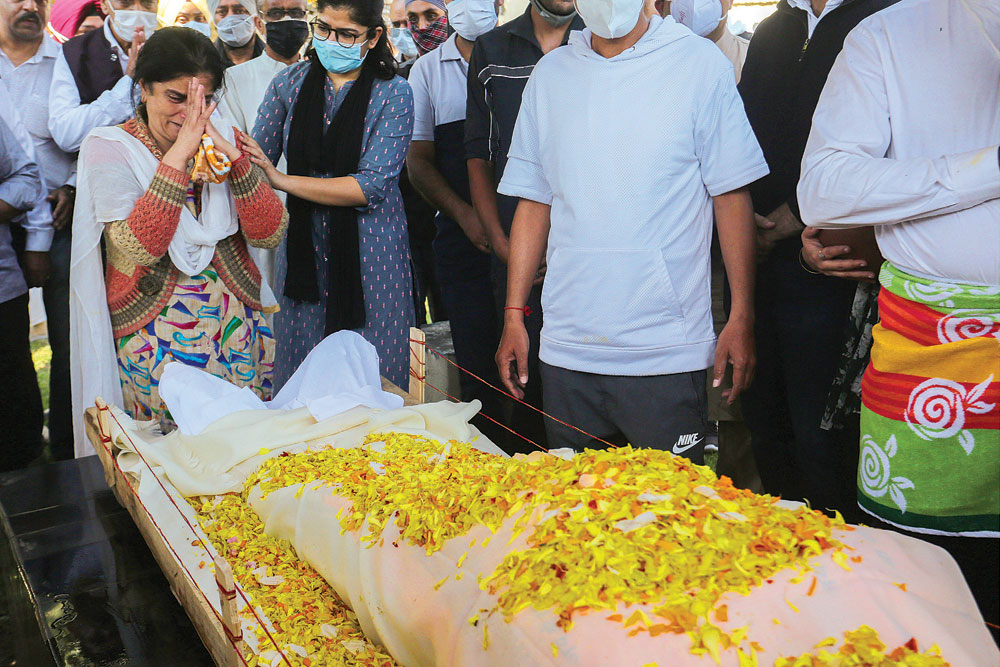 
ON OCTOBER 7TH MORNING, terrorists barged into a government school in the heart of Srinagar in Kashmir. According to eyewitnesses whom the police spoke to, all teachers were lined up and their identity cards checked. After singling out two non-Muslims, one a Sikh lady teacher and the other a Hindu teacher from Jammu, the terrorists fired at them with pistols, killing them on the spot.

Less than 48 hours earlier, terrorists had shot dead two other Hindus, a street vendor from Bihar selling golgappas, and a prominent Kashmiri Pandit who ran one of the oldest chemist shops in Srinagar. The man, ML Bindroo, 68, had chosen to brave it out in the Valley in the 1990s, even as most of the Pandits were fleeing as they were being hunted down by Islamist radicals. And now, 30 years later, he became a target in an increasingly homogenised Kashmir where non-Muslims are once again living in fear, with many of them opting out for safety. As this report is being written, several Hindu teachers in Central Kashmir have been directed to leave their accommodation and shift to a security camp nearby.

Chatter about the possibility of attacks on minorities has been doing the rounds in several groups at least since September 21st. That night, a few policemen were posted outside a prominent sweet shop in the Lal Chowk area run by a Hindu; also, a few appeared in a temple nearby and asked for the lights to be switched off. The act of killing the golgappawala could have been random. But even after solid input, there was no attempt to secure the premises of a popular Hindu chemist in the heart of Srinagar, which points to an absolute security failure on the part of the police. The killings of two teachers are shocking as well. That armed terrorists could enter a school in Srinagar city, spend time in identifying two non-Muslims among several Muslim teachers at the school, shoot them dead and walk away with impunity speaks very poorly of security measures put in place. Barring the killing of the Kashmiri journalist Shujaat Bukhari in 2018, such brazen murders have not taken place in Srinagar city in a long time.

Why have these minority killings started suddenly? There are several theories doing the rounds in Kashmir currently. One of them is that the Bharatiya Janata Party (BJP) Government had recently started the process of addressing the grievances of migrant Pandits whose properties were illegally occupied in their absence. The Government had also said that Pandits would be able to lay back claims on properties sold under duress in the 1990s. Much of it was more bluster than substance. But many in Kashmir believe that this is one reason why these killings have been triggered. Whatever the reason, the message is clear though: non-Muslims are welcome in Kashmir as long as they come in spurts for shikara rides and carpet buying and then go back. The moment they seek a more stable stake in Kashmir, it will be met with a violent reaction.

Much of it, of course, is also a result of xenophobia perpetrated by many in Kashmiri Muslim society. In the name of preserving the so-called unique relationship of Kashmir with the rest of India, a Kashmiri, according to them, is free to set up a business establishment in any corner of India, including outside some of the holiest Hindu shrines. But a poor man from Bhagalpur cannot set up his meagre business in Kashmir. For him, there is a bullet waiting in the next corner.

Consider a Facebook post by Kashmiri journalist Aasif Sultan, now jailed on terror charges. The who’s who of India’s civil society has spoken about him and shared the carefully orchestrated photo of him in custody with an Orwell book. In the post, he shares a picture of a boy, clearly a non-Kashmiri, with an invisible man’s arm grabbing him at his throat. “Remember these faces. They will come to you as bedsheet sellers, hair collectors. Kick them out,” Sultan’s post says.


The message is clear: non-Muslims are welcome in Kashmir as long as they come for shikara rides and carpet buying and then go back. The moment they seek a more stable stake in Kashmir, it will be met with a violent reaction

Sultan is not alone. The same xenophobia, albeit in more sophisticated language, is practised by many others, including prominent leaders and spokespersons of Kashmiri political parties. There is always the mention of ‘outsider’, which they say has been thrust upon Kashmiris by India. Even as innocent people, who were not part of any security establishment or political party, were being shot dead, some of them disgracefully attributed these killings to New Delhi’s decision to abrogate Article 370.

Which now brings us to Delhi. There is a terrible precedent in Kashmir of the Indian state failing to protect those who have stood for it. While separatists and local leaders peddling soft separatism always got top-notch security, the ones who stood for the idea of India in Kashmir had to pay a price with their blood. Since the abrogation of Article 370 two years ago, the Union Government has patted itself on the back over the changing security scenario in Kashmir. Recently, a string of videos was shot in Kashmir of school principals unfurling the national flag at their respective schools. One that was shared prominently was where the slain Hizbul Mujahideen terrorist Burhan Wani’s father was unfurling the flag at the school he heads. But nobody seemed to be cognisant of what lessons he would be imparting to the young minds in his school as a committed Jamaat-e-Islami cadre.

On the evening of October 7th, business establishments run by minority members in Srinagar were ordered shut early and many of them were asked to not venture outside their homes. Some Pandit businessmen in Jammu have received calls from the security grid, checking if they are in Kashmir. Many Open spoke to in Kashmir, including those serving there as government servants under the Centre’s package, had packed their bags and were preparing to leave by the next morning.

For their part, the police have been trying to assuage the situation by emphasising the fact that, so far this year, 28 civilians were killed by terrorists. These included only seven minority members. “These acts are committed by newly recruited terrorists who are about to join terrorist ranks,” said a statement from Kashmir’s Inspector-General of Police (IGP). While saying that they were working on several leads, the IGP also appealed to members of minority communities not to panic.

But for those who have already witnessed the nightmare of 1990, these assurances mean nothing. It is something they have heard in the past as well. So, at present, they are only relying on how it had turned out for them in the 1990s.