What families in Haryana will do to have a son. A witness’ account 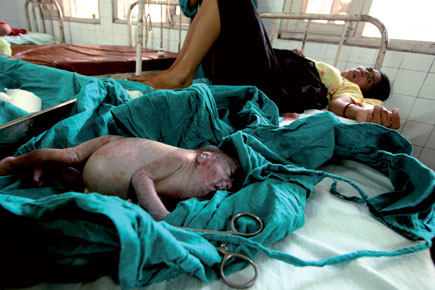 What families in Haryana will do to have a son. A witness’ account


I am sitting in my room in Sheetal Working Women’s Hostel at Rohtak, Haryana, going through my images taken the night before on the camera display. I hear a knock. A girl I have met only in passing comes in giggling. She whispers conspiratorially, even though there is no one else in the room: “I’m going to get married soon. Can I see the photographs you’ve been taking in the labour room?”

She has a nervous excitement about her that is baffling. What is it that she thinks I have been shooting at the Rohtak Government Hospital, I wonder. I casually remark that the images may actually put her off rather than give her any great insight into married life. She is not to be shooed off easily. So I show her a few photographs. A woman in the operating room with her legs in stirrups, eyes tightly shut in pain, pushing down with all her might as a bloodied baby is being pulled out.

A grandmother snatching a newborn from the hands of a nurse and pulling off the wrap to check its genitals. A woman who’s just delivered staring blankly at the wall, unresponsive to her fourth born—yet another girl—who is being fed packet milk with a swab of cotton by a relative.

For a few moments, I’m back in that small, feebly-lit labour room at the end of a long, paan-stained white corridor. The thick air of expectation among family members waiting anxiously outside weighs heavily on what is already a charged atmosphere.

There are 12 steel beds in all (they seem more like stretchers), a few occupied by two women together. A pair of attendants run helter-skelter whenever the tense silence is broken by the loud evenly-spaced wails of women wracked in pain. The lucky ones are escorted to the operating table; many have to give birth right there on the bed. Post delivery, they limp their way in a daze to the OT to get stitched up.

My visitor’s shocked gasp brings me back to the present. I stop scrolling; I don’t want to show her the next lot. She seems to have had enough anyway. After a long silence, she gathers her thoughts and volleys forth the weirdest question I have ever faced: “Are you double?” It takes me a while to understand what she means and when I blurt out an embarrassed ‘no’, she leaves as abruptly as she had come, looking a bit perplexed about what then had possessed me to shoot such disturbing pictures. The images I didn’t show her are of Simran, looking away in spent emptiness even as a pair of surgical scissors are about to sever the umbilical cord that connects her to her stillborn infant. I had spent the previous day and part of the night waiting for this delivery—as I knew that once born, the family would be in a hurry to dispose of the baby. They had their dark reasons.

As her first child had been a son, Simran didn’t particularly care when she was told that she couldn’t conceive again. Eighteen years later, her son died in an accident, leaving her desperate for another male heir. She believed her prayers had been answered when she conceived again. In her seventh month of pregnancy, though, she arrived at the government hospital complaining of unbearable pain.

The ultrasound revealed that though she had, in fact, conceived a son, he was suffering from ‘fusion deformity’. Simran confirmed the doctors’ suspicions. She had gone to a quack, who had given her a concoction to be had during her third month of pregnancy, the phase when a baby’s genitals are formed (and could be altered, she was promised).

Simran’s stillborn baby would in all probability be bundled in a white sheet, tied to a stone and thrown into a water body, or buried, or just discarded in a dustbin. Hindu custom dictates that children who die before the age of five are not to be cremated. I had heard stories of women who had miscarried while in the bathroom and had had the foetal remains flushed down with little fuss. It was beyond my forbearance to see what fate would befall her stillborn, and so I had returned to the relative sanity of my room.

This was in 2005. Later that same year, as part of a National Foundation for India media fellowship project on female foeticide, ‘India’s Invisible Women’, I would track down a ‘ladka-wala’ doctor (a doctor who delivers boys) on the other side of Haryana. Dr Rajendra Prasad Gaud, DHMS, was seated in his clinic in Ateli, the glass partition of which held this message in bold letters: ‘Aap udaas kyon? Bachche nahin ho rahey, toh miley. (Why are you sad? If you can’t conceive, I will make sure you do)’ Plastered with posters of bonny baby boys, the clinic was packed with women who had come from far and wide to meet this devotee of Baba Bhishamdasji.

Most were expectant mothers who were being assured that they would deliver not just one, but two consecutive boys. A few were grateful mothers who had brought their newly-born sons along for the doctor’s blessings.

So overwhelmed were these women that they would kneel in front of him with their heads bowed for his divine touch, a hand outstretched to receive the ritual ‘magic potion’. It was all quite surreal.

I saw him doling out a dubious looking mixture of white nuts, peacock feathers and golden ash to his patients. The golden ash was certain to be laced with enough arsenic to endanger the fragile beat of life. Paradoxically, there was almost a touch of the saintly in the doctor’s demeanour as he sat in front of his audience, exhibiting the boys he had helped bring into this world. As for the growing number of cases of deformed babies being delivered at the Rohtak hospital, I wondered whether ‘doctors’ like him deluded not just their hopeful patients, but perhaps even themselves. Three years later, when it was my turn to be in a labour room at a South Delhi nursing home, I prayed for a girl. The scales needed to be balanced, however fractionally, and I wanted to play my part. And that, I am happy to say, is just how it turned out.