Truth Is My Religion

In India, says former forest officer Rajendra Pratap Balwan, who was victimised for trying to save the Aravali forests, you are a rebel if you go by the book 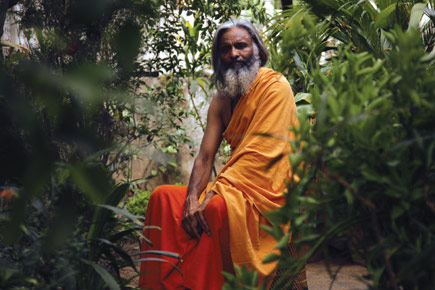 
Hari Om. Let me begin with the first thing people ask me: ‘Balwanji, why did you retire?’ I have only one answer. I listened to my conscience. A call came from within to take up sanyas. And I want to do something to improve our social system. Few people are convinced by that reply.

Conscience? Sanyas? Inner voice? Social system? Usually, there’s a quizzical look on people’s faces when I say something like that. I understand why. Conscience is a rarity in this country. Truth confuses people in this land. Truth should liberate. Here, it shackles. This is no country for honest men.

That message was hammered home in my first years of service. I realised that as an Indian Forest Services (IFS) officer, or in any government department, the individual is turned into a slave. In many ways, the state services operate in a feudal fashion. The administrative system bequeathed to us by Macaulay has the same functions it had then: creating a network of administrator vassals. The system has no space for transparency. I was rendered into a pariah—the permanent outsider. Let me tell you how.

In my first posting in Haryana in 1984, I reported large-scale encroachment on forest land in the Aravalis. I single-handedly caught poachers—very powerful people connected to the home minister and people in the Punjab state government department. I caught three guhars and one bakri that they had killed. I had chased these poachers for six to eight hours. I could have been hunted and killed too. They were gunmen and I was without any weapon. When I went in the evening to meet my senior (a conservator of forests), the district’s Superintendent of Police was also present. The latter said, “Why have you caught these people? I was supposed to get my meat today.”

At another time, in Surajkund, Haryana, in the early 1990s, there was a lobby to get the right goods purchaser for forest conservation material. One dealer offered us (bulk) material at Rs 35, while the average market rate hovered around Rs 55. I knew there was something fishy, but was given no option but to buy from him. I had to follow rules and buy at the cheaper rate. But the quality was bad. So I blacklisted the supplier. The next day, once again, I was without my post. The supplier was connected to the higher-ups in my department. When my senior asked me why I had blacklisted the supplier, I said I was just following the rules. He gave me a wicked laugh. “You think you’re a rebel, don’t you?” he asked. “No,” I said, “A rebel is one who breaks rules, while I’m only upholding them.”

Strange. In this country if you follow the rules, you’re a rebel. If you break them, you’re ‘normal’. It’s a condition that can drive any ordinary, upright man insane. More madness followed. By the middle of my career, death threats, harassment and rumour-mongering by my peers became routine. One day, when I was reporting on mining and poaching activity in Surajkund, Haryana, I drove around in a bike. As the bike climbed up a lonely road, three bikers, their heads turbaned and mouths covered, encircled me. “Tere bacche Surajkund Public School mein jaate hain naa? Hamein pata hai (We know your children study at Surajkund Public School),” one fellow said. I hit back in the crudest Jat Hindi dialect I could summon. “Chahe toh main tumhe unka roll number aur section bhi de doon? (I’ll tell you their roll number and section too if you want),” I yelled back. They were stumped. But they warned me to change my ways and sped off.

Time spent fighting to safeguard the Aravalis also told me one thing: destroying a forest is easy. The Aravalis are a textbook example. Generally, as in many cases of forest destruction, there are three simple ways to ravage it: mining; farmhouse construction; and making colonies. The spotlight has been on the Aravalis for a long time. Indeed, some of the landmark legal strictures regarding forest conservation in India have been put into effect citing the Aravalis as a case study. Yet, illegal mining was at its peak from 1997 to 2004. The Aravalis have meant a lot to me, since I’m fundamentally a nature lover and science student.

When I was shifted to the Department of Forests of the Government of India in the 1990s, I made critical remarks on a tender placed by miners for clearance of a project that lay clearly in forest land. A prime minister (I do not wish to name) immediately removed me from my post, without explanation. The next day, I confronted the PM. “Why are you shifting me? I only did my job and went by the rule book,” I told him. He showered his admiration on me. He called me a misfit. “Some things I have no control over,” he said, his face downcast. “I admire a man like you. If there’s any help or protection your family needs, don’t hesitate to call me.” That moment told me many more things about our system.

For all the barbs my seniors threw at me, I grudged them one thing: how well they knew the bureaucratic system; how well they could wriggle out of any spot. It’s popular to revile the political class in India. That’s not fair. Corruption stems from the top, yes. But the politician isn’t solely responsible. Their time in power is only five years. The villain of the piece is the bureaucrat. They teach the politician the ins and outs of the system. Businessmen provide the money; bureaucrats the brains; politicians the power. They are the Holy Trinity of India’s downfall.

Throughout my career, my family roughed it out. We were ready to pack and leave at any moment. Government administrative service is a fairly sedentary profession. But I became a nomad; that too inside my own home state. In 1997, sick of all the skirmishes in my career, my family sat down to take stock of the situation. My children had to get a good education and I had to marry off my daughter. I drew up a simple plan. Once my daughter was married, I would do exactly as I wanted. And, that I would take premature retirement. So, as early as 6 August 2007, I submitted my papers. I gave the government a full 22 months notice. Because I knew they would not prepare my pension papers. And I would not give them a bribe. It’s now been a month since my retirement, but not a single paisa has come my way. But work as part of the Supreme Court’s Central Empowered Committee (looking into illegal activities in the Aravalis) takes up most of my time and keeps the house running.

I am often asked why I didn’t let things be? Why take on people way more powerful than me? I say, I can’t see wrongdoing; and more importantly, I am doing my job. Through my childhood, I read widely and deeply on philosophy, the scriptures and religion. As a follower of the Arya Samaj, one dictum went deep into my system: ‘Atyachaar sehene wala atyachaari se zyaada paapi hai.’ (A man who tolerates injustice is more guilty than the perpetrator of injustice). And, in Hindu scriptures, religion is not defined. It is understood as dharma. Truth is my religion. That is my philosophy and strength. And your greatest strength is your greatest enemy and vice-versa. I never forget that truth is my biggest friend and worst enemy. I will continue my fight for saving the hills, from outside the system, since I now know it from the inside. Hari Om.