The One and Only

Will Patna’s first nightclub be able to survive? So wonders Chinki Sinha on a visit to Disc Man 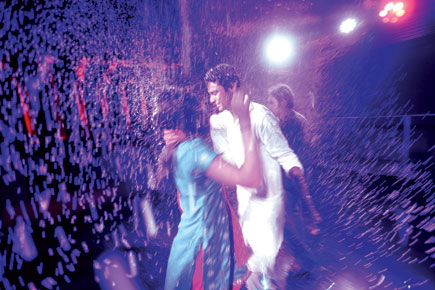 Will Patna’s first nightclub be able to survive? So wonders Chinki Sinha on a visit to Disc Man


I could dance here, but I choose to stay on the side of the floor, where the neon rays criss-cross the surface, performing a dance of their own. Once Patna was a city of day discotheques. I can remember at least three that opened in the past decade or so, and shut down as quickly.

There is nobody else at this discotheque.

It is past 7 pm. Disc Man is a proper disco, the first in the city to remain open at night. No bulbs with colourful cellophane paper wrapped around them, no ugly sound boxes and cheap mixers. There is a huge bar, but alcohol is not selling yet. In fact, the disco hasn’t even opened officially, but people know of it and come to experience this new space.

Earlier, I had walked down the crowded street, past the the windows of the pizza joint where young college students sat, in search of the nightclub. It had been raining that evening.

I jumped over the little puddles of water, circled the building, crouched under its scaffolding, and wondered if this was the right place. Workers sat huddled under the parapet. Water dripped and leaked from many places.

This looked like an unlikely place for a nightclub. The walls had been spat on many times over. These were juxtaposed with advertisements of coaching centres that tell you how to crack examinations. ‘Put on your dancing shows’—this was the message in an elevator. It was awkward being in that enclosure, going to a discotheque in Patna in the evening.

When I was in college, I had once carried a change of clothes with me; so did some of my other friends. Later, we met at a friend’s place and changed into jeans and tops to go to this place with blinking lights where a DJ I knew, Ali, would be mixing music, headphones clasped onto his ears. It was on top of Candy’s store, a pastry shop that was considered a ‘cool’ location, where young men hung out in the evenings, sipping soft drinks and looking out for their girls as they came out of various coaching centres nearby. In any case, that afternoon, I smiled as the DJ gave me and my friends our first disco experience.

That was perhaps the first day discotheque in the city. More would open later, and eventually shut down. Not that a discotheque in a city grappling with so many other issues mattered, but to the young, it was like a rite of passage. And Ali had taken it upon himself to address this deprivation of sorts. To him, it was absurd that girls and boys couldn’t dance at a club in their own hometown.

His disco wasn’t fancy, just a large hall with disco lights and a DJ console. It was dimly lit, but the revolving lights would catch you unawares, and it was fun to be there. An affair had started there and the couple eventually got married. But they had danced there that afternoon, and their faces glowed with love in that shifting, revolving light.

But it didn’t last. Ali could not go on. He sensed trouble, so he packed up and left, and spoke of all the things that he had wanted to fix but couldn’t because the city would not let him.

Not that we didn’t try. In 2001, Pandora’s Box opened in Patna, and boasted of colourful lights, and had an entry fee. Women could enter alone, but men needed partners. And the owner, Ayush Sahay, prohibited alcoholic drinks. All this was done to ensure women’s safety. But it didn’t survive either. It was way too chaotic then to run a day discotheque that would remain open until 6 pm and draw college students. The world was experimenting, getting ahead, and here we were struggling to have a disco up and running in this city. It became our reference point for freedom, for the limits of our liberties.

But that was when the law-and-order situation was plunging in Bihar. Yet another day disco had opened, but I am told that the rogue politician Sadhu Yadav, who was accused of the infamous rape and murder of Shilpi Jain and was a terror in the city then, had caused trouble and it had to be shut down. Those were curfewed times. A disco was out of bounds, and repeated failures at opening one suggested how clamped our freedoms were.

Now, standing here in front of the new nightclub, I wondered if it would last. It has been around for a little more than eight months. On 16 December 2012, when Disc Man opened in Patna, a Russian DJ Kathy played trance music. That was perhaps strange in retrospect, but the manager Ashish Singh tells me how the opening night was a grand success. There is a Rs 500 entry fee for a couple, and the coupons can be redeemed against soft drinks. Disc Man will be getting a liquor licence soon, says the manager.

That’s when the crowds will come, in this attempt to free the city of its reputation. ‘Dancing with the feet is one thing, but dancing with the heart is another,’ says the line on the cover photo of Disc Man’s Facebook page, the image of a girl with eyes shut and headphones on her ears. There are other quotes too: ‘Dance is a song of the body. Either of joy or pain’ by Martha Graham, for one. In most, there is a strange resonance I find with the city.

Safety is still a concern in Patna. But this building called Shahi Building on Exhibition Road is owned by the state’s education minister and thus is endowed with some sense of security.

Ashish, a young man who previously worked at Kapil Dev’s Eleven restaurant in Patna, is in charge of the place. He says they have hired five bouncers and there’s enough security to handle any unacceptable behaviour.

They have also got DJ Sam from Bombay. He mostly plays Bollywood music because that’s what people want. That evening—it was a Monday—I didn’t see the DJ. But music played. There was a register of entries and accounts and I flipped through them to see who had visited this place.

On some days, the disco’s sales went up to Rs 7,000, and on a few days the manager had scribbled ‘Nil’ because nobody came. This disco operates in a strange twilight zone. It is open till 11 pm. In Patna, liquor sales are only allowed until 10 pm. The place opens around noon, and most college students show up in the early evening. After NIFT, IIT, and other colleges opened in Patna, there is a revivalist spirit of sorts. The disco is the ultimate expression of it.

Over the next few months, the management will work on the entrance of the disco and ensure that the place is advertised. “You can see girls boozing and smoking. It is not the Patna you grew up in. Times are changing,” Ashish says, and smiles. They are. They should.

He says the police are kind. A few days ago, some bureaucrats had turned up and wanted to see the disco but he had insisted on no stag entries. They left without much noise.

Disc Man is owned by Kamal Khanuja and his brother. He is one of Patna’s oldest hoteliers and owns property around the city. They had been waiting for the right time for this. There’s another nightclub that’s being built in the Pataliputra locality by MLA Anant Singh, who has a dubious reputation of operating a fiefdom in Mokama in interior Bihar. “But he won’t go there. People will get scared,” Ashish says. “There was this other disco, The Fox’s, and Sadhu Yadav allegedly came and because of something he did, it had to shut down. In fact, Sadhu Yadav himself had inaugurated it,” he adds.

He says this is officially the first proper disco in the city. He shows me conference rooms and other parts of the discotheque.

It is all glitter and shine. In fact, it is almost beautiful.

I noted down three numbers from the register. I thought I would ask them how they had felt when they danced in this disco. But two numbers were wrong, and the third was of a student in Delhi. His father said he didn’t know his son’s number, and couldn’t help. He had no idea what this disco was, or if his son had been there. But one evening, his son had danced to DJ Sam’s music.

There’s something strange about being inside a discotheque with music and no people. It is dark in here. A different kind of dark, not the uncomfortable sort. A chandelier hangs in this round room. The walls change colour, alternating between red and blue and green in accordance with flashing lights. It is a real disco. Like the ones in other cities.

It is here for now, and I hope it stays. For now, it hosts birthday parties on some nights. To break even that isn’t a bad idea. When it gets its licence, come and see, Ashish says. Will everyone be dancing late into the night? I ask. “That’s the hope,” he answers.

I tell him I will be back. Around New Year’s, with old friends. Maybe then I will dance. With joy. For old times’ sake.