The Long and Winding Road

Ankur Rahman, along with his brother Rodin and their friend, Akhup Khom, push the idea of slow travel to its limit and decide to walk from Tezpur in Assam to Sela Pass in Arunachal Pradesh—a good 340 km away. Asked why, Ankur’s answer is “Why not?” 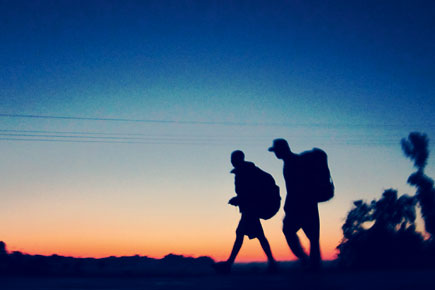 Ankur Rahman, along with his brother Rodin and their friend, Akhup Khom, decided to walk from Tezpur in Assam to Sela Pass in Arunachal Pradesh—a good 340 km away. Asked why, Ankur’s answer is “Why not?”


I don’t pledge allegiances easily. I wouldn’t say I’m a ‘mountain person’ or that I only like beaches or rivers or jungles. For me, being outdoors, in the wilderness, at whatever altitude or distance from the sea, is exhilarating enough. I work as a doctor with the Indian Air Force, and am lucky to be posted in Tezpur, near my hometown Guwahati. Last summer, I was trying to decide how best to spend my annual leave—my wife and I had already travelled to a large number of places in the north and west of the country and I wanted to do something within the Northeast, preferably Arunachal Pradesh, because I’d heard it was a beautiful, largely untouched place. I was told, however, that the road was ill-maintained—to quote, “virtually nonexistent”—and travelling there would definitely ruin my car or bike. So I thought, well, why not walk? That way I could enjoy the scenery, meet people and have an exciting holiday, all at the same time. And at that point, 340 km in 20 days seemed very manageable.

There was barely any planning involved. We were walking along the road the entire trek, so we just needed to make it from one town to the next and stay in a hotel. Being in the armed forces helped—any place that didn’t have a hotel, we could use army accommodation. (Arunachal has many military base camps for strategic defence purposes.) We didn’t book places in advance or carry rations, except a few bars of chocolate. The only things we did buy for the trek were good backpacks and thermal flasks. Akhup and Rodin also needed inner-line permits to enter Arunachal.

We set off from Tezpur to Nameri and from there to Bhalukpong (about 65 km in all), and the way was wide and flat and flanked by swathes of golden paddy. Important too is the road’s history. The Dalai Lama, after walking from Lhasa to Tawang, was helped down this route to safety in 1959. Two years later, when the Chinese attacked, the story goes that the Indian Army found motorable roads here only on paper; in reality they were ‘virtually nonexistent’. Since then, this road, still under improvement after 1963, is used to transport supplies to Army base camps in Arunachal. Yet, as I realised, it was difficult to enjoy the scenery or dwell on historical nuances when the sheer challenge of our task set in; to make it worse, we were all blessed with three or four painful blisters on our feet. Since these forced us to walk awkwardly, the muscles around our shins began to get overworked. At Bhalukpong, we rested at Eco Camp for three days—and I must admit the chilled beer and good food really helped improve our spirits.

We made it to Sessa, located at a sudden, lonely 2,500-feet altitude, where we met an army major with a pet monkey and dog. (I guess that’s what years of isolation can do to you.) Another interesting character we came across was 80-year-old Sandchem Mijhi in Tipi. He was a havaldar in the Army and had walked from Tipi to Tawang in 1971, when floods had washed away the roads. It helped us remember that this had been done before, and inspired us to carry on.

A few kilometres away from our next stop, Nachi Phu, however, there was a point when, due to the pain, I couldn’t walk any further. Since we hadn’t brought tents to camp outdoors, we managed to hitch a ride with three fishermen on the back of an open truck with no side railings. This, to put it mildly, was the most hair-raising ride of our lives. We were at 6,500 feet, moving at break-neck speeds on insanely winding, narrow roads, inches away from a sheer drop into thick jungle. While Rodin sat stoically in a corner, I hung on to a length of rope, and Akhup, on all fours, clung to whatever he could find. In between bursts of hysterical laughter, I kept thinking it would have been safer to crawl to Nachi Phu.

It must have worked, all those fluttering prayer flags along the way, for we made it there safe and in one piece. Our taxi ride to Tenga was rather more comfortable, and this was where we ate our best meal of the trip—70 pork momos and rice-dal-sabzi with chicken at an unnamed roadside place. To be honest, though, when you walk so much every day, everything tastes really good. Even Maggi. We decided to rest for two days since I could not get from my bed to the bathroom without my walking stick, and then walked to Bomdila, Munna Camp and Dirang. Until Bhalukpong, people were always telling us that we were mad and it couldn’t be done. Sometimes it did feel impossible, and only the thought of how we’d be teased by friends and family if we returned defeated, made us keep going. By the time we reached Tenga, people were immensely impressed that we’d managed to come this far, and it was during this time that we thought that we could actually do it. From Dirang we reached Senge, where the landscape changed dramatically. The thickest jungle was around Sessa, and hundreds of beautiful, exotic birds could be seen along the road—you’d miss them all if you drive by in a car. After Nachi Phu the trees change to pine and cedar with little undergrowth—this is because all the rain occurs towards Sessa and the clouds crossing over to the other side carry less moisture. After Senge, there were few trees and also very little grass, and from Baisakhi (at 11,000) to Sela (13,600 feet), the slopes were barren and covered only in rocks and snow.

My most cherished moment was seeing a milestone that read ‘Sela 1 km’, and then reaching Sela and celebrating with a peg of Black Label. The whisky was a gift from an Arunachali minister who happened to be passing Sela, had stopped to take pictures, and heard we’d walked all the way from Tezpur. Needless to say, he made my day.

Walking is all about mental persistence, and that’s why it’s easier to walk in a group than alone. A long trek should be done with people whom you are comfortable with (and a generous supply of muscle relaxants). Despite the arguments, of which there were many between Rodin, Akhup and me, especially over short-cuts, an experience like this always creates a close bond between people. All the pain and hardship vanishes as soon as you reach your final destination, and the feeling of accomplishment is so great you want to do it all over again.

As told to Janice Pariat