The American with a Marathi Aai

She had heard chilling tales of the Indian monster-in-law even in the US. So she practised her Marathi diligently when it was time to meet hers. They got laughing in the first three minutes, and they still are, says Amanda 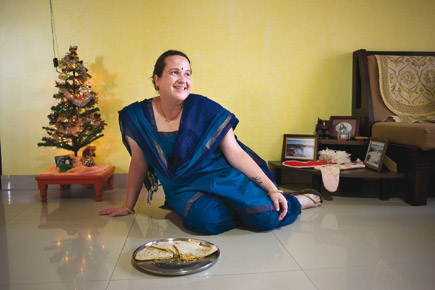 She had heard chilling tales of the Indian monster-in-law even in the US. So she practised her Marathi diligently when it was time to meet hers. They got laughing in the first three minutes, and they still are, says Amanda


A traditional Indian mother-in-law. You must have heard of her.  She is a dark, looming figure, known for rendering newlyweds’ lives nightmarish. Legends of her controlling nature have been passed on in hush whispers from one generation to the next. Ripples of her fame—or rather, infamy—have reached as far as even my humble home in the US. Though just a simple girl from the American southeast, I, too, had heard horror stories of the Subcontinent’s meddlesome mothers-in-law (Mils, for short). In magazines and newspapers, I read of jealously possessive parents performing physical and psychological torture. Indian friends of mine, as well, recounted to me first-hand experiences with their new moms. There were those Mils who sought a say in their newly-married children’s everyday decisions, and those who demanded that their offsprings’ marital saga mirror their own. The Indian Mil seemed to be nothing short of a monster.

However, now that I am married to a wonderful Indian man, I can safely say that the epic of the infamous Indian Mil is simply a matter of folklore and fable. In fact, knowing my husband, Bhal, I never worried about that legendary creature appearing in my married life. There was no way that such a strong, courageous, loving, sensitive and intelligent individual could have been raised by anyone other than truly terrific parents. And I was right!

But I am getting ahead of myself.  Let me rewind a bit. Bhal and I met at work nearly three years ago. The first thing I noticed about him was his smile—it was genuine, real,  dazzling.  It had me so taken that, seemingly moments later, we were getting married.  This, of course, meant procuring permission from our parents—a task that was not immediately evident. Both our parents’ fear was their perceived disparity in our cultures. My husband and I are lucky, in the sense that our generation has been able to live, work and become friends with so much of the world.  Our parents, having not had that opportunity, found more to fear in our future partnership. My folks were not only concerned with my ability to adjust in India, but also the fact that I was living so close to the conflicts in Pakistan, Afghanistan and China. His parents feared that I would not be accepted into Indian culture.

Over the next seven months, we both worked hard to help our parents understand each other’s cultures. Convincing my parents became easier once they met Bhal and discovered for themselves what a wonderful person he is. His parents took a little longer to come around. His father and I shared many conversations and emails so that he could learn more about my upbringing and me as a person. At the end of it, I think what surprised both our parents the most was just how alike we all were. My folks were amazed at the depth of knowledge and the love Bhal already had for American culture. His family was surprised that my upbringing had been almost exactly like that of their son—we had played the same games, experienced similar situations, and learned the same things. The only difference had really been the language.

Truth be told, though, I was a bundle of nerves when I first spoke to my mother-in-law. Bhal’s father is proficient in English, but my Mil has never really had the opportunity to exercise her English language skills over the years.  I was doubly anxious—not only were we speaking for the first time, but there was a language barrier to overcome!  My already thick accent, typical to the American South, sounds even thicker when I’m nervous. I had to keep reminding myself to speak slowly and enunciate clearly. I had asked Bhal to teach me a few words in Marathi in the hope that I could at least make her smile or laugh. My father had raised me to believe that laughter is God’s best and most favoured medicine and that I should try to use it frequently. Phew! It worked, as I made my father-in-law chuckle with promises of sneaking him a jalebi when Bhal or Aai (Marathi for mother) weren’t looking. But the most wonderful sound was that of my Mil giggling over my horribly clumsy attempts to speak Marathi. By the time I finished my sentence, both she and I were laughing so hard that it didn’t really matter what I said anymore. In less than three minutes, they both made me feel like I was going to be their daughter—not just someone marrying into their family.

I love my Aai.  There are so many small things that have brought us closer over the past one year. One time I played Hindi music for her on my iPod while she was doing her crossword puzzle, which she loved. We have fun watching Marathi serials together, too—I bombard her with silly, naughty questions while she just giggles. But mostly, I cherish our interaction when I first came to India. We had stayed with Aai and Baba in Mumbai for the first two days and then travelled together to Pune. I had fallen ill at that time and was feeling extremely uncomfortable. On top of that, there was so much to be done in our apartment that I nearly broke into tears. It was Aai who was my little ray of sunshine. She borrowed extra bedding from the neighbours, made me some broth and fixed everything.

Aai has very diverse but extremely simple interests.  She is a really talented badminton player and loves watching cricket.  She loves to keep a neat house, and is excellent in the kitchen.  Our love for cooking and experimenting with food binds us together, and we can often be found swapping recipes. Aai hates spaghetti but ate it once to please me after I made a homemade sauce for her. She enjoys trying to teach me Marathi and I enjoy messing it up just to hear her laugh. We browse the net together and I often show her pictures of where I grew up or places in the US that really inspired me. I enjoy giving her head massages and she loves receiving them. Aai has a great sense of humour; she and I love to pick on each other, usually with Baba or Bhal’s help in translating.

Our relationship is a matter of envy even to my American friends married to American men. Yes, even in the US there are overbearing or uncaring in-laws. Some young couples there either feel that their parents interfere too much in their lives or, conversely, that the family hasn’t done enough to welcome their spouse into the family.  I am lucky that my Aai welcomed me like a daughter, made me comfortable, and loved and accepted me as I am. That’s why I like to call her my mother, and not my mother-in-law.

As told to Avantika Bhuyan