Lincoln followed Douglas on his campaign trail, goading him from the audience 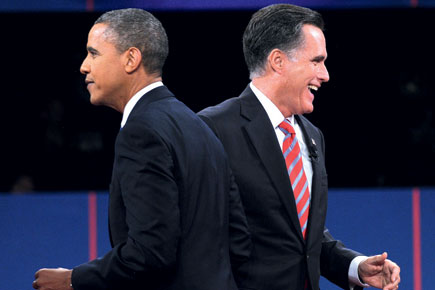 Lincoln followed Douglas on his campaign trail, goading him from the audience


If Mitt Romney wins the US presidential elec­tion, then it will be squarely ascribed to the first of his three debates with Barack Obama when he came across as aggressive and enthu­siastic while Obama appeared uninterested. An election that most people  thought Obama had already won suddenly became a contest of equals.

The roots of the event lie in the 1858 series of seven Illinois senatorial debates between Abraham Lincoln and Stephen Douglas. It is believed that Lincoln followed Douglas on his campaign trail, goading him from the au­dience during his speeches. The pair eventu­ally took the stage for three hours to debate the moral and economic quandaries posed by slavery. Douglas eventually won the seat.

In 1940, Republican candidate Wendell Willkie challenged President Franklin D Roosevelt to a debate, but he refused. The idea got a boost in 1948, when the radio broadcast of a debate between Republican primary contenders Thomas Dewey and Harold Stassen got many listen­ers. The Democrats followed suit in 1956, with a presidential primary debate between Adlai Stevenson and Estes Kefauver.

The first presidential debates, between Senator John F Kennedy and Vice President Richard Nixon, were held in 1960 at a TV stu­dio, with more than 66 million viewers. It de­livered something of a split result, with those tuning in by radio asserting Nixon had an edge and TV viewers claiming Kennedy had the up­per hand. Kennedy won the election.

Both Lyndon Johnson (in 1964) and Nixon (in 1968) turned down debate requests. It was not until 1976 that televised debates started again. Governor Jimmy Carter and incumbent President Gerald Ford met for three debates. Since then, this has been a fixture during US presidential polls.