Saying No to St Stephen’s 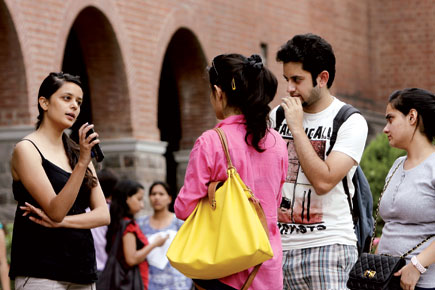 
In April 1984, at the age of 17, I finished my requisite 12 years of schooling by passing my ‘board exams’. Shortly thereafter, I began the familiar grind of applying for admission to Delhi University: I caught buses to the main North Campus, visited one college after another, picked up application forms from each, and after filling them out, handed them in with the application fee. I then waited for the ‘cut-off lists’ to be announced; they would tell me where I would be spending my next three years.

Among the colleges I had applied to was St Stephen’s—my father’s alma mater—for its science programmes, Physics, Chemistry and Mathematics. I dreamt of a post-graduate career as a researcher of some sort; perhaps I would study planetary science, perhaps astrophysics, or some other esoteric science.

A week or so later, when the lists were announced, I had been selected for an interview for an honours programme in Chemistry. Yet, despite having applied, I declined the interview call. Instead, a few days later, I joined an honours programme at Hindu College in Mathematical Statistics— a subject of study that ranked a distant third behind Physics and Chemistry in my hierarchy of preferences. I had decided I did not want to attend St Stephen’s; indeed, I did not even want to be interviewed.

In between the time I had applied to St Stephen’s and been called for the interview, a low-level dislike of St Stephen’s had blossomed and flared. I had heard the usual chatter about St Stephen’s snobbery for a while; most of it—the catty tales of how it had been the home of brown sahibs and still was—had rolled off my back. But the details of its admissions process had begun to grate on me. Every other college at Delhi University admitted you on the basis of your marks in high-school examinations: make the cut-off point, you were in. There was something seemingly egalitarian and democratic about this arrangement. But St Stephen’s, for some inexplicable reason, wanted to see you in the flesh. Its requirement should have been merely an irritant, the kind of hurdle an Indian school boy would have been expected to clear in that maddening rush for an all-elusive ‘seat’. I should have dealt with it; I should have been ready for it given my all-too-frequent encounters with Indian bureaucracy. Surely, this was just another manifestation of that? But I did not see it that way.

Instead, I saw it as a malevolent symbol of an elitism I despised. Over the course of a few days, as a sometimes easily-infuriated 17-year-old, I rapidly developed a theory of why St Stephen’s included the interview in its admission process. It sought to weed out the ‘Central School-Kendriya Vidyalaya- Trans-Yamuna’ types; it sought out Delhi’s upper and middle-class, the Anglophilic and Anglophone children of its bourgeoisie; it wanted boys and girls who wore blue jeans and whitecollared shirts, who talked animatedly of their plans for graduate school in the US; it did not want ‘Biharis’ or ‘bhaiyyas’; it did not want rough types, those who might wear chappals to college and ride DTC buses from destinations other than South Delhi. The exam marksheets would not provide this information, but an in-person interview would. The college’s interviewers would be able to examine candidates’ clothes, accent and style; they would be able to determine whether the putative Stephanian spoke English with the right intonations and comported himself in the appropriate manner.

Bizarrely enough, I might have met their desired demographic profile: my father was a Modernite and a Stephanian; I had gone to boarding schools, and yes, Modern School as well; I spoke English fluently, and wouldn’t you know, I wore blue jeans, lived in South Delhi and spoke glibly of my tastes in rock music.

But somehow, this knowledge failed to comfort me. I felt estranged from those that I thought were the targets of St Stephen’s interview committees. I was the son of an Air Force pilot, a member of India’s urbanite middleclass, and I might have attended a ‘public school’, but I still felt like the child of a government servant. I did not identify, and indeed never had, with the considerably more wealthy schoolchildren I had often seen, met and interacted with in New Delhi. The idea that an interview committee would evaluate me as being worthy enough to join the ranks of those snobs struck me as deeply offensive. I found the dismissal of the implied egalitarianism of the marksheet system problematic. Just what did St Stephen’s think it was? Why was the system that was good enough for the rest of the university not good enough for this college? So I said ‘no’ and walked away. In my opinion, by refusing to attend the interview, I was not participating in the system, I was not perpetuating it.

As political tactics go, this was not a particularly well thought-out move. I did not write a letter to St Stephen’s explaining my action; I did not write a letter titled ‘Why I will not be attending an interview at St Stephen’s’ to the editor of a local newspaper and call for a boycott. Perhaps I dimly sensed no one would join me. I simply refused to show up. My gesture was lost, and someone else took my place.

I went on to finish my BA at Hindu College; I cheered as our sports teams comprehensively thrashed St Stephen’s whenever they played; I joined in the ‘ragging’ of St Stephen’s students on the University Special buses with just a little extra gusto. When my three years of college ended, I left for the US to study Computer Science, and then eventually, Philosophy.

I often wondered about my decision. By not going to St Stephen’s I had missed out on a chance to be part of a cohort of ambitious, intelligent, hardworking college students; they would have aimed high, I was sure, and I would have too with them. My classmates at Hindu College possessed all the qualities I attributed to their Stephanian counterparts, but my insecurities turned me into a second-guesser.

I might have gone on to a top graduate school in the US. Perhaps I would have studied my dream disciplines; and best of all, I would have, to use modern parlance, had great ‘networking’ opportunities. Of course, the fact that I did not attend a top graduate programme in the US had everything to do with my lack of application and motivation in my undergraduate years and nothing to do with my cohort, but in my most acute moments of other-directed angst, I failed to see it that way.

I often met and read about St Stephen’s graduates in the US. Their academic careers seemed to exist in the fast lane in a way that mine seemed not. I thought I recognised two Indian fast-tracks to academic success: the IIT one and the St Stephen’s one. Members of the latter appeared to secure the INLAKS, Nehru and Rhodes scholarships that took them to Oxbridge; the former went to Stanford and Berkeley and MIT. I felt myself floundering in academic backwaters; I appeared to have no powerful academic community to network with. Nice work, champ; all that idiotic posturing in the dark, all for naught.

In my darkest hours, staring at an editor’s curt rejection note, a publisher’s polite refusal to entertain a book proposal, fuming yet again about how the Matthew Principle—those that have, get more—played itself out in academia, I would curse myself, including among all the other stupid mistakes I had made in my academic career, the intemperate, ill-directed response that had made me reject that interview call.

Why didn’t I go for the interview, get admitted and then make up my mind? Admission to St Stephen’s in my time represented for many students in New Delhi and elsewhere who were not going to IITs or medical schools—as perhaps it does even now—a singular achievement. At one stage I had aspired to it as much as anyone else. But somehow, another emotion had taken over: a curious febrile mix of resentment and anger at the snobbery I had sometimes been exposed to in Delhi, and which I took St Stephen’s to be representative of. I didn’t want to be judged by a panel of ‘theirs’. Somehow this had congealed into a political stance against St Stephen’s elitism.

Now, considerably older and hopefully wiser, I do not regret my decision in the slightest. It was indicative of a passion that I could have calibrated, but if you are not going to be irrational and intemperate when young, then when else? Perhaps that same untempered impulse formed the basis for the ambition that drove me in later years to change careers—away from computer science and back to the humanities. The humanities subjects were what I had loved studying in school; I had only changed my mind and selected the sciences in high school and later, in college, because studying English Literature or History felt like a self-indulgent choice when career options seemed available only in the usual suspects: engineering, medicine et al. If I had gone to St Stephen’s I might have gone on to become a run-of-the-mill week day scientist, just getting by, floundering in graduate school without any real talent. I might have been found out at the wrong time. By choosing a mediocre programme in Computer Science, and securing a boring job as reward, perhaps I had ensured I would exit that field and seek my fortunes elsewhere.

In January 2011, I travelled back to Delhi, and, thanks to arrangements made by a departmental colleague and friend—a St Stephen’s graduate—gave a talk to St Stephen’s Philosophy department.

My host was the impossibly erudite KP Shankaran; my conversations with him were one of the highlights of my trip. I spoke with first-year, second-year and third-year students in their classes. They were well-read, friendly, inquisitive and intelligent; my question-and-answer sessions with them were simultaneously exhausting and invigorating. With a wry smile on my face, I told them I was a Hindu College graduate; some of them got the joke and grinned back at me.

I console myself by counting my blessings: I live in an interesting city; I have tenure and a full professorship in a great department; I like the work I do. To use a saying I dislike profoundly: things have turned out pretty well.

—Samir Chopra is Professor of Philosophy at Brooklyn College. He blogs at samirchopra.com and The Cordon at ESPN-Cricinfo