My Name is Gandhi

For Amrita Gandhi, being Mahatma Gandhi’s great-granddaughter is as casual a fact of life as the Rs 30,000 she’s not entirely sure of spending on redoing her couch. She admires Bapu’s frugality, but it so happens that her calling in life turned out to be tracking the lifestyles of India’s erstwhile royals 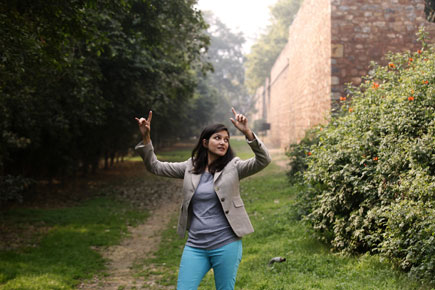 
As the shehzadi of Rampur pulls out her jewellery and tissue sari, a family heirloom, her three daughters doll up for the family portrait to be shot against the velvety folds of the backdrop set up by the photographer. Sipping her coffee and encouraging the stars of the show to look their best while posing for the portrait, Amrita Gandhi plays the perfect host. Anchoring a show called Royal Reservations on TV, on air for the past four years, she has a way with her royal guests. The Rampur royals happily— and modestly—pull out their crockery for her, lay it out on a dining table large enough to seat a 100-odd guests, and share a tip or two on where they shop for their upholstery.

Running into its fourth season, Amrita Gandhi’s show follows India’s erstwhile royals, giving viewers a peek into their well-preserved lifestyles, the royal life as it were. Called ‘Project Living’, the episode this time round, Gandhi says, concentrates on picking up ideas from royal lifestyles and contemporising them so they can inspire viewers to incorporate them into their own lives.

“The princess of Bikaner recently told me about this place that she gets her upholstery from. I have to go there, but I am wondering if I would like to spend Rs 30,000 on doing up a couch,” she says, even as she apologises for her rather modest apartment in one of the buildings tucked away in the quiet and leafy lanes of Nizamuddin East in Delhi. Incidentally, the shehzadi of Rampur is a neighbour.

As she heads off to attend to her two-year-old daughter Siya, the maid answers the doorbell. A recently published book on Mohandas Karamchand Gandhi is delivered to her. “It is for my dad,” she says, breaking away from a conversation about the contemporary tastes of the princess of Bikaner. The book, with a sepia tinted cover, is the only giveaway of her own lineage. Her father is Gopal Krishna Gandhi, former governor of West Bengal and son of Devdas Gandhi. Devdas Gandhi, in turn, was MK Gandhi’s fourth and youngest son. This makes her Mahatma Gandhi’s great-granddaughter, one of 25. This is a casual fact of her life, perhaps just as casual as the arrival of the book that lands on the couch that she is planning on doing up soon.

Taking a walk on a sunny and warm winter afternoon amid the ruins around Humayun’s Tomb in Nizamuddin, which she proudly calls the backyard of her house, Gandhi says that she is often stumped when asked about her lineage. “It is something that I have as I was born into the family. But that is about it,” she says. It does not end there, however. Devdas Gandhi married Lakshmi, the daughter of writer and independence movement activist C Rajagopalachari, which makes the latter her maternal great-grandfather. “How many of us really know who our great-grandparents are? We often only hear of them from our parents and family,” she says.

Referring to Mahatma Gandhi as ‘Bapu’, she adds, “Like most people, I know my great-grandfather, or Bapu, as we all call him, through family photographs, stories and letters.” While she remembers seeing photos of Bapu with her father, who was only two at the time, she heard stories about him mostly from her aunt Tara Bhattacharya. “ She was older and a teenager then. So she has the closest memories of him that we could have,” Gandhi says. From Bhattacharya’s stories, Bapu actually comes across as a family man who would spend a lot of time with his grandchildren.

Having said that, Amrita however admits that growing up with Bapu’s existence in the world’s consciousness was a different if not overwhelming experience. Thanks to her father’s job in the civil services, Gandhi mainly grew up in Tamil Nadu and Delhi, and studied in the United States and London. “Suddenly one would see a flyer with Bapu’s figure or something, and one would realise what it means to be a part of him,” she says somewhat sheepishly, trying hard not to sound pompous about it.

Having studied television writing and stage acting, Gandhi says that she prefers to talk about her work and not dwell too much on her family lineage. However, as she talks about stumbling upon the idea of doing a travel show on television, one about following royal families and visiting their palaces, after returning from the US nearly four years ago, she admits that she first stepped foot in Gujarat only while doing an episode on the royal household of Kathiawad. “It was funny that my show took me there. Bapu had good relations with the royals at that time and his father had been the diwan in Porbandar. That was an experience to remember,” she says.

As she goes back to sharing fantastic stories about royalty, Gandhi recounts the time she visited the royal family of Balasinor in Gujarat. Situated some 80- odd km from Ahmedabad, the area is known for being close to a rare dinosaur fossil site. “They had this fervour for preserving dinosaur eggs and fossils which was unbelievable. Even the nargisi kofta served for dinner looked like a dinosaur egg—a speciality of the royal kitchen there,” she says.

As she poses for a photograph with a buffalo cart that’s been brought in to collect mowed grass from the lawns around Humayun’s Tomb, Gandhi says that it is the ability of royals to preserve the past and yet move on with current times that impresses her. “Most of them, like the princess of Bikaner, have this innate penchant for modernising their legacy and history, which is what I respect and admire,” she says. For example, the princess of Bikaner has photographed the murals found in the old palace and framed them in her new house. “It is an idea—preserving the old in modern ways,” she says.

When asked what it is that she admires most about Bapu, it is his simplicity that comes to her mind. “Many of his belongings are preserved in several museums, yet they are so humble in number and sheer utility,” she says pensively. “Today, when one could step into any mall and buy the world for oneself, dispose it the next day and buy another one, Bapu’s simplicity and ability to live with just a few essentials is something that I admire the most.”