Desperate smoker and inveterate sufferer of that Catholic disease called scruples, the author discovered faith with the help of a few well-timed miracles and a happy, joyful God. 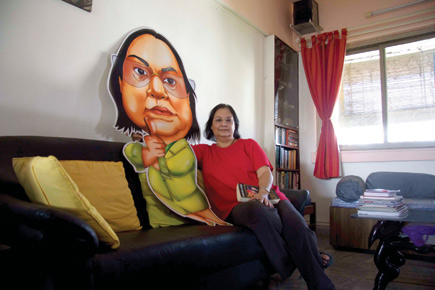 Desperate smoker and inveterate sufferer of that Catholic disease called scruples, the author discovered faith with the help of a few well-timed miracles.


Recently, at St Paul’s seminary in suburban Goregaon (sprawling grounds, sweeping drive, austere but impressive building, high ceilings, too few young men studying to be Catholic priests), my name rang a bell with the young man with whom I was speaking.

“Oh yes,” he said easily, “I remember that article you wrote on how you overcame an… addiction, I think.”

“I was not addicted to anything,” I said huffily, “and you can’t have read anything of mine lately because I haven’t written in ages.”

But he wasn’t fazed. “Oh I did,” he returned, still smiling. “You said you prayed over it. Ah, you used to smoke!”

The chap must have been around 20 and the article he spoke of was written at least six years ago for a supplement on ‘wellness’. So at 14, he had read my stuff and remembered chiefly that I had talked about the power of prayer.

But then he would, wouldn’t he, being on the way to priesthood and all and generally interested in all things spiritual. Still, he was 14 at the time.

Thing is, I remember it myself, not so much the article as the moment when it happened. Around 10.45 am on 29 June 1992. Sitting in someone’s house on a narrow couch, legs drawn up, loathing myself. I’d smoked 10 cigarettes in 45 minutes, my throat was raw, I stank, I was the mother of an eight-year-old who’d never seen me smoke and I was desperate to stop. In fact, I had stopped, several times.

I prayed, the usual inarticulate prayer of someone who is hardly aware that she is doing so, not even wanting to take the trouble of spelling it out clearly so God would hear me. After all, He had so many other things to do, including deal with the fact that the Mumbai riots were just six months away (of course He knew). Also, that my mother was going to die smack in the middle of the riots and that was a change that would make giving up smoking look as easy as breaking a promise never to sin again.

Just like that, I stopped smoking. Never felt the craving, suffered no withdrawal symptoms, got on with life. Outwardly, I was cool, amused, the humour as wry as Clark Gable in Gone with the Wind. Inside, it was another story, one that began in the morning and continued till late at night. A continuous yammering that mainly comprised ‘Thank you, oh thank you, thank you, thank you’.

God is a continuous conversation in my head and I put Him there. Miracles have kept pace with my journey through life, so that now, as I start on the last leg, I can actually think of death as the last and greatest adventure of my life.

Yet, at the ripe old age of 10, the body of faith that has sustained me for six decades dealt me such a low blow that it’s a wonder I’m not an atheist. Or at least, a screaming lunatic. For, what do you do when handed a broad set of rules to live your life in the Ten Commandments, you are also handed the barbed wire fencing that surrounds each rule with massed thickets of reasoning, arguing, rationalising and constant accusation. Me, I developed a particularly Catholic mental illness called Scruples. I am told it usually strikes those with a highly developed ability to play Devil’s Advocate with oneself. In other words, smart people. This was absolutely no consolation to a child, then an adolescent wrestling with sins of the mind, sins of the flesh, sins against the world.

Being told I was “so clever” failed to comfort me well into my adulthood. Being unable to talk about it to anyone didn’t help either.

But the miracles kept coming, so that at the darkest moments in my life, there would be a breakthrough. In college, there was Sister Carol, polymath nun, versatile in math and English. “I’ve been watching you,” she said softly. “Do you suffer from scruples?” A tremendous relief.

Then, the discovery of a saint priest, enormously fragile, filled with absolute fun as he sat in his wheelchair. In his heyday, Father Kevin Cleary had been a cricketer who could have played for the country. When he told me to “lay the whole responsibility for what I considered mortal sins” upon him, I wept. In the long dhobi lists of sins that we were supposed to familiarise ourselves with, no one had pointed out that you had to be resoundingly wicked to claim them for oneself. Kevin Cleary showed me what to do—laugh out long, double up, treat it all as a joke of the non-cosmic kind. Because Jesus Christ, he said, was a happy god and we were meant to be joyful people.

Away from him, once in Mumbai, the dark clouds settled in. I wished desperately that I hadn’t been born Christian. It was too difficult, too sad, I was unworthy. But then, there were these miracles at crucial points.

Passionately, I asked for a son for an extended family that has only girls for two generations. Pushing my luck, I asked for labour that confined itself to the morning. I asked for a Sunday baby. After two failed pregnancies.

Guess what? Right on every count.

But the scruples weren’t gone.

Then my mother died, alone in a hospital at the opposite end of town from where I lived in Mumbai. We had driven her there through a burning city convulsing in hate, and then found ourselves cut off  by violence.

My mother died and I was set free from my mental illness. Faced with the enormity of her death, everything fell into perspective. God is not an accountant. He’s the power that raises us to become greater than ourselves and become a part of Him. And this we do by emulating him in the best way we can: loving, sharing, serving others.

As a Christian, joining ever so often in the mysterious ritual of the Eucharist, where we absorb Christ’s body and blood, I still don’t understand completely. It’s like darshan. How many Hindus understand that it really goes far beyond gazing at a deity? That it is communication with the deepest part of oneself, the part that needs only to search with sincerity in order to be found.

I have also learned a curious thing—He gives you joy, and no matter when it comes or how fleeting it is, it is worth it. And I mean unreasoning, ecstatic, bewildering joy born of nothing, seizing you without warning on a day that might be sunny or rainy, clear-skied or clouded. Joy has this great quality. Even a little, following great sorrow, has the ability to wipe out your grief. And long after it lifts and you return to sadness, you remember it and know it will be yours again.

Carol Andrade has been a journalist for the last 37 years, and is currently editor of the Afternoon Despatch and Courier. She also teaches journalism to idealistic young students, and paradoxically, brings them down to terra firma.