Shazia Omar shares the shock of watching 9/11 unfold in front of her eyes and how it brought perspective in her life. 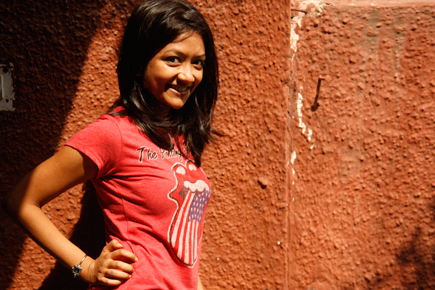 Shazia Omar shares the shock of watching 9/11 unfold in front of her eyes and how it brought perspective in her life.


I was part of the post-undergrad elite of Manhattan, earning an-almost six-figure salary a year, with an expense account, a limo service, a secretary and an expensive wardrobe of designer suits. I liked the respect it earned me. In a few years I’d have a million dollars in my bank account, a penthouse on the Upper West side, a beach house in the Hamptons, Jimmy Choo shoes and Louis Vuitton purses, what more could I ask for? My Ivy League education had landed me a chance to play in the big league, all I had to do was accept this as my path.

I bent over to lace up my strappy heels and noticed that the man sitting next to me on the subway was reading the papers, an article about Third World poverty. I tried to read over his shoulders and broke out into a cold sweat. He seemed calm and collected, detached perhaps, from the emotional turmoil that bites away at a young woman who questions her purpose in life.

Despite the ample pay cheques, I had mounting credit card bills to add to the college loans on my shoulders. I had no time to do groceries or find a husband or ponder spirituality. I knew I was on track, an independent professional moving steadily towards the financial security of a stable corporate career. I was a South Asian father’s dream come true. It was a rare opportunity for a girl from Bangladesh, but I wondered if it was the right direction for me. Did I really fit into that world of trophy wives and box-office seats at baseball games? At 21, I already had wrinkles on my forehead from staring at a computer screen all day.

I noticed two passengers staring at my legs, so I pulled down the edges of my pencil skirt. It was a navy skirt, a new purchase, an Armani from the World Trade Center shopping plaza where I often lingered after work before hopping onto the metro to go home 50 blocks uptown. I wished I lived closer, as I would be late for our morning meeting, though it wasn’t entirely my fault.

I hadn’t slept all week. I had to finish a pitch book by Friday. The night before, I had completed a set of discounted cash flows, then handed the document over to Kenny, the Black guy who worked in the basement, on the support services’ design team. He was well built and super smart and I never gave my work to anyone else. He worked on my pitches even when there were others in line before me. I nurtured his crush on me with low-cut blouses and occasional emails. In an office full of alpha males, it was nice to have someone on your team. I could rely on Kenny, though I hardly knew him. At 10 am, his shift would finish, and who knows where he’d go.

The train pulled into my stop, the World Trade Center. I stepped out and was fumbling in my purse for my Lehman Brothers ID when I heard the blaring engines of a plane and then a crashing sound. The world shook for a moment. Then there was a cacophony of screams from outside and inside the station, pandemonium erupted.

Panicked people stampeded towards the two exits. Security guards blew whistles as people shoved their way past each other. I scanned the station for signs of a bomb blast as I ran with the crowd.

Outside was chaos. Fear hung over the confused frenzy. Cars honked and swerved around screaming pedestrians. Rocks and rubble fell from the sky.

Staring up through the haze, I thought I saw a plane. I ran across the street and turned back. I squinted to keep the particles out of my eyes. I was still too close to see the top of the building properly, but it was a plane, that much I could tell, and there was black smoke billowing out of its burning tail.

I’m not sure now why I called him of all people, he was back in Bangladesh, a million miles away, but I guess the stress of that moment made me a little girl, so I called my father. I told him about the plane and he instructed me to get in a cab and go home immediately.

In the middle of all that falling rubble and screaming commotion, there were no cabs to hail down. Shielding my eyes with my hands, I stared at the plane and wondered what was happening. How could such an accident happen?

I decided to take the train out of the downtown area, go back home, despite the work on hand, and figure out my next move later. The smoke had made the air thick and it was difficult to breathe or see. I hurried back towards the station, against the flow of the hysterical masses. A huge chunk of the building fell from the sky and smashed the top of a car parked on the street in front of me. I recoiled in horror and returned to the task of pushing my way back into the World Trade Center.

The lady next to me had a crying child in a stroller and was trying to get in as well. The baby howled, and the lady, with both the stroller and a large bag, was unable to manage her way. I grabbed the child and pushed the stroller back onto the street. The lady held onto my arm and together we elbowed through the crowd, back into the building, then down the escalator into the subway station. A northbound train was parked, with open doors, and we rushed in.

The lady collapsed on the seat next to me, she looked like she might faint. The child stayed in my arms, silently trembling. As we waited in the nearly empty train, visions began to flash before me. I wondered if anyone was in the offices above when the plane crashed. Were they okay? I wondered if Kenny was still at work, working on my pitch. Had he seen the plane?

“Why won’t the train start?” yelled the lady, frantic. The other passengers eyed her with blank expressions, they had not stepped out. They sipped their Starbucks, blissfully ignorant of the plane lodged 70 floors above us.

I thought about how absurd and precious life is, how in a moment anything could happen, like a plane crashing into a building, or a bomb blast or a stampede. I whispered a prayer.

Suddenly my past worries seemed insignificant. I didn’t have to be a banker to give definition to my existence, I didn’t have to accept the beaten path, I didn’t have to make money, it didn’t really matter to me much, I didn’t have to find a husband just yet. I had everything going for me, my health and sanity, my friends and family, my education and opportunities, peace and freedom. Life was beautiful and finite, and I was lucky to be alive.

The train screeched out of Ground Zero, skipping all the stations in the financial district and onwards till it finally stopped in midtown. I stepped out of the subway station into the sun and surrendered to the universe. I could hear police sirens and fire trucks, people were running around in mayhem. Everything was NOT going to be OK.

I walked around the corner and found a crowd of people huddled outside a store window, watching the news on display televisions. I joined them and watched another plane fly into the second tower. I thought of the people stuck in the buildings, the dreams and ambitions I shared with them and how all those dreams shattered with the glass windows as the jets ripped open the building.

And then we saw the mighty ivory towers crumble. In unison, we screamed. Tears poured down my face and someone held my hand. Despite our differences in race and religion, we shared a connection. We were all New Yorkers, in shock.