A modest apartment, a borrowed Maruti 800 for outings, Mahendra Peshwa, descendant of the legendary Maratha rulers, is like any other middle-class guy. Except for that last name... 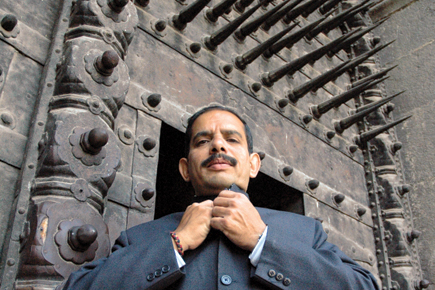 Mahendra Peshwa, descendant of the legendary Maratha rulers, is like any other guy


I may be a Peshwa descendant, but does it really mean anything in 2009? When a traffic policeman stops me today and checks my driving licence, he does not even raise an eyebrow. The name Peshwa means nothing to him. He couldn’t care less. And this, in Pune, a city from where my forefathers ruled large parts of India for nearly a hundred years.

Why just the policeman. I am a non-entity even at the Parvati hill temple, which houses the family’s Lord Shiva deity. I am not allowed to enter the sanctum to perform a puja, despite the temple being run by the Dev Deveshwar Sansthan trust started by Nanasaheb Peshwa, my forefather in 1749. Today, none of my family members is on the five-man committee and this prevents us from performing even a puja.

We have filed a case with the Charity Commissioner in Pune in 2001 demanding permanent places for at least two Peshwas on the committee, given the history of the trust. However, as is typical in India, no decision has been forthcoming from the commissioner for eight long years.

It is a well-documented fact that as the Peshwas battled the British tooth and nail, the British confiscated and destroyed all the Peshwa property in Pune, except the Parvati hill temple run by the Dev Deveshwar Sansthan.

Presently, the only property that our family owns is in far away Varanasi, where we have two small ghats and two temples, one dedicated to Lord Shiva and the other to Lord Ganesha. These temples and ghats were built by another of my forefathers, Amrutrao Peshwa, brother of Bajirao Peshwa II in 1807. I  go on an annual pilgrimage to Varanasi every winter. It is the best time of the year to visit, as the weather is cool.

Presently, my father and his brother, as direct descendants of the Peshwas get a pension of Rs 13,360 per annum each from the Government of India treasury in Allahabad. This amount is the interest calculated at 4 per cent on the promissory notes deposited by the Peshwas with the British in 1855.

According to my father, Krishnarao, the British confiscated 90 per cent of the promissory notes and all the gems and jewellery belonging to the Peshwas in 1855. We have been requesting the government to release the balance amount in the treasury or at least increase the rate of interest, but our requests have fallen on deaf ears so far.

However, in spite of all this, I am proud to be a Peshwa. Our forefathers ruled large parts of the country and it feels special to be part of a clan with so much history.

Today, I live in a modest apartment in the Karvenagar area of Pune with my wife and teenaged, college-going daughter. No luxury and riches for us. I ride an old scooter and when the family has to go out together, I use my father’s old, beat-up Maruti Suzuki 800 car. I also personally shop for vegetables, milk, bread and groceries every day.

In any case, there is nothing amiss here. The Peshwas themselves were never given to creature comforts. While Bajirao Peshwa I, did construct the Shaniwar wada, home and headquarters of the Peshwas in central Pune, not many Peshwas managed to enjoy its comforts. Least of all Bajirao Peshwa I himself. It is a well-known fact that Bajirao I,  was more on horseback fighting the enemy than relaxing at his home in Pune. Ditto with a majority of Peshwas who were always on the battlefield, fighting the enemy. Don’t forget that the Peshwa army actually went past Attock in present-day Pakistan.

I work as an engineering consultant and am an expert on special purpose machines. In all probability, you will find me rushing from one shop floor to the other on any given day, trying to attend to my clients’ complaints. Like the Peshwas of yore, no creature comforts for me, thank you. The only problem is that my clients and customers assume that I am a rich man and often tease me, saying, “You are a Peshwa, why do you need the money?”

As a child, I grew up on a diet of tales depicting Peshwa Bajirao I’s courage and valour. So quite naturally, he is my hero. Within a short span of just 20 years, he managed to take Shivaji’s concept of Swarajya ( freedom) and convert it to Samrajya (empire). Bajirao I, was the first Peshwa to take the Maratha army past Delhi and bring almost 70 per cent of India under Maharashtrian rule. He is also the only Peshwa to have never lost a battle.
Just how astute Bajirao was, can be gleaned from the manner in which he convincingly outwitted the Nizam of Hyderabad in the battle of Palkhed. A master strategist, Bajirao, with far less manpower and resources than the Nizam, managed to surround the Hyderabad ruler so completely, that the Hyderabadi ruler was forced to surrender without a drop of blood being shed.

I did my initial schooling in Bareilly, Uttar Pradesh, a cantonment town where we had several friends in both the army and the air force. Coming from the Peshwa family, it was natural for me to be attracted to a career in the armed forces. I was a sergeant in the junior National Cadet Corps (NCC) in my military school in Pune, where I was adept at horse riding and shooting.

However, certain family circumstances prevented me from actually taking up a career in the armed forces after I completed school. I regret that even today. So much so, that if given even half a chance today, I would join the army in a flash.

The present state of Indian politics is simply revolting. I don’t like the manner in which this country is being run. If Bajirao I were to visit Pune today, he would have been appalled by the traffic congestion and the utter lack of town planning. He would also be aghast at the countless loopholes that exist in our policing system. Successive Peshwas, starting with him, had put in place a well worked-out system and plan for Pune.

He would have also been hurt by the class divide that exists in Maharashtra between the Brahmins and Marathas today, created by modern day politicians. In his time, the Peshwa army was not just made up of Marathas, Muslims were also part of it.

The class divide has reached such ridiculous proportions now that when present-day Maharashtrian politicians make speeches, they fast-forward directly from the era of Chhatrapati Shivaji to that of Mahatma Phule, as if the 100-year reign by the Brahmin Peshwas never even happened. Isn’t that downright ridiculous?

I was never really attracted to politics and hence, have never harboured any personal political ambitions. However, among the many political parties in India, I would be more inclined to vote for the BJP.

Nowadays, I get true solace whenever I visit the Shaniwar wada with friends and family for the ‘sound and light’ show depicting the history of the wada and the life of the Peshwas. It leaves me with a lump in the throat every single time. Much like watching the Republic Day parade in New Delhi.