Pramod Kumar is one of the few researchers in the world who has interacted with this Andamanese tribe. He recently completed a PhD thesis on the grammar of their language 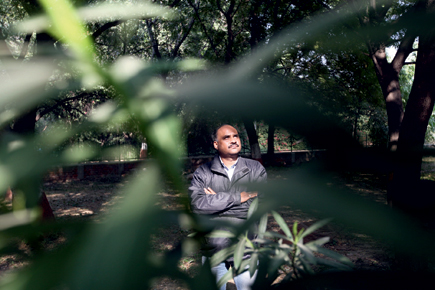 Pramod Kumar is one of the few researchers in the world who has interacted with this Andamanese tribe. He recently completed a PhD thesis on the grammar of their language


In 2000, after finishing my MPhil in Linguistics from Jawaharlal Nehru University, I went to the Andamans for a couple of days as a research assistant. This was part of a project about the languages spoken on the islands, and the Jarawa had then just come into contact with the outside world for barely a few years. We realised that there was no research on their language. My supervisor suggested that I continue working on it and I decided to make it my PhD subject—a descriptive grammar of the Jarawa language.

When I applied for research permission to the Andamans administration, there was an ongoing Supreme Court case in which an NGO and a few others were arguing that outsiders should not be allowed any contact with the Jarawa. The administration cited this case to deny me permission. My supervisor and JNU’s vice-chancellor contacted the Ministry of Home Affairs in Delhi, which finally cleared the way for me.

Towards the end of 2003, I started with a blank slate. I knew nothing about the language. Today, Jarawas, especially the younger generation, have picked up some Hindi words to communicate with local settlers. But at that time, they were completely unaware of any other language. They are monolingual even now. In entirety, they speak no language but their own.

In the permission letter I got, it was clearly mentioned that I was to only go to meet Jarawas along with the staff of the Andaman Adim Janjati Vikas Samiti (AAJVS), a department responsible for all the tribes of the islands. Another condition was that I should not disturb the daily life of Jarawas. So when they went hunting and gathering, I couldn’t go with them. Initially I was apprehensive about meeting them. They were not known to be friendly to outsiders. But my apprehensions were soon set to rest. I found that once they understood what I was trying to do, they were ready to help me.

The first bus on the Andaman Trunk Road (ATR) starts at 6 or 6.30 in the morning. I would take it along with the AAJVS staff. We would get down in the midst of the reserve. Jarawas used to stay 100 or 200 metres inside the forest along the ATR. We would walk from the road to meet them. There I would observe and try talking to them to learn their language. Whenever the AAJVS staff decided to head back, either at 12.30 or 3 pm, I had to return too. But I met Jarawas in other parts of the islands too. If they were staying along the sea coast, I would visit them by boat.

In Linguistics, we do courses called Field Methods or Field Linguistics, by which we are trained to work on any language. If you hear a foreign language, say Chinese, you can’t classify it right away as a ‘language’ because the ear is not familiar with it. In the beginning, I devoted time just to listen to them. When they conversed among themselves, I recorded it. I would listen to it when I came back to where I was staying. I tried to accustom my ears to the language. Meanwhile, I was learning words from them related to body parts, fish and animals. I did this by showing them pictures that are used in schools and other institutions. I asked them to identify only those animals that are present in the Andamans. So, I wouldn’t ask for a word for ‘lion’ since there are no lions there. If I had asked them, they would have either said something that is not in their language or everyone would cite different words. I would constantly question and observe them. If they were doing something, I would ask them what it was. Thus, I started picking up the language gradually. Then I tried to collect some tenses. I would write down words or simple sentences while they were speaking. I would also note the context—to whom they were communicating, or what they wanted to communicate. Based on research like this, I wrote my thesis.

Since I could not stay in the Jarawa reserve area on my own, I camped in the nearby settlement area of Kadampalla. The area is populated by local settlers. After Independence, when the British decided to hand over the Andaman Islands to India, it was the policy of the Government to settle people from mainland India here. Mostly, they were refugees from East Pakistan and Sri Lanka. There are many such pockets around the Jarawa reserve area. Kadampalla is one of them.

I was careful never to interfere in Jarawa lives. I always remained an observer. Otherwise there is always the danger of imposing our values on another culture. Even so, I learnt many things about them. I saw that the Jarawa shared everything among themselves. Game, once hunted, is eaten by everyone. If they like something, they take it, because the idea of personal property does not exist for them. This is often misconstrued as theft by outsiders. But in reality, it is just a misunderstanding between cultures.

They name themselves after objects like stones, snakes, etcetera, and don’t count beyond three. So, after today, yesterday and the day before, everything is in the ‘distant past’ for them. They live in huts partitioned for nuclear families. Spaces within the hut are reserved for different units. The family only includes the father, mother and children below six or seven. Past that age, boys and girls live apart in separate camps for girls and boys. Their marriages are fixed in childhood and consummated once they turn 16 or 17. But even then, they have to prove themselves. Boys have to hunt and girls have to go out and gather food before the marriage takes place.

In 2005, the administration framed a policy minimising outsider contact with the Jarawa. And so, no research can be done on them now. I last met them in 2007. The administration did not give me permission after that. When I saw them then, I told some of them that I might not be able to come back. “That’s alright,” they told me, “You can come whenever you want to.”

As told to Madhavankutty Pillai