How to Spend Your Money

The owner of one of the world’s most expensive nightclubs, where a table spend can be close to $100,000, on why creating great parties is an art in itself 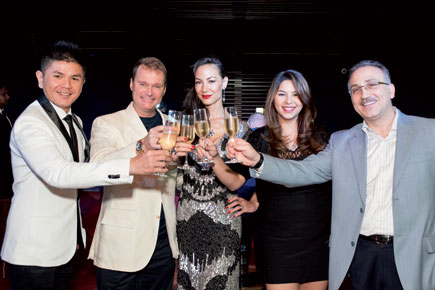 The owner of one of the world’s most expensive nightclubs, where a table spend can be close to $100,000, on why creating great parties is an art in itself


You are in a fancy Asian nightclub. The music is great, the night is young. You order the club’s most expensive cocktail. The moment you do, everything at the club comes to a halt and you become the focal point of the room. Two security guards proceed to your table, followed by the manager of the club bearing a stainless steel briefcase (accompanied by a third guard). Before you begin to wonder what unspeakable crime you may have committed, they are joined by two girls and the club’s VIP services manager. She is holding a bottle of 1985 Krug champagne. Two more girls from the staff and two more security guards bring up the rear.

The briefcase, which is smoke-filled, is opened to reveal the ingredients for the cocktail—Richard Hennessy cognac infused with gold flakes, a smoke-infused raw sugar cube with Jerry Bitters—as well as a shiny stone and silver-and-crystal champagne flute. The manager then prepares the cocktail before you. The VIP services manager tops it off with the Krug before carefully lowering the stone—a one carat flawless Mouawad diamond—in the glass by a chain.

You are in Pangaea Singapore, one of the world’s most expensive nightclubs, and the drink that you have ordered is the Jewel of Pangaea, East Asia’s most expensive cocktail, which has added another $32,000 to your tab. And yes, you get to keep the diamond.

How many nightclub owners of the past 30 years can you think of who are household names? See, that’s my point. I am 50 now. I have been designing and operating nightclubs for over three decades. Of the 30 nightclubs I own that cater to the über-rich, Pangaea Singapore is the costliest and most profitable.

Our parties are among the best known in town. To run a nightclub successfully, one needs to be not just a businessman—sure, you need somebody to take care of the books—but also an artiste, one who knows how to make the party pop.

The greats over the years were Steve Rubell of New York’s Studio 54, who changed the game beyond all recognition; Howard Stein, my mentor, who owned world-famous brands such as Xenon in New York; and Monaco’s Regine, who founded Jimmy’s in the early 1970s. She was a tough creative woman before whom every man I know would cower. She remains, to this day, the only club owner who tried to execute a worldwide club roll-out in every major city. Whether I am fit to be among these rarefied few, people will judge for themselves with time.

I have observed the nightclub culture closely for more than three decades now. My first such experience was when I was about four years old. It was a family tradition to throw parties, not so much as a business, but more for charity. My mother, Faith Van Cleef, did it, and my grandfather before that. I got a first-hand experience of how great parties were thrown. I saw the benefits of a strong contact book, and I started building mine when I was about seven or eight years old. Before I built my first nightclub in the 1990s, I was a promoter for a lot of top clubs in New York, such as Studio 54, Area, The Tunnel and Maxime’s. Post that, I created and ran nightclubs in joint ventures with other operators.

In spite of the regular socialising, I did not consider myself a party animal even when I was in my 20s and 30s. I worked on Wall Street for about six years, in Hongkong Bank, Barclays and Bank of New York. My step-father, Dean Witter, in his day, had the second largest brokerage firm in the world. But banking had no creative outlets for me. This is why I left my job as a banker and ended up partying so hard.

Today, my phonebook and email list cumulatively runs into over 1,200,000 contacts. It is a tool of indescribable potency. Imagine being able to reach out to 1.2 million of the most fashionable, fabulous, famous, interesting and wealthy people on the globe, including the world’s press, at the click of a button. Presidents, royal families, actors, musicians, sports stars. It is a remarkable position of power, and must be used responsibly. They must know you; this list in anyone else’s hands is meaningless.

Access to such an elite crowd has also meant that I have witnessed some memorable moments in my clubs. People go through an entire spectrum of emotions when they are drunk. And sometimes, you have people in the club who are really, really talented. They often go ahead and put on a show. It can be a lot of fun.

I am a big fan of Al Pacino, particularly because of Scarface. There is a scene at the end, when the character he plays, Tony Montana, says, “Have a look at my little friend” and goes on to blast through a door. One night, Pacino enacted that scene for everybody. It was brilliant. Then there was Jack Nicholson, who became Jack Torrance once again, and did a couple of scenes from The Shining. Once, Sting came in and did a 30-minute solo. I remember him singing So Lonely and Message in a Bottle.

Often you have a great conversation and don’t know who you were talking to till the very end. This has happened to me with Bill Gates.

Throwing a great party is a matter of sound judgement and skill. In the words of Steve Rubell of Studio 54, “The key to a good party is filling a room with guests more interesting than you.” Rubell was known to guard the door of his nightclub zealously and would only allow in people who he thought were glamorous enough. And it wasn’t only about looking good; he would focus on getting the right composition of clubbers, White and Black, straight and gay, male and female. He called this strategy ‘mixing the salad’.

Once inside, Rubell would ensure that A-list celebrities were showered with gifts and attention, so that they would keep returning to his club. It was a place where physical intimacy wasn’t limited to the dance floor. Studio 54 had the Rubber Room where you’d often find one or two couples having sex and a few snorting cocaine.

In my clubs, apart from good composition and personalised attention, I take pride in saying that the staff goes through a rigorous philosophical scanning process before they are hired. We aim to get into their heads. We don’t just check how fast they can get drinks to the tables. They should understand and evolve with the situation on the ground. The waitresses treat you as equals. You allow them to guide you into a fantasy. After all, you are looking to let go of your stress. At some point in the evening, the staff is able to drive you into a surreal world and the party pops. Then you become the party.

The failure rate among nightclubs is almost 100 per cent; all clubs close at some stage. Studio 54 had a 33-month run, which was remarkable. There are markets where top clubs have achieved the 20- to 25-year mark, but in my opinion, this is more a function of the market than the club. In other words, lack of competition.

Running a nightclub is a risky business, and the biggest risk is choosing the right people and avoiding the wrong, not just with respect to business partners but also the guest list. Over the years, I have had to throw out dozens and dozens of celebrities. I have also permanently banned some of the most famous actors and rockstars. We do give people a lot of leeway, but we do not compromise the comfort of any of our customers. Rockstars are treated like regular customers and regular customers are treated like rockstars.

We stepped into Asia for the first time with Pangaea Singapore. What amazes me is the sheer amount of capital here. You have rich Koreans, Chinese, old Malaysian families, Indonesians and even Indians stashing their money in Singapore. It is called the Switzerland of Asia. And even the Swiss are coming here. There is just so much disposable income.

What you spend on is not just the drink and music, but the entire experience. Take the concept of bottle service, in which people sometimes pay as much as 2,000 per cent the marked price of a bottle to have it on their table. It’s not the bottle they are buying, but the real estate of their table. Top tables are front-row seats to the wildest entertainment experiences on the planet. And, of course, when you buy a highly visible table and spend on large expensive bottles, you are buying ‘face’.

Even when you buy the Jewel of Pangaea, the presentation really is half the fun. Our celebrity mixologist, Ethan Leslie Leong, leads a parade of stunning wait-staff and an impressive security team, with sparklers through the room, while acting as the courier of a steel-sided briefcase that contains the diamond. And then the show begins. Naturally we could have artificially elevated the price with a larger stone, but in our case, the show and drink are a significant part of the experience.

Singapore is not the only market with that level of cash; there is Hong Kong, Indonesia and China too.

And India, of course. In Pangaea Singapore, our highest paying and most consistent customers are overwhelmingly Indians.

We are stepping into India this year, too, opening Pangaea at The Ashok in Delhi. I have been to the top clubs in Bombay and Delhi but I don’t think they are doing a world-class job. Although the culture here and the music is different, their parties don’t pop. People warm up at the clubs and head to the farmhouses of wealthy people, which is where they get crazier. But why would you do that? That’s what a nightclub is for. There is no reason to leave—if the energy at the club is right. Why would you want to collect people and drive off, breaking the momentum?

As told to Siddhartha Gupta