How I found my daughters 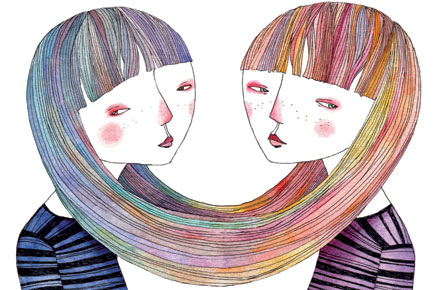 
There was no ultrasound. No gloved hand pointing to the heartbeat of a baby in the womb on a monitor. No, that’s not where I first saw my daughters. I first saw them in the news—between the city and state pages of a Hindi daily’s New Delhi edition. They were at least 10 other passport-sized pictures crammed into a tiny space with theirs. I remember reading every child’s name and then I remember coming back to the pictures of the twin girls—two smudged black-and-white photographs, taken up close.

It was sometime in 2007. I don’t remember the date. Maybe I should, but it doesn’t seem important. All I remember is two pairs of vacant eyes staring at me, and I remember looking closer to read their names—Diya and Tara, abandoned at birth in a small Delhi hospital. They were part of an advertisement put out by Palna, an orphanage run by the Delhi Council of Child Welfare. They were just about a month old then.

The advertisement was put out to try and locate the parents of the abandoned children, in accordance with a mandatory requirement to ensure that a child is legally free for adoption. It was an announcement that if no one came forward to claim the babies, they would be put up for adoption. These measures were in the backdrop of the numerous adoption rackets that had hit news headlines a couple of years earlier. As I stared at the pictures, all the stories I had read about the trafficking, stealing and buying of babies for as little as Rs 500 resurfaced in my memory.

I closed the newspaper and went to work. But the thought that had entered my head the minute I saw the girls, stayed. That night, I told the family that we were going to have twins. They said I was being impulsive, so the next morning, I left the newspaper on a table, opened to the page with the 10 passport-sized photos. It was still lying open that night when I came back from work. This time when I looked at it, I was sure. And I knew I was ready to answer all the practical questions that I had been avoiding since I broke the news to my family.

I saw the advertisement a month or so after we had decided to adopt. The decision had been taken on a cold hospital bed, right after a third attempt at intra-uterine insemination (IUI). Quite a simple procedure, really, but one that gives you a lot of time to reflect as you lie on a stretcher for the mandatory 45-odd minutes post the five-minute procedure. In my case, it was usually in a quiet dark room with the next bed almost always empty.

The decision was first taken in isolation and then reaffirmed over several discussions. There were those who embraced the idea and there were those who needed to be convinced. Some opinions mattered, others didn’t. When you sign up for adoption, you know somehow that it’s not going to be easy. The first fight is to convince people and the second is against the system. Both are tiring.

Around the time the girls had been abandoned, we had, ignoring voices of dissent, filled out an exhaustive form at Palna. Among other things, we had underlined our preference for a girl child between six months and a year old. We had also submitted our financial statements, the results of a mandatory HIV test and a declaration stating that we didn’t suffer from any ‘tuberculous infections, nervous or mental disorders and any other virulent disease.’

There were a lot of other medical reports and a proforma to be filled up by a doctor. Then there were letters from friends saying that we were ‘caring individuals, ready to take on parental responsibilities and would make loving parents.’ Finally, there was the police verification that reconfirmed our address and certified that we did not have criminal backgrounds. All quite similar to the checks done when one applies for a passport, actually.

The file, with numerous photocopies, was submitted to Palna. That ended step one. The next step was a house visit by officials from the orphanage. This was one thing that needed a lot of planning since my husband and I worked in different cities. So schedules were matched, and finally, the adoption officer came home.

Lorraine was quite unlike what we were expecting. Quietly, she prodded us, asking us about our families, trying to gauge if we were ‘ready to adopt’ and our families ready to accept. Then she told us what to expect, mostly through examples of families that had adopted kids, and the challenges they had faced. She told us to remember Krishna’s story, saying it would come in handy later. Then she left, warning us that it could be a long wait.

That was that, till I saw the advertisement. The exact thought that invaded my mind on seeing those photographs was that the sisters would always have each other, no matter what. And so, after a bit of back and forth, I hesitantly called Lorraine and asked her about Diya and Tara.

I wasn’t going by the rulebook, which stated that the agency would choose the child they thought suited the prospective parents most and introduce them. I was asking about specific children. The voice at the other end was cautious. It wanted to know if I was asking about both girls or only one. When I said both, the caution was replaced by urgency.

For months, they had tried to find parents for Diya and Tara, tried to convince prospective parents that separating the twins was not a good idea and having two daughters not such a terrible one, and then they had stopped talking about it—till I called. They asked for some time and said they would call back. It had been six months since we had first applied. When Palna called and said they were ready for us to see the girls, in early 2008, I remember being nervous.

Nine months of pregnancy, I assume, gives one some time to plan things—think of names, organise a baby room, put in a request for maternity leave. The thing with adoption is that no matter how hard you try or how organised you generally are, the uncertainty of the entire process just makes you nervous all the time. For starters, the agency itself tells you about the long waiting list of couples wanting to adopt kids. Then they go into details of sex ratios, health issues of abandoned children, and it all slowly starts adding up. You spend the longest time not knowing, and then suddenly one day, right in the middle of your mundane routine, they call to say they’ve found you a baby. Just like that.

Come tomorrow, they said. Give me a week, I said. A frantic phonecall to my mother, a hurried list of essentials for a baby and loads of advice on how to childproof your house finally made me less nervous. We were ready, rather as ready as we would ever be.

The waiting room at Palna was a busy place. Bundles of donated clothes waiting to be sorted, rations stocked in a corner and a telephone that rang endlessly. Right across the office building, separated by a lush carpet of green grass was the crèche, where the children apparently were. It was out of bounds for parents.

A doctor came out, followed by a caretaker. In their arms were two little girls bundled up in woollens—our daughters. We named them Sarayu and Reva. They were seven months old. As we held them, the doctor rattled off information. He mentioned the babies were born premature, had low birth weight and one of them had a bout of severe jaundice at birth. We were then allowed to take the girls for a medical check-up. And then, we could take them home, with their eating schedule and a list of a handful of medicines.

In a system where the wait for most is very long, many would say we were lucky to have got the girls within a year of filling out the forms. But it wasn’t over. We were not yet parents, just guardians. The courtroom drama was still to start. The first problem was the fact that we were adopting two girls. For Indian citizens who are Hindus, Jains, Sikhs or Buddhists, an adoption is finalised under the Hindu Adoption and Maintenance Act of 1956, which does not allow a single parent or a couple to adopt more than one child of the same sex. In 2012, the Bombay High Court ruled that a second same-gender adoption was okay. But in 2008, it was not.

In our case, the adoption was eventually finalised under the Juvenile Justice Act. This meant being physically present, with the girls, in Room No 301 of the Tees Hazari courts in Delhi. As with all things legal, it was a long process, involving, in our case, two sets of lawyers, two affidavits and two court appearances. Then there was the wait for the birth certificates, which finally declare that you are the legal parents and gives your children inheritance rights. By the end of the whole process, the girls were nearly two years old.

Now, they are almost six. And very often, during storytime, when they are tucked into their beds with a book, I tell Reva and Sarayu the story of Krishna—how he was born to Devaki and brought up by Yashoda. Lorraine had told us it would help. But the questions are relentless and the whys neverending. The answers are always difficult, especially when there is a bear hug and an ‘I love you so much’ attached at the end.