This Tinseltown’s most prolific reporter works out of Patna. How does he go about doing his job in a state of absence? 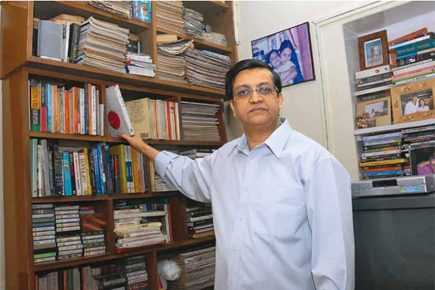 Tinseltown’s most prolific reporter works out of Patna. How does he do that?


There are two questions that I’m frequently asked about my work. The first: ‘How well do you know Amitabh Bachchan?’ And then, ‘How do you do it from Patna?’ I respond with laughter and a casual oh-it-is-nothing shrug. Honestly, though, the question—how the hell does a guy from Patna become a Bollywood journalist?—has no easy answer. It seems as impossible as being a cricketer from New Jersey or a Gandhian from Afghanistan. After so many years, I still wonder with much gratitude and bewilderment how I did it.

Without meaning to sound persecuted, I must say truckloads of heavy obstacles have been placed in the journey to where I stand today (wobbly, shaky, but nonetheless a place that I can call my own). The hysterical limit of malicious competitiveness reached a couple of years ago, when a vicious smear campaign was started against me by a disgruntled showbiz personality who didn’t like what I had written. Jubilant journalists in Mumbai saw this as a golden opportunity to get rid of my presence among their ranks and joined the mob that tried to bring me down. Loathsome emails and threatening calls (originating strangely from Delhi) describing unmentionable things they would do to my family kept me in the news for a week.

Not for a second did I think it was time for me to slink away into semi-retirement and write my memoirs on hobnobbing with the stars (God forbid!). The hate-SKJ campaign died down as suddenly as it had erupted. That’s when I realised the truth about why and how I had survived in the dog-eat-dog (and bitch-meet-bitch…at a high pitch) world of showbiz. The stars believe in me.

This is very hard to do when the journalist you choose to trust happens to write in any number of newspapers and can contort, if not concoct, the context of your comments. Miraculously, I’ve earned their love and respect. No two ways about it. Or, maybe, there are two ways about it. For, I love them back with a gusto, vigour and sincerity that is unquestionable. While the rest of the fraternity looks on the stars as news, I try not to let the newshound in me take over.

I don’t tire of saying this. And I never will. I’d rather be a good friend than a good journalist. On umpteen occasions, stars have taken me into confidence on sensitive issues. I’ve kept mum at the risk of newspaper editors accusing me of being loyal to the wrong side. To me, the scribe and the star do not occupy opposite sides of the fence. Respect their trust and they reciprocate in abundance.

There have been numerous instances when stars have told me their traumatic stories in trying times and have asked me to write about it. A young, spirited and very talented actor, whose marriage is going through a bad patch, shared his problem with me in what I thought was strict confidence. He surprised me by asking me to write about it. “Perhaps it will help my wife to see sense,” he concluded hopefully.

When singer Adnan Sami’s recent domestic problems erupted, I wasn’t sure if he was speaking to me as a friend or a journalist. It was Adnan who put me out of the dilemma. Quite often, I misconstrue star confessions as being too personal for public display—only to find the story out two days later. Fair enough. I’d rather risk losing a story than a friend.

My experience shows a good film journalist is one who embraces the acutely-entangled and complex minds and lives of the stars and then unravels layers and layers of complexity by writing selectively and discreetly about their lives. In this way, a relationship develops between the star and the journalist over a long period of time, stretching into storeys that go much higher than momentary stories.

The trick of winning the entertainment industry’s confidence is to not consider them entertainment. When Raakhee Gulzar and Sushmita Sen’s infamous Bengali temperament manifested itself in cloudbursts of tears, I didn’t run for the tape-recorder.

I stood and listened.

This is perhaps an old-fashioned way of looking at the long and troubled star-journalist relationship. As my friend Saif Ali Khan once asked me: “The lion cannot befriend its prey. Since you choose to do just that, what do you eat?” It may be foolhardy to win the confidence of the very people whom my profession demands me to betray. But it works for me. When I was in distress, the first phone call that came was from the timeless and beautiful Hema Malini. And the phone never stopped ringing. Hemaji epitomises the positivity that has kept me going in spite of efforts to downsize me and show me my place. Though she doesn’t remember it, I saw her for the first time at age 12 in Trinidad, performing live on stage. That wide-eyed awestruck boy from the West Indies hasn’t changed.

To this day, I remain completely and unabashedly star struck.

Contrary to the cynicism that’s heaped on the star fraternity these days, I’ve looked on the stars with the highest regard even in their most fallen, fallible and vulnerable moments. I’ve had stars open their hearts and wounds to me. They’ve bawled like babies and howled like hyenas in pain after heartbreaks and flops. I’ve had stars telling me about their bigamous secret weddings and sexual slip-ups on location. I’ve stored it all away. At a place where no trespassers are allowed. Not even me.

Sajid Khan once told me the stars fear me. Every time I call, they’re left with no choice but to answer my calls. Jaya Bachchan had a simpler explanation for the accessibility to stars that I’ve acquired a reputation for. “Because you live far away from Mumbai, they feel safe talking to you. It’s a false sense of security created by distance.” Recently, after we had one of our periodical heart-to-hearts, I reminded her of her observation and she completely changed her stance. “Oh, that was in the initial years of your career. Today, it doesn’t matter at all where you are. It’s the era of quick and easy communication. So that safety-in-distance theory just doesn’t work anymore.”

So why do the stars talk to me when they can’t see me, when I can’t promise them covers and when I have no control over editorial decisions in newspapers? There are many SKJ-related misconceptions that have been allowed to flourish. People believe that a major chunk of my 12,000-words-a-week comes from a slew of subordinates who write for me while I wield the whip from my throne. Wrong! I write every word myself. And the entire output comes from the rapport that I’ve established with the stars over many years. How did the star contacts happen? Frankly, I’ve no clue. They just … happened. I made no effort to seek them out.

To this day, I remain clueless about what works for me as a film journalist, and why. With many of my closest friends in Bollywood, I share a blow-hot blow-cold relationship. One day, you’ll see Ram Gopal Varma bitching me out on the blog. The next day, we’re back together, bitching the whole world out. Kitne ajeeb rishte hain yahan par…, sang the the peerless Nightingale Lata Mangeshkar in Page 3. No song better captures the ambivalent spirit of the entertainment industry.

Every time the stars descend on Patna, they make it a point to come home for a meal. Gulzar saab and Raakhee Gulzar (separately) , Asha Parekh, Madhavan, Raveena Tandon, Shilpa Shetty, Manisha Koirala, Suniel Shetty, Divya Dutta, Raj Babbar, Sudhir Mishra, Manoj Bajpai and many others have come home. But the proudest moment for me was when my absolute favourite, Shabana Azmi, came home. It was a dream come true. But then, such is my life. A dream come true. I used to dream about meeting the stars. I never knew they’d come home to me.

There’re no permanent friendships and animosities in the industry. I recently realised this when the mercurial Kangana Ranaut, who had sworn she’d ‘never’ speak to me, accepted my olive branch. Maybe I caught her at a vulnerable moment. Or maybe the arc-light was shining on the wide stretch of moral values at just the right angle. I am sure glad to have Kangana back in my life. Until the next time I write a story that snatches the beam of light away from the larger picture.