Blood in the River

The Yamuna is dying. Restless and troubled, artist Inder Salim cut off his finger and threw it into the river. Call it art, call it angst, but he forged a link with the river. 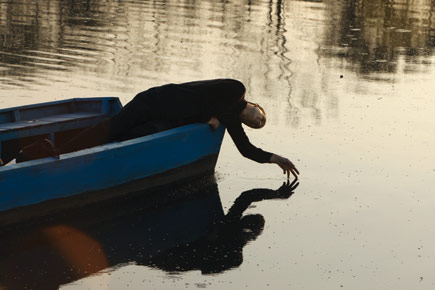 The Yamuna is dying. Restless and troubled, artist Inder Salim cut off his finger and threw it into the river.


One hot April morning, I chopped off the little finger of my left hand and threw it into the dead river called Yamuna. They call me crazy. But I call it art.

It was the year of the Gujarat riots and I remember the searing April wind. My poster was up on the buses and walls of Delhi and Gujarat. Though the poster was well received by art lovers and the public, questions about the inadequacies of art and its relevance in our troubled times were gnawing at my heart. Though I had done some performances in galleries, I was faced with a kind of void. Art-wise, I was unemployed.

The environment was a fringe subject in my art, though I crossed the dead river every day—twice a day—on my way to Connaught Place to earn a livelihood. Yet, slowly, it was making its way into my consciousness. It came to symbolise a sort of no-man’s land like Kashmir or Gujarat—like two countries hostile to each other, yet interacting with one another. But transactions do occur, which is why we make bridges. There are many bridges across the Yamuna in Delhi. But what is a bridge exactly? Was I transporting my entire being across the river every time I crossed it? That year or this year, I still don’t have an answer.

This is the modern age. We are living in a world that is technologically advanced. Yet, hundreds of species are disappearing all the time. The earth is dying every day, without any of its vital, life-giving forces being restored. Why does it have to be so? Who is the culprit? Is it an ‘other’ separate from us and easy to point fingers at, absolving us of all responsibility and guilt? Or, perhaps, it is us. If so, how do we cure ourselves of this?

One evening while returning home, it struck me that an element of my being falls into the dead river every time I cross it. I believe this is universal—every human being has that element. I decided to create a bridge, a small metaphysical bridge, to connect my being with the river. On a hot Sunday morning in 2002, I went to the Yamuna with some of my close friends. Like an engineer going to make a bridge, I had with me a surgical knife, a bottle of Betadine, some bandage, cotton, a drawing board, video and still cameras. I amputated the little finger of my left hand and threw it into the Yamuna, building a bridge between myself and the dead river. I titled the performance Dialogue With Power Plant, Shrill Across A Dead River.

The pain was extreme, blinding out memory. I escaped some of it with local anaesthesia. When I returned home, there was an ugly stump on my left hand. But my heart was full of something beautiful. It took a few weeks of treatment before the hand healed. But the heart was whole, almost whole. How alone I was, grappling with the truth of my own body, my being. I have no language to put it in words. No memory really remains, not even of the bodily pain. Only that stump of a finger stands witness to that April morning by the dead river. And, there are some images—some photographs and video footage.

I think I managed to construct a small metaphysical bridge for transporting that part of my being which couldn’t cross the bridge in a bus or auto-rickshaw. In the process, I mixed pain with pain, dead with the dead. I guess I gave birth to a personal relationship with the dead river. I saw how the stinking dead murky water of a river is, in fact, an extension of our own pulse.

The voices of all the extinct species can be heard in the silence of its dead water. I saw the enemy within. I saw how we make excuses to get rid of ‘dangerous’ tigers when we wreak far more damage than these beautiful creatures can ever do. I realised how selfishly we have been living on this planet. On the one hand, we have developed skills that make us the most intelligent species on earth. And yet, we are at a loss when the question of environmental degradation is put across the table.

What is the meaning of development? It’s not just planting a tree when we feel guilty about our way of life. It’s much deeper. It is political. It is about social justice. About restoring ethics and morality to our systems of thought.

That year, I realised how small we really are. The fact is that there cannot be a long-lasting bridge that can help us cross this temporal Vaitarni (mythical river of hell). The whole world is in the process of becoming a dead river and we have to do something urgently to return it to life. Never in the history of mankind has there been such a crisis. Everything, even aesthetics, demands a fresh outlook.