In an unexpected twist, this enthusiast saw his rafting trip on the Zanskar turn into a struggle for survival against floods and landslides. Passing by wreckage of bad weather, he realised the violent river was the only way to safety. 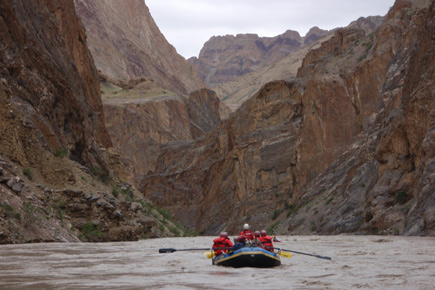 In an unexpected twist, this enthusiast saw his rafting trip on the Zanskar turn into a struggle for survival against floods and landslides. Passing by wreckage of the weather, he realised the violent river was the only way to safety.


Captain Gunpal Rawat, the raft leader, put his thumbs up and signalled the end of our treacherous five-day rafting trip in Zanskar valley, Ladakh. A big smile broke on his face, and we all breathed a collective sigh. He had smiled like that for the first time in five days. That smile meant that we had finally emerged unhurt from the most volatile portion of the Zanskar river, conquering both the elements and the terrain. And so, at a time when people were dying all around us. Our team mantra—you giveth the river what you want it to give back to you—had brought us to safety. We were alive. All 12 of us.

It was on the second day of our rafting adventure in Zanskar valley that our fates took a wrong turn. Bad news came from Leh of a deadly cloudburst. More than 130 were dead and 200 missing, we were told. Scores of trekkers and mountaineers touring the mountains in the region were either stranded or feared dead. Ladakh had been struck with its worst tragedy ever, and we were right in the middle of it.

Our team—two kayakers, two rafting experts, six paddlers, accompanied by a cook and a helper—sat huddled in a soaking tent watching the rain attack the mountains. The paddlers included Peter Barton Smith, a British gynaecologist and much-travelled climber, who would discover on his return to Leh that he was on top of the list of missing people. It included Sarah Davidson, a UK-born mental health nurse from Australia who was a last minute inclusion on the expedition. Gouri Jadhav, a Pune-based infotech banking professional, was the third paddler. Fourth and fifth were Chittaranjan Savadi and Sachin Maheshwari, two strapping insurance professionals from New Delhi. The sixth was yours truly. Rawat and Tara Kishore, our raft captains, handled the main oars, while Jeevan and Jangu from Nepal manned our kayaks. Balbir, who feared the water, was our cook from Garhwal, and Dheeraj, the all-round helper.

We were camped about 100 km from Leh on a remote shelf above the violent Zanskar river and below the towering hill of Nyerag, waiting for the bad weather to clear, when a huge chunk of the landscape on the opposite end of the river gave way, bringing down huge boulders into the river. A dense cloud of dust hung over the seething river. We shuddered. It seemed Zanskar, the valley of Gompas, had woken up, and that too in anger.

In minutes, our rafting adventure had turned into a thin red line—one that blipped dangerously. If a similar rockslide happened on the camp side of the river, our tents would become our gunny bags. We cringed and crept into our sleeping bags for the night. With bated breath, we prayed for the morning to bring safety.

Tethered below in the river were two oblivious rubber rafts bouncing happily against each other in the pouring rain, waiting for another rendezvous with nature. The river, perhaps they knew, was the only way out.

The morning came, with thankfully no rain, and the 12 of us attacked the swollen river with renewed fervour. We heard from our guides that people were dying in the vicinity, and the water was going to throw up unknown challenges during the rest of the course. Under the command of our raft leader, ‘team work’ changed its meaning. Any slack, and all would be lost. The river beaches, meant for camps, had been washed away. There were no roads. The river was our only escape route. However, the river was full of unknown rapids. The bridges that were to be gateways for us to pass under had turned into hanging nooses, as we narrowly slid under them. Overhead, we heard the drones of Army helicopters carrying out sorties from Leh to Srinagar. On the raft, though, there was eerie silence.

That evening, we reached Chilling—the first sign of civilisation on the river after 65 km of steep gorges and challenging waters. The same mountainscape had been described by the famous Scottish travel writer Bill Aitken thus: ‘It has the ability to stop a trekker in his tracks and allow him to gape disbelievingly at the glory of nature’s art.’ In our case, the art seemed transformed into a rippled tombstone. If our raft flipped, the silica-filled freezing water would choke our lungs in a matter of seconds. Our only choice was to follow our captain’s command, and paddle for life.

Thankfully, we managed to stay on our rafts the entire stretch despite numerous attempts by the river to dislodge us. There were hours of tireless paddling and oaring that negotiated numerous level 4-5 rapids (in rafting parlance, a level 6 rapid would be schlepping over Niagra Falls). ‘Macho trekkers and rafters should remember that it is not the strength of the current that counts but the freeze level of these killing streams,’ writes Aitken of the usual Zanskar rapids. But this was Aitken country no more.

We saw trekkers on the mountainsides with their unassuming and burdened ponies slipping and sliding off rockslides. A couple of French tourists stuck in Chilling came asking for ‘a seat’ on our rafts. Without extra lifejackets and space, we had to decline. Later, in Leh, we would hear that some of the people we saw trekking up in the mountains had perished. Thirsty local villagers, stuck in the remote pockets of mountains, came to us and hurriedly gulped down drinking water from our jerry cans. Their smiles and ‘Juleys’ (greetings), which would otherwise light up the whole Ladakh valley, were replaced with exhaustion and worry.

Their home, Zanskar, was certainly India’s least known province, and had never known such tragedy before. There were only two routes to get into the valley. The first, a motor road running some 150 km southeast of Kargil through Pensi La (4,440 m) into Padum, a Buddhist Gompa settlement. The other was from Keylong in Lahaul, along the Manali-Leh road.

Bad weather had shut down both these routes. We were trapped in the middle, on the river. It rained heavily again that evening in Chilling. Our team guide Tara Kishore finally spoke of the danger ahead. “Shall we stay the course on the river, or wait for the roads to open?” he asked. Our next and final stop, Nimmo, was more than 35 km away on the river, but the river had turned into a monster. The signs were all ominous. We decided to stay put in Chilling for another day.

But in our hearts, we knew that all was not over until we got to Nimmo. And our fears were confirmed as soon as we got on the river the next day. We had to endure the most violent of rapids, which chilled our bones. They came one after another, without a break, churning our rafts and bending the oars. All our captain could tell us was to stay low within the raft and let the river take its course.

Finally, on calm water, we heard the freezing river growl under our sore behinds and over-paddled torsos. Respect was what we had for the river, and life was what we got back.