When Mohammad Adil Hossain was banned from campus on charges of ‘internet activism’, he promptly took his university to court, and argued his own case. After a harrowing ten-month legal battle, he is back on campus 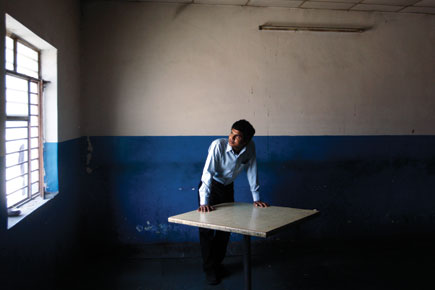 When Mohammad Adil Hossain was banned from campus on charges of ‘internet activism’, he promptly took his university to court, and argued his own case. After a harrowing ten-month legal battle, he is back on campus


On the morning of 4 June 2010, I was informed that I had been suspended by my university and banned from campus because I had allegedly ‘tarnished the image of the University by resorting to and misusing the internet’. That left me in the rather desperate situation of finding rented accommodation without any notice. My parents were angry, and blamed me for the fiasco. My friends couldn’t believe that I had been suspended for expressing my views on the internet. That too by a central university with a long history. This hadn’t happened before.

Newspaper reports forced the Aligarh Muslim University (AMU) to issue a press release defending its action of suspending me for online activism. Time and again, I asked the office of the proctor to show me the evidence that formed the basis of my suspension. The discipline committee hearing was held without such evidence and I was accused of adopting a ‘recalcitrant attitude towards the majesty of the law of the land’.

I was told to move court if I wanted evidence. I knew the discipline committee decision would be a harsh one. But this exceeded my nightmares. I was issued a migration certificate, and a campus ban was imposed on me. It meant I had been rusticated and banned from campus. That I couldn’t enter my campus hurt me deeply.

I filed a writ petition at the Allahabad High Court on 28 August, challenging the university’s order. I have never hesitated to speak up against the violation of freedom of expression and lack of political space at AMU. In the past, I had used the RTI (Right to Information) Act to question the suspension of student union polls, expenditure of student-related funds and many other issues.  This wasn’t going down well with the authorities. I was among the few students who took a strong anti-university stand when SR Siras, a Marathi professor, was suspended after it became public that he was gay.

After I waited for the court hearing, I visited Delhi to meet student activists, civil rights activists and alumni of AMU. Though we talked about online petitions and signature campaigns, we realised no real breakthrough was possible unless I started a campaign that was based in my university. It was no easy task; AMU students had already gone home for their summer break.

My grand hope was that the High Court would quash or stay the order by the university, since my right to freedom of speech had been so obviously violated. But my faith in the legal system was misplaced. The Allahabad High Court refused to entertain my case and directed me to approach the executive council of the university for relief.

And so, I appealed to the executive council. On the very day that the council was meeting to decide my fate, I was at Jadavpur University in Kolkata. Students of the arts faculty had invited me to talk about campus democracy. Though support from student groups kept my spirits up, all I really wanted was to get back to my campus. But as I had feared, the vice-chancellor and his team went ahead.

When I filed my second writ petition at the Allahabad High Court, I was in desperate need of a favourable order. And it had to come before December 2010, which was when my third semester exams were scheduled. Again, I was in for a disappointment. The case was listed for hearing a month later. As luck would have it, on the day of the hearing (29 November), the judge had to leave by noon and he gave instructions that all cases listed would be heard during the first week of January. I lost all hope. My only chance now, my lawyer said, was to file another listing application to the Court, attaching my exam schedule, and plead the case myself to emphasise my desperation. I agreed. Pleading for an early date, I stood, nervous as hell, before the judge, next to many lawyers. Only my case was listed for the next day. I was ecstatic.

That night, I was both excited and scared, wondering if I would be able to defend my case well. I studied my case thoroughly. I read up on cases of freedom of speech and expression. I looked up judgments on sites such as indiankanoon.org. I read about a case in Kerala where a college student was rusticated by the principal for holding a placard in front of his office. But the High Court had agreed with the principal’s decision on grounds that students had to maintain discipline. So that didn’t help my case.

Since quoting Supreme Court judgments from other countries is allowed, I made note of a case from Des Moines, where a student was suspended for wearing a black arm band to protest the Vietnam War. The US court held that the country’s constitutional right to freedom of speech does not end at the school gate. I quoted that. There were other judgments that I noted down. I also discussed the case with my lawyer and friends.

My day in court arrived. It was 3 December. The university counsel wasted no time in flinging allegation after allegation at me. Already, I was beginning to get emotional. I was overwhelmed. I was standing in front of a judge for the first time. My legs were trembling. At one point, I couldn’t help shouting, “I am innocent. I am innocent.” A lawyer from behind patted me on my shoulder and advised me to stay calm. Don’t irritate the judge, he said. The university counsel was doing everything to provoke me. When I asked what evidence they had against me, the counsel pointed to the university’s chargesheet. My contention was that the university had not followed due procedure before rusticating me. The judge complimented my research. My references to laws and judgments showed that I wasn’t a non-serious student, he said.

The university’s counsel asked that the case be referred back to the university. That was when I lost my cool again. I pleaded with the judge not to allow it. How could I expect justice from an authority that had treated me unjustly? The judge asked me if I knew what the principle of necessity was. I didn’t.

The judgment date was fixed for 14 December. Before announcing the date, the judge gave some reason to cheer. He first wondered aloud if he should pass the judgment on the 13th. Then he said “13 is an unlucky number, don’t you think? I will give my judgment on the 14th.”

When I came out of the courtroom, the lawyers congratulated me. They also told me that in cases pertaining to universities, judges prefer to put the onus on the university to resolve the issue. And so it was.

In referring the case back to the university, the judgment said: ‘The petitioner may have acted in a manner in order to protest against the illegal acts of the University and which may not be personal or motivated but that conclusion could have been arrived at only after the entire evidence was made available and the petitioner was allowed his complete defence.’

I immediately submitted a copy of the judgment to the university. A fresh inquiry was to be initiated and completed as expeditiously as possible or within eight weeks.

At the discipline committee inquiry on 3 March 2011, I refused to accept the allegations against me or apologise. As the matter had gone to court, I insisted that the charges be proven on legal grounds. The recent restoration of the students’ union in the university also helped. The students’ union  wrote the vice-chancellor a letter to resolve my case fairly.

At last, on the recommendation of the discipline committee, the Proctor revoked my suspension on 7 March 2011. This allowed me to get back to my hostel. I was welcomed by my batchmates and friends with great enthusiasm.  I had to assure my parents that I would be careful and would focus on getting my degree first.

Last week, I got permission to attend fourth semester classes. I lost out on my last semester. I am now insisting that the university hold a special third semester examination for me.

Being a student of journalism, I am proud of the fact that the authorities fear my writing so much that they wrote the following words in my revocation order. (It reminds me of the archaic sedition law of our country): ‘Mr Mohd Adil Hossain [stands] strictly warned not to write anything that may be defamatory, derogatory and detrimental to the institutional reputation of the University and its administration in future.’

(As told to Pallavi Polanki)