A Child Without a Country 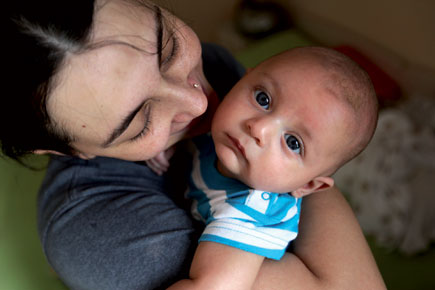 
It is about four in the morning, the monsoon rains are beating against my window, and there is a small boy sleeping by my side. Despite being two months old, he owns things. He has the basket in which he sleeps. He has a vibrating green chair with a plastic monkey hanging from it. He even has a tiny bit of money; far less than the son of a politician, or a stockbroker, but more than the countless infants around the world who die in their cradles of malnutrition. One thing the boy does not have yet, however, is a country. Maybe a better way to say that is: no country, and no culture, has him.

My son, Liam Satish Hayden, was born in Mumbai’s Breach Candy Hospital on 4 May 2013. It was an early afternoon C-section. When the nurses wheeled him out of the operating theatre, I chased after the boy, scared that someone was going to swap him for another one. When I finally tracked him down to the nursery, I realised that it would be a difficult mistake to make.

Liam was the only baby on the floor born with blue eyes. His skin tone, which to an outsider could have possibly looked Kashmiri, could have also passed for Italian, Spanish or Arab. In short, he looked human, but not like any particular human. A few days later, during check out, the head nurse, who pronounced his Western name with a delightful South Bombay lilt, gave me a series of forms to fill out for his birth certificate. They were in Marathi. I needed a line-by-line translation to get through them.

Apparently, this discrepancy has temporarily shut the entire documentation process down. The people at the government office need more time, they tell me, to figure out exactly how to process such a peculiar thing. So, for the time being, Liam Satish Hayden is nothing more than a generic citizen of the world. And that actually feels like an appropriate opening to the boy’s mostly unwritten story.

Liam’s mother Aadya is an Indian citizen, and I’m American. Aadya’s late father Satish, for whom Liam received his middle name, grew up in what is now Pakistan. Satish’s father fell in love with an Englishwoman while studying law in the UK, and when the woman’s family found out she was dating an Indian man, they apparently disowned her. The couple then moved to Lahore, where they had Satish. When the bloodshed of Partition erupted, Satish was only seven, and the young, interracial family fled to safety. They hid in the home of a generous, politically impartial Muslim family on the road to India’s Punjab, where they ultimately settled. Years later, Satish met his wife Anjula in Jaipur while acting in a stage-play together, and fathered two daughters. The youngest of whom, Aadya, eventually became my wife.

Aadya looks Indian enough in a sari, but because of that light English skin she inherited, offset by her somewhat severe North Indian eyebrows, she could just as easily pass for Persian or North African. When we lived in America, she used to take on Middle-eastern roles in stage-plays and television shows. In fact, I don’t ever remember her playing her own kind.

The first time I met her, she was an actor in the graduate acting program at University of Iowa, and I was in a writer’s workshop, studying playwriting. The first words out of my mouth were, “Excuse me, are you Arab?”—to which she replied with an empty stare. Eight of every ten people you’d see on the streets of Iowa City had blonde hair, and I guess I was happy to find someone who looked a little familiar.

My own mother, Magda Antoun (now Hayden) grew up in Heliopolis, a suburb of Cairo, Egypt. Part of an underreported Catholic minority, she was the firstborn of three siblings—a fourth child died in an accident as a toddler. My mom was 18 when her father and mother fled Egypt in 1968. A confluence of mayhem and violence had descended on the Antoun family in the year preceding their exodus. The Six Day War with Israel had left a trail of bloodshed across the region. Also, a radicalised Islamist revolution was brewing, and the homes of many Coptics and other Christians became targets of bombings. So, the Antoun family fled to Europe, but finally wound up in the New York neighbourhood of Woodside, Queens.

Six years later, my mother met my father, a White man with blond hair and blue eyes, of mostly English heritage. The Haydens were also Catholics who probably fled to America seeking freedom from some horrific religious persecution centuries earlier.

Looking at little Liam in his basket, it is difficult for me to view him in terms of any specific cultural identity.

Because, while his Indian birth certificate will ultimately be filed and while I will undoubtedly switch it to an American citizenship before we move back to New York one day, none of it will change the fact that he is born of parents with two different passports from two different parts of the world.

In terms of ethinicity, the boy is American/Indian/Egyptian/English, which is convoluted to the point of defying explanation. As far as religion goes, we are going to roll the dice on raising him simultaneously Catholic and Hindu, a compromise that defies the basic tenets of both faiths. Given the fact that both families fled death over religion, it seems like this is the only decent thing to do.

It is inevitable that the lasting legacy of the young men and women who have left their countries to work or study abroad, as my wife did in college and as I have done now, will always appear in the form of babies like Liam. In fact, given the clichéd ‘connectivity’ of the post-internet world, and the accessibility of air travel, children can easily be crossed and re-crossed along innumerable national, ethnic and religious lines.

We live a time when cultures are shedding what once made them singular. Consider the ubiquity of Hollywood blockbusters, fast food, the chaotic struggle against global terrorism. It’s easy to see how deeply our greatest traditions are being eroded by similarities. That’s not to say that there won’t be religious fundamentalists, race supremacists or nationalists in the future. Look at my mother’s Egypt right now: when power is fought over, the voices of antagonism only grow louder.

But in the broader scheme of things, if multiple nationalities have diluted our cultural identities, how willing can we be to fight in gory wars? If we grow up in a family with multiple faiths, how eager can we really be to die for some god or another?

Given the cross-pollination of violence that brought Liam into the world—the fleeing, the translocation, the persecution—maybe the inevitable dilution of national, religious and racial lines might not be such a bad thing. In fact, maybe it’s the only thing that can save us from ourselves.