A Campus Shooting in Texas

It is something you typically read about in newspapers. Deepthi Murali, an Indian student in the United States, got a first-hand experience of what happens when a gunman runs loose on campus 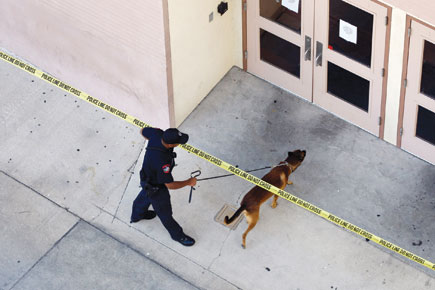 
I study at the University of Texas at Austin, one of the most popular public universities in the US. With some 50,000 students, it is almost impossible to feel lonely around here. On 28 September, Tuesday, I walked over to campus earlier than usual, a little before 6 am. The 15-minute walk is usually spent talking to my mother in India, and that morning was no different. With my bagel and coffee in place, I sat down in an empty studio to work on my assignment for a while before the day officially began. Soon, a classmate, a pleasant girl whose liberal roots can be seen in her funky hairstyle, walked in. Pleasantries exchanged, we delved back into work.

At around 8.15, I heard my cellphone beep a text. It was the university alert system. It said, ‘Armed subject reported last seen at Perry Castaneda Library on 09282010 details to follow’. I did not worry about it since I had gotten used to the idea that in the US, alerts over what we Indians would consider nothing are commonplace. (Last month, we were alerted to stay indoors for what turned out to be a storm, the kind you get in Bombay thrice a week during monsoons.)

Soon, sirens started going off. From our building, which looked onto the main road, we saw one police car after another rush in the direction of the library, which was a five-minute walk away. An ambulance followed, as did media vans and helicopters. Around nine, we heard from someone that there had been a shooting, the shooter had killed himself, and that they were searching for another suspect. Then things started heating up.

Loudspeakers blared out message after message to stay away from the campus, and if already on campus, to take shelter and lock doors. The seriousness of the situation hit me only when I saw an Armored Personnel Carrier (it looks like a small tank) on the road and what appeared to be an armed cop in a helicopter. Soon, there were sniffer dogs and policemen with guns in our architecture studio. They were doing a building-by-building combing operation. We later came to know that a SWAT team had entered a building after rumours of the suspect being holed up in there. By then, phone calls from concerned family and friends had started pouring in. News of a possible armed suspect on the loose on campus had spread. I repeatedly checked to see if our studio door was well and truly locked. We could see students scrambling to get inside and security personnel screaming at people on the road to take shelter. Strangely enough, nobody panicked. At some point, it became eerily quiet, almost peaceful.

Four hours after we first heard of the incident, the all-clear was sounded. There was only one shooter and he was confirmed dead on the sixth floor of UT Austin’s main library. He’d shot himself with the AK-47 that had terrorised the campus for a morning. There were no other suspects.

Had the day progressed like any other, author John Lott would have talked about his book More Guns, Less Crime on campus that evening. Lott is a research scientist at the University of Maryland. He is known for his active endorsement of the right to use guns. The irony is not lost, especially in Texas, which is one of the most liberal states in the US when it comes to questions of firearms. There is practically no state control on gun-use and an overwhelming number of Texans own firearms. In 2009 alone, 138,768 gun licences were issued by the State of Texas to people 21 years or older. (People who are enlisted or are veterans can get gun licences at 18.) Reportedly, the Governor of Texas has been seen on his morning jogs with a holstered gun at his hip. While it is illegal to carry guns to campus, Texas has been debating a change of that law. In fact, there is an active student organisation countrywide, called ‘Students for Concealed Carry on Campus’, to promote this cause!

In India, a thief would probably snatch a purse, hit the victim on the head and flee. Here, a thief would likelier snatch the purse and shoot his victim dead. A friend asked me if I was scared. I was not. I had locked the doors, informed my dear ones and knew that there were people already on the job to keep me safe. Truth be told, I have felt more unsafe walking along lonely stretches of roads in India than the day when shots were fired less than half a mile from where I sat. The feeling of security, I realised, can be subjective. Why else would a 19-year-old boy take his life?

Eyewitnesses say he had ample chances to shoot people. A professor who was directly in his path escaped unscathed, and a student recounted how the gunman waved him away from the library entrance as he approached it. A construction worker from a building nearby spoke of having looked into the shooter’s eyes, and he obviously lived to tell the tale.

Colton Tooley, a second-year Maths major, got hold of an AK-47, walked through 21st street firing into the air, the trees and the curb before going up to the sixth floor of the library and taking his own life. Had he lived, he would have been an actuarial sciences graduate in three years’ time. People who knew him say he was a quiet boy, an honours student at high school. He lived with his parents, who have no idea why he took his life.

Mikhail T Kalashnikov designed the automatic for the greater good of his country. He’d said at a United Nations Conference, “I fervently hope that this weapon will always be used in the service of peace, security, honour and justice.” I sincerely hope that while there may be no honour and justice in his death, the family of the troubled young man, Colton Tooley, believe he found peace one way or another on that crisp morning.