Where the poppies blow between the crosses, row on row 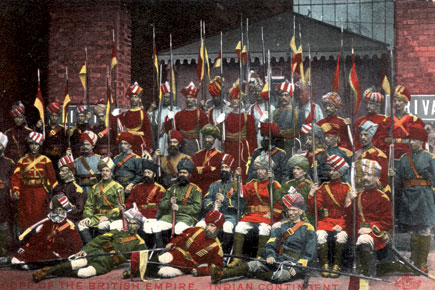 
The windswept loneliness of the small white cupola at the top of a wide flight of granite steps above the Sussex Downs reminded me of Singapore’s sparkling Outram Park metro station. The link was Lalu (Lal Singh), an innocent Punjabi peasant who fights for the English in Mulk Raj Anand’s First World War novel, Across the Black Waters. Both the Chhatri (as the Downs memorial is called) and Outram Park recall that war-to-end-all- wars in which India’s leaders sacrificed more than 74,000 young Lalus on the altar of their political ambition. Their death was the price our nationalist elite eagerly paid for the promise of swaraj after the war.

There was quite a flutter on the country bus from Brighton (where I was staying with my son), when I asked for Patcham, the village at the foot of the hill on which the Chhatri stands. Several passengers knew it. “‘Chhatri’ means umbrella, doesn’t it?” one asked. An old man said he had got lost once trying to go up. Another recalled playing by it as a child. “Say a prayer for me when you are up there,” someone said as I disembarked to trudge up the empty hill where 53 soldiers—who fought in France like Lalu but died in Brighton—were cremated, their ashes scattered over the English Channel. Only some Friesian cows witnessed my panting ascent.

In contrast, Outram Park throbs with activity. But even among the Indian Singaporean commuters, many are ignorant of, or indifferent to the grim memory it enshrines. I chanced upon the commemorative plaque after visiting the nearby Singapore General Hospital, and SR Nathan, the then president of Singapore, filled in the details. Outram Park’s Hokkien name of si pai poh means ‘Sepoy plain’, named after the nearby Sepoy Lines and parade ground. Being an all-Muslim (Ranghar Rajput and Pathan) regiment, the 5th Light Infantry, which mutinied on 15 February 1915, was especially sensitive to national and religious propaganda. Ghaddar Party incitement was one provocation, while the Turkish Sultan Mehmed V’s fatwa urging Muslims to oppose the Allies was another. A third was the rumour the regiment would go to Europe to fight the Caliphate; and an unpopular and unsympathetic British commander was the clinching factor.

Nathan told me that the mutineers expected Singapore’s German prisoners of war to join them. Disappointed, they attacked and killed 47 British soldiers and civilians in the seven days before British troops helped by French, Russian and Japanese naval detachments captured them. More than 200 sepoys were tried for treason. Seventy-three were jailed for up to 20 years, and 64 transported for life. The Straits Times reported that more than 15,000 people packed the slopes of Sepoy Lines to watch a firing squad gunning down 47 others.

The massacre is forgotten. Yet, it exposed the tortured relationship between Britons and Indians more sharply than stirring legends of India’s military contribution could hide.

A great-uncle’s racy chronicle of fighting in Egypt, the Dardanelles, the Balkans, Mesopotamia and Iraq, Through war, rebellion and riot, 1914-1921, introduced me to the war. Kunal Chandra Sen—Acharya Keshub Chandra Sen’s grandson—was credited with organising the field post office for Indian servicemen abroad. I also heard a great deal about the heroic Laddie (Indra Lal Roy), an ace pilot with the Royal Air Force who achieved 10 “kills” before the Germans shot him down over France on 22 July 1918. Nineteen-year-old Laddie, great-uncle of NDTV’s Prannoy Roy, was the first (and probably only) Indian to receive a posthumous Distinguished Flying Cross.

The stories of Laddie and Kunal Sen can’t have had much resonance beyond their own Westernised upper middle-class Bengali milieu; and that also applies to the first Lord Sinha, the only non-White member of the War Conference in London and India’s representative at the 1919 Versailles Peace Conference.

Another ace pilot, HS Malik, who survived the war to serve independent India as a distinguished diplomat, was also exceptional. The war’s truly unique phenomenon was the Nizam of Hyderabad who bought the titles of ‘His Exalted Highness’ (he wanted ‘His Majesty’) and ‘Faithful Ally of the British’ by contributing Rs 60 lakh and two regiments to Britain’s defence.

They were as distant from mass reality as the passionate loyalty (“The English Empire is as one great family under one beneficent Crown”) that Sir Gangadhar Chitanvis and the Raja of Mahmudabad professed in the Legislative Council on 8 September 1914. Edwin Montagu’s declaration of 20 August 1917 that indicated some kind of self-government within the empire impressed politicians, but was unlikely to have influenced village calculations in Punjab and UP. All that the lusty rustic lads understood of the Biblical riddle of Mahatma Gandhi’s “Seek ye first the Recruiting Office, and everything will be added unto you” were the words “Recruiting Office”.

Even the elaboration of Gandhi’s message in Surendranath Banerjea’s Bengalee newspaper would have baffled them. They didn’t need the face-saving hyperbole of the Bengalee editorial, ‘Behind the serried ranks of one of the finest armies in the world, there stand the multitudinous people of India ready to cooperate with the Government in the defence of the Empire, which for them means, in its ultimate evolution, the complete recognition of their rights as citizens of the freest state in the world.’ They needed jobs. Anand’s Lalu and his comrades waited ‘uncomprehending and still, ignorant of what awaited them in the murderous devices of the devil who controlled their destinies’. They were the cannon fodder Indian politicians offered Britain in return for self-rule. A London music-hall parody ran:

We don’t want to fight;
But by Jingo, if we do,
We won’t go to the front,
We’ll send the mild Hindoo.

Lalu knew nothing of Gavrilo Princip, the man who shot dead an Austrian prince and his wife in Sarajevo on 28 June 1914, sparking off World War I. Nor did he know much about the Austro-Hungarian, German, Tsarist and Ottoman empires he was fighting. More than a million young recruits like him, as well as soldiers from 29 princely states, not to mention sailors and non-combatant labourers, risked their lives for a country and a cause that meant nothing to them. The Western Front alone had two Indian infantry divisions, two cavalry divisions and four field artillery brigades— 138,608 soldiers in all. Anand calls them ‘conscripts, brutalized and willing to fight like trained bulls, but without a will of their own, soulless automatons in the execution of the army code, though in the strange dark deeps of their natures, unschooled by the Sarkar, there lay the sensitiveness of their own humanity, their hopes, their fears and their doubts.’ Recruitment ‘greatly surpassed all expectations’, wrote the historian LF Rushbrook Williams. Even the London Times marvelled disingenuously that Indians without blood ties with Britain should rally in such numbers to its flag.

The brutal answer severely indicted the bleak Indian conditions Lalu and his peers hoped to escape. It didn’t matter to them that they were being traded—flesh and blood, bone and muscle—for political power. Their own compulsions were more fundamental. Peasant families were even larger in those days, and landholdings already becoming smaller. Third and fourth sons had nothing to live on; and perhaps the martial tradition of some communities was an added inducement. The Duke of Connaught noted that Lalu’s Punjab had become a “household word” because of “the splendid fighting qualities displayed” by Punjabis. They accounted for more than half the manpower India mustered. The Doaba region led in providing recruits, just as it led the emigration drive 50 years later. Necessity forced Britain to abandon the Whites-only Crimean and Boer war recruitment policies and allow India’s Lalus to shed blood, lay down their lives and even be paid for it.

Nor was Britain ungrateful. King George V had Brighton’s Royal Pavilion converted into a military hospital for Indian soldiers, believing that the ornate onion domes, minarets and pillars of Indo-Saracenic fantasy would make them feel at home. He and other royals visited them there. Nine kitchens and other areas that were cordoned off for worship catered to Hindu, Sikh and Muslim dietary and religious needs. Organised tours took recuperating soldiers to see the sights of London.

Indians acquitted themselves with conspicuous bravery in East Africa, Japan, Egypt, Turkey, Palestine, Mesopotamia, France and Belgium. Europeans were impressed from the moment these men landed at Marseilles. Khudadad Khan won a Victoria Cross, the first of 12 awarded to Indians during the First World War (six on the Western Front), at the Battle of Ypres. This battle is notorious for the first use (by Germans) of poison gas. The casualties were heavy: 840 missing or captured, 16,400 wounded and 7,700 killed. Some of the dead lie in the desolation of Flanders fields where ‘the poppies blow/ Between the crosses, row on row’ in John McRae’s moving poem.

Sir Herbert Baker, who designed North and South Block in Delhi, also designed the main memorial to the Indian Army on the Western Front at Neuve Chapelle in northern France, which was the scene of the British army’s first major attack after the miserable winter operations of 1914-15. Maharaja Bhupinder Singh of Patiala had already unveiled another memorial, Brighton’s Pavilion Gateway, in 1921, while it was the Prince of Wales (Duke of Windsor) who unveiled the Chhatri. Standing there, I telephoned an old colleague, Philip Crosland. He had suffered greatly as a Japanese prisoner in the Second World War, but had struck a blow for racial fair play by refusing the special golden jubilee compensation until assured that Indian soldiers who suffered similar privations would also be rewarded.

The Chhatri’s stark simplicity is a poignant reminder of the motivation that unites Silicon Valley billionaires, Oxbridge dons and daily labourers in Malaysia with these soldiers of fortune. The trend continues to this day with India jostling Bangladesh to provide the most troops for UN peacekeeping missions. Lalu felt special among other economic refugees for ‘he was going to Vilayat after all, England, the glamorous land of his dreams, where the sahibs come from, where people wore coats and pantaloons and led active, fashionable lives—even, so it was said, the peasants and the poor sahibs.’ He escaped the death that the Chhatri honours, but returned from war to find his family destroyed, his parents dead and the land for which he sold himself gone forever.

The bigger picture changed as well. The First World War prompted the Industrial Commission of 1916; and Lord Sinha, as Under-Secretary of State for India, piloted the Government of India Act of 1919 through the British parliament. Indians became eligible to become the King’s commissioned officers; one of the first was Rana Jodha Jung Bahadur, who commanded the Tehri-Garhwal Sappers and Miners from 1915 to 1919. The War also gave a fillip to the Ghaddar and Jugantar revolutionary movements, and produced men like Rash Behari Bose and Jatin Mukherjee (‘Bagha Jatin’), in whom Lord Hardinge claimed in his memoirs, My Indian Years, to have ‘discovered a real leader of men’. As for Lalu and his kind, Alfred Edward Housman said it all in his Epitaph on an Army of Mercenaries:

These, in the day when heaven was falling,
The hour when earth’s foundations fled,
Followed their mercenary calling
And took their wages and are dead.

Their shoulders held the sky suspended;
They stood, and earth’s foundations stay;
What God abandoned, these defended,
And saved the sum of things for pay.

Whatever their motive, Britain has good reason to be grateful to them.