Nikki and Bobby Come to Town

Whatever their future, Nikki Haley and Bobby Jindal have got Indian-American knickers in a colossal twist 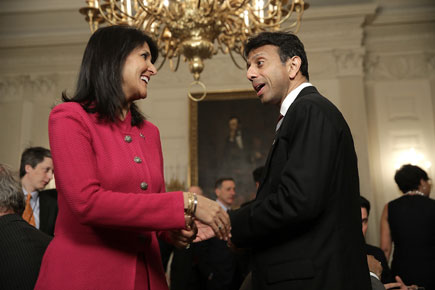 American politics, once a place of White men with a pinch-size sprinkling of White women, Blacks, and Hispanics, took on a fleeting Indian hue these last few days.

Two Republican governors of southern states, Nikki Haley of South Carolina and Bobby Jindal of Louisiana, hit the headlines for different reasons. Actually, let me rephrase that: Haley scored headlines, Jindal made a play for them and failed. He did make it to the ‘inside pages’, to be fair—and to use the quaint vernacular of Old Media—but the news of his announcement that he would run for president as a Republican candidate was greeted with reactions that ranged from charitable yawns to derisory guffaws.

It is fashionable to kick Jindal these days, just as it is fashionable (though still grudgingly so, in Democratic circles) to offer praise to Haley. Jindal is a fascinating figure, in that he draws his most vicious odium from ‘his own’ people. I put those words in inverted commas because he has insisted, on more than one occasion, that he would rather be identified as ‘American’ than as ‘Indian-American’, a laudable enough sentiment when looked at dispassionately. Announcing his presidential candidacy in New Orleans, Jindal said, “We are not Indian-Americans, African-Americans, Irish-Americans, rich Americans, or poor Americans. We are all Americans.”

But Indian-Americans, as a whole, do not do dispassion well; and, instead, they have pilloried Jindal on Twitter and other social forums with hashtags such as #JindalIsSoWhite. The comedian Kumail Nanjiani tweeted, ‘Hey guys. My people are looking to trade Bobby Jindal. In return we’ll take literally anything’. (A tangent: Nanjiani is a Pakistani-American. Jindal has managed the feat of reuniting the Indian Subcontinent.) Somewhat more coarsely, Asif Mandvi (another stand-up comedian) tweeted, ‘U might be a #Jindian if u r the son of immigrants who is anti-immigrant.’

Most Indian-Americans are an infuriating, thin-skinned bunch, their runaway success in this country notwithstanding. Always on the alert for cultural slights, theirs is a largely mercenary attachment to American society. They take the best that America has to offer—and why should they not; they are well-educated, on average, and well-oiled as a cooperative unit—but are loath to give back very much more than their labour. They favour community cliques and cultural ghettos, and regard ‘American culture’—which they caricature as a mixture of excessive liberty and too much choice—with grave suspicion. They are ‘drop in’ immigrants—like those drop-in cricket pitches so popular these days: situated on American soil, but not an organic part of it. And that is by Indian-American choice, not the result of anyone’s exclusion.

The widespread cultural assault on Jindal convinces me that the Louisiana governor’s offence is (a) being Republican, and a particularly ideological one at that, with a belief in free markets, small government and the duty of immigrants to integrate; and (b) his conversion to Catholicism. The first enrages liberals, among whom there are many more Indians than there ought to be, given their material situation in American society. The second, Jindal’s rejection of the religion of his parents, incenses Hindu-Americans, of whom—as Narendra Modi’s visit last year demonstrated—there is an impressive number of vocal representatives. Jindal is, in effect, disparaged by an unholy alliance of the Indian-American- liberal-left and the Hindu-American-raucous-right.

Of course, Jindal has done himself no favours by being quite so adamantly doctrinaire in his politics, and quite so precocious. Precociousness can be regarded with suspicion by the public, especially when the young overachiever doesn’t always leaven his certitudes with humility. He was running the entire Louisiana health system at 25; was elected to the US House of Representatives at 33; has been twice elected Governor of Louisiana (winning first at 36); and is, at 44, the first Indian- American (whether he describes himself thus or not) to run for President of the United States.

But one can’t help feel that Bobby Jindal has peaked. He will not win the Republican nomination, and after that—given that Hillary Clinton will be President for eight unstoppable years— he has nothing to look forward to but the political wilderness. There is talk of his candidacy being a thinly-veiled play for the running mate’s slot, or a position in the cabinet; but such talk is predicated on a Republican victory in the 2016 presidential election. And that is… Not. Going. To. Happen.

Jindal’s Indian-American ‘twin’, on the other hand, is just getting started. Haley, too, has been derided by desi-American- lefties for her political conservatism. There is, among this cohort, the belief that an ‘Indian Republican’ is, by definition, an oxymoron. So if you’re Republican, you’re a race-traitor. Desi- American-Hindus hyperventilate less about Haley than they do about Jindal because she converted to Christianity from her parents’ Sikhism. Had Mr and Mrs Randhawa been Hindu, all hell would have erupted.

As Jindal hits a roadblock (albeit one dressed up as a declaration of presidential intent), Haley has set off a chain-storm of national debate with her call to take down the Confederate flag outside the South Carolina statehouse in the aftermath of the racist murders in a church in Charleston. I grant that she had not objected to the flag before. But virtually no southern Republican politician had, BC—Before Charleston—so expecting Haley to have done so would be asking her to have abided by a standard that her party did not set for itself. Those who pillory her for taking an expedient anti-flag stand after the massacre fail to recognise how galvanising of change it was to have the Governor of South Carolina—that most adamant of Confederate states—speak out forcefully for change, and to do so in terms that were so unmistakably moral. She could have taken refuge in pieties and platitudes. She did not.